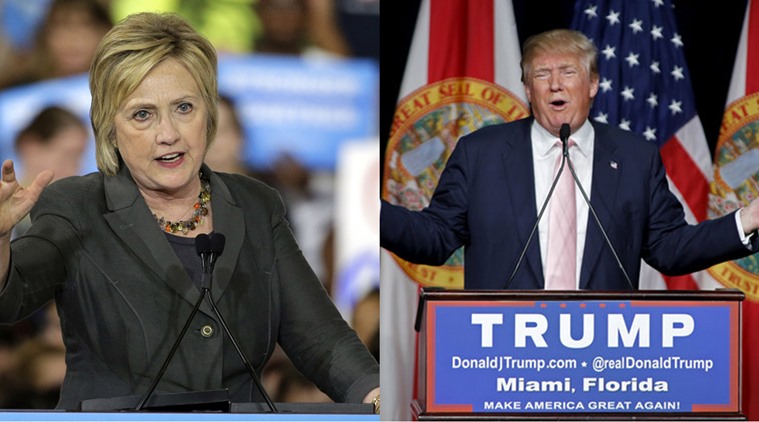 It was shots heard around the world.

The U.K. voted Friday to withdraw from the European Union left the 2016 presidential candidates on both sides talking about the outcome, with Donald Trump calling the Brexit vote as a “great thing” while Hillary Clinton issued a warning sign.

In a scheduled foreign trip to Scotland, GOP presumptive nominee Donald Trump took a break from the campaign trail to attend the reopening of his recently-renovated resort, Trump Turnberry. Landing on the heels of the Brexit vote, Trump during his press conference celebrated the vote while drawing parallels with his own campaign.

“I love to see people take their country back,” Trump told reporters at a press conference. “And that’s really what is happening in the United States. Come November, the American people will have the chance to re-declare their independence. Americans will have a chance to vote for trade, immigration and foreign policies that put our citizens first and will have the chance to reject today’s rule by global elite.”

The narrow results— 52% for leave with 48% for remain, became a historic decision based off the referendum campaign heeded the call to liberate the nation. The politics behind the referendum campaign was propelled by a nation angry towards politicians and establishment figures, lost of nationalism, and most of all, opposing the influx of immigration. The very exact themes driving Brexit are the same driving the narrative of the 2016 race that led to Donald Trump to victories in the Republican primaries, leaving the Democrats to wonder if there could be a repeat in November?

“I think there are great similarities between what is happening here and my campaign,” Trump said. “People want to see boarders. They don’t necessarily want people pouring into their country that they don’t know who they are and where they come from.”

Taking a swipe at his Democratic rival, Trump slammed Hillary for publicly opposing Brexit, only because “President Obama wanted it. “[Hillary] was 100 percent wrong and she doesn’t want to go on camera because she is embarrassed,” Trump said. “She always misreads everything, she misread this and the only reason she did it is because Obama wanted it. She does whatever he wants her to do and obviously for the 219th time, they were wrong. They are always wrong and that’s the problem with them.”

Democratic presumptive nominee Hillary Clinton issued an brief statement instead of holding a press conference, to frame the vote is a leadership test between experience vs. unfit.

“This time of uncertainty only underscores the need for calm, steady, experienced leadership in the White House to protect Americans’ pocketbooks and livelihoods, to support our friends and allies, to stand up to our adversaries, and to defend our interests,” Hillary said in a brief statement. “It also underscores the need for us to pull together to solve our challenges as a country, not tear each other down.”

Clinton aides held a conference call with reporters Friday afternoon after Trump’s conference, downplaying the parallel remarks between the British and U.S. elections are profoundly different, saying the voting Americans will be making in November is a different election than the one facing the U.K.

“Britain and the United States are different countries,” Clinton’s communication director, Jennifer Palmieri said. “It is really important to recognize that a vote on whether the U.K. stays in or leaves the European Union is profoundly different from a vote for who should be president and commander in chief of the United States. This American election is about what’s happening here is America, and not what’s happening in Yorkshire or in Cardiff.”

The campaign aide continued to bash Trump, calling him a “reckless and erratic egomaniac” based off his reaction to Brexit and his obsession to his golf business at a time of global crises. “The press conference he held at his gold course in Scotland this morning should astonish all of us,” Clinton’s senior advisory policy Jake Sullivan said. “Donald Trump is rooting for economic turmoil in the wake, saying the falling of the British pound is good for his golf business. He said that running a golf course is just like running a country. The American people need a steady hand at the wheel will easily drive us off a cliff.”

There Can Be No Capitalism, No Republic - Without Independence