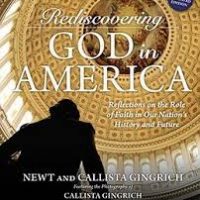 It should come as no surprise to anyone that the United States of America was founded as a Christin nation. Protestant people, guilty of the unforgivable sin of seeking God in their own way, had fled Europe for the New World, and they brought their cherished faith with them. That faith taught humility, love for one’s neighbors, and the importance of charity. These people were the earliest settlers of the land that would eventually become the US, and their spiritual traditions would inform and describe those of the first true Americans. They would also give rise to the practice of religious liberty that is so precious in our country today.

One man who understands this is the former Speaker of the House, Newt Gingrich. He has published a new expanded version featuring beautiful original photographs by Callista Gingrich. “Callista takes you on a walking tour of the great monuments and memorials in our nation’s capitol. Rediscovering God in America”, in which he confronts the sad, mistaken belief prevalent in this country today that the Founding Fathers were determined to banish God from any and all place in American government. Isolated lines from the writings of these men are taken – often out of context – as “proof” that they envisioned a strictly secular government. For example, much is made of a letter written by Thomas Jefferson, in which he mentions a “wall of separation between Church and State”. Gingrich clarifies that this is but a small part of Jefferson’s story. Less often mentioned is the fact that our third President attended church services – in the US Capitol building. And while we’re talking about things he wrote, let’s throw in this helpful phrase penned by him: “Can the liberties of a nation be secure when we have removed a conviction that these liberties are the gift of God?”

The primary point of Gingrich’s book is to discuss the various important monuments from our nation’s past, because many of these speak to the importance and indelible nature of its religious founding. For instance, the well-known Washington Monument (dedicated, of course, to George Washington, our first President and a strong believer in the power of religion to generate political prosperity for a nation) bears the Latin inscription “Laus Deo”, or “Praise be to God”. The Lincoln Memorial hosts the conclusion to Abraham Lincoln’s famous Gettysburg Address, which reads: “We here highly resolve that these dead shall not have died in vain, that this nation, under God, shall have a new birth of freedom.” And the Monument to Thomas Jefferson, whom we discussed above, echoes the words of the man whom some would only remember for his “wall of separation” line: “Almighty God hath created the mind free. All attempts to influence it by temporary punishments or burthens…are a departure from the plan of the holy author of our religion.”

It is impossible to divorce the nation’s founding from a deep faith in and reverence for God, and contrary to the misconceptions of some, to separate our Founding Fathers from those same beliefs. This country was founded by people who personally knew religious domination of a style so completely eradicated by their courage as to be nearly unimaginable to a modern audience: They had seen a world in which kings and other powerful government officials might impose a particular set of religious beliefs on the populous, with dissenters being swiftly and severely punished. It is this brand of spiritual tyranny that our Founding Fathers sought to stamp out in the infant United States of America, not the notion – which would have been have abhorrent to them and it is to many today – that faith in and of itself was an evil to be eschewed from government entirely. People like Newt Gingrich understand this important message, and books like “Rediscovering God in America” help remind us all of it.