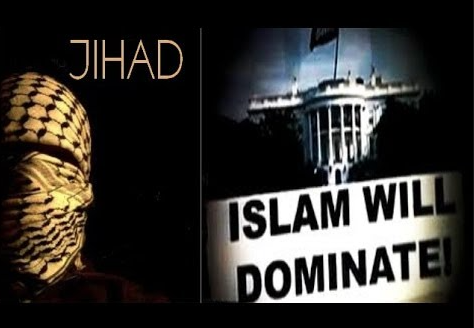 Ssshhhh—don’t tell anyone, but Orlando isn’t the only state that’s been hit with a jihadist attack during the Muslim holiday Ramadan.  There’s been a rash of them happening all over the place, but other than Robert Spencer’s Jihad Watch, you probably didn’t know.

Soon after the Orlando jihad attack others also took place during Ramadan in the Philippines, Paris, and possibly one in Amarillo, Texas.  Unfortunately for the jihadists in the Philippines and Paris, they didn’t get as much media attention because they used knives instead of guns…

PARIS JIHADIST #1:  The first Paris jihadist killed a policeman and his wife and threatened to kill a toddler.  From Robert Spencer’s Jihad Watch:

Islamic State spokesman Abu Mohammad al-Adnani has called on Muslims to “get prepared, be ready … to make it a month of calamity everywhere for nonbelievers…especially for the fighters and supporters of the caliphate in Europe and America.”

This Muslim killed the policeman and his wife with a knife. Clearly we need knife control.

A policeman and his wife were killed in a frenzied knife attack at their home in a Paris suburb on Monday night by a man who reportedly shouted “Allahu Akhbar”.

French police sources said the unnamed killer had pledged allegiance to Islamic State of Iraq and the Levant.

Isil claimed responsibility for the killings in a statement released by the Amaq news agency, the group’s propaganda outlet, which it also used to announce that the Orlando massacre was perpetrated by an Isil fighter.

The couple’s three-year-old son was rescued after police stormed the home in the north-western Paris suburb of Magnanville and shot dead the attacker.

He stabbed the 42-year-old officer, who held the rank of “commandant” (commander), nine times in the stomach at his front door. After stabbing the policeman, the attacker forced his way into the home.

It was unclear how the policeman’s wife was killed. She worked as a secretary at a local police station.

The child was rescued and was “shocked but unharmed”, Pierre-Henry Brandet, the interior ministry spokesman, said. Five detonations or shots were heard by millions on live television while Mr Brandet spoke to reporters as police stormed the home….”

Horror as teenage girl ‘stabbed as sacrifice’ during Ramadan,” by Tom Parfitt, Express, June 14, 2016 (thanks to Henry):

A MUSLIM man has stabbed a teenage girl three times as a “sacrifice” during the holy month of Ramadan, according to reports.

Lawyers claim the the 19-year-old was knifed twice in the wrist and once in the abdomen during the Islamic month of fasting.

The man, 32, is said to have told police he had heard voices ordering him to “commit a sacrifice” to coincide with Ramadan.

He has been sent to a psychiatric hospital and the girl’s wounds are not life-threatening, according to a lawyer in Rennes, France.

The attack is believed to have taken place outside the city’s Lycee Chateaubriand, where the girl studied, at 4pm local time.

The man, who has not been identified, reportedly told officers he was Muslim before handing the blade to them.

Prosecutor Nicolas Jacquet said: “Voices told him that he had to make a sacrifice on the occasion of Ramadan.”…

They beheaded him when their ransom demands were not met. This is all according to Islamic law. Here is a salient passage on this issue from a Shafi’i manual of Islamic law:

When an adult male is taken captive, the caliph considers the interests … (of Islam and the Muslims) and decides between the prisoner’s death, slavery, release without paying anything, or ransoming himself in exchange for money or for a Muslim captive held by the enemy. (Umdat al-Salik (Reliance of the Traveller) o9.14)

A revered Islamic jurist, Al-Mawardi, agrees with Reliance of the Traveller:

As for the captives, the amir has the choice of taking the most beneficial action of four possibilities: the first, to put them to death by cutting their necks; the second, to enslave them and apply the laws of slavery regarding their sale or manumission; the third, to ransom them in exchange for goods or prisoners; and fourth, to show favor to them and pardon them. (Al-Ahkam As-Sultaniyyah (The Laws of Islamic Governance), 4.5)

“‘Vicious and brutal’: A second Canadian man is beheaded by Islamist militants in the Philippines,” by Ben Guarino, Washington Post, June 14, 2016:

A small group of Islamist militants in the Philippines, known as Abu Sayyaf, has beheaded a second Canadian hostage in two months, authorities said Tuesday.

“We strongly condemn the brutal and senseless murder of Mr. Robert Hall, a Canadian national, after being held captive by the Abu Sayyaf group in Sulu for the past nine months,” Herminio Coloma, a representative for the Philippines President Benigno Aquino, said in a statement, according to AFP. A head believed to belong to Hall, 58, was found Monday on an island near an Abu Sayyaf outpost.

In April, the same group decapitated Canadian John Ridsdel, a 68-year-old businessman. Gunmen had kidnapped Ridsdel and Hall, along with Hall’s Filipina partner Marites Flor and a resort manager from Norway named Kjartan Sekkingstad, from the island of Samal in September….

Abu Sayyaf has a decades-long history of taking hostages and demanding ransoms, which both the Canadian and Philippine governments oppose paying. AFP reports that Abu Sayyaf murdered Hall when a $6.5 million ransom demand was not met….

Also in a completely unrelated event during Ramadan, a Somali Muslim was shot to death after taking hostages in an Amarillo, Texas Walmart.  Authorities immediately called it ‘workplace violence’.  Robert Spencer wrote, “‘We do consider this a work-place violence situation at this point.’” You know, like Fort Hood. Maybe this is a genuine workplace violence situation, but since a Somali Muslim is involved and we are so constantly lied to by authorities about jihad attacks, the possibility can’t be discounted that it is something more than that as well.”

Rush Limbaugh: Obama’s Values not Traceable to our Founding

2 Days BEFORE Orlando Jihadist, DHS Tells Officials Not to Use Words 'Jihad', 'Sharia'