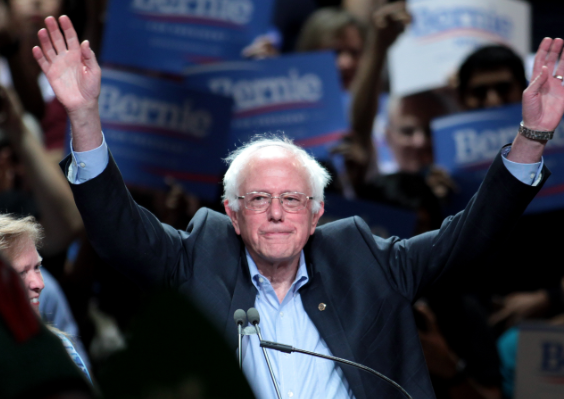 As election day approaches, Californians are seeing Bernie Sanders giving sermons on the high-def TV mount. He sounds wonderful on the telly as he promises to deliver his children out of the bondage of work, tuition and life’s obligations; and he will eventually lead them into a land of persistent rainbows where everything is free. If his promises continue to grow, his campaign may soon force businesses to pay people to take goods from their stores.

The liberals that I know here are swooning over Bernie’s promises and pitches; he is their savior. His promises are like the old biblical story of the loaves and fishes. All these benefits for the Sanders voter will appear out of nowhere; they will be free and they will just keep coming.   Bernie is a miracle worker!

Let’s get realistic. Any voter that falls for Bernie’s sales pitch is either horribly ignorant or downright greedy. None of the things that Bernie is promising is free. Everything is the result of someone’s labor. Bernie wants to use the government’s power to take from some people to give to others in return for their votes. This Sanders tactic is the worst form of campaign financing.

Think about it: People are not donating anything to the politician, but the politician will steal from others with the full force of government, then redistribute the proceeds by giving benefits to the voters. It is horribly corrupt – yet our media is snoozing on this issue; on purpose, I believe.

Bernie has a crafty delivery: He messages that you, the Sanders voter, are the victim of the super-rich one percent, maybe the two percent. He tells you that you deserve to get things from those horrible people and Bernie is the guy that will do it.

Once any fool starts believing they are a victim, they demand compensation. This is actually a continuing tactic of the Democrat Party. But Bernie Sanders has elevated that to a presidential platform.

Despite his sounding altruistic, Sanders is not a good soul – because what he is doing is spiritually wrong.   Consider the Ten Commandments. The final commandment is the one that people usually break first; they break it before they steal, lie, or cheat. That commandment is: Thou Shall Not Covet. Coveting leads to all those other sins, including war and murder.

The entire platform of the Democrat Party, and Bernie Sander’s platform, is based on coveting. Sanders admits that he’s going to steal from others by using the force of government. And while he performs this swindle, he will gain riches beyond everybody else – except the one percenters that he has targeted.

Our nation is falling for these professional redistributors for two reasons. First, greed. Giving the public full influence over the finances of a nation is a danger that has been communicated to us since the days of Plato. That’s over 2300 years for those of you who don’t read these lessons; which brings us to the second reason, the lack of education.

The citizens from the late 1700’s spent their winters studying and preparing for the upcoming spring. The book of its day, Thomas Paine’s “Common Sense,” was widely read by the common citizen.   If you read just the first few pages, you will realize that today’s high school student wouldn’t be able to understand it. The cognoscente of early America were able to read history in several languages, most often Greek and Latin. The knowledge they worked for led them to understand the dangers of an overreaching government.

But today’s Joe has decided to spend his long winter hours being entertained. Movies, video games, talent contests and survivor series are the important matters in today’s home. No study leads to no knowledge, so the Bernie voter doesn’t understand nor care about the dangers of an overactive government; instead, they embrace it.

Debating these people is a futile act, for knowledge and common sense mean nothing to them. Their opinions are formed by emotion and protected by emotion. And to solidify their party membership, their cult tells them that they are smarter than conservatives, a belief that they take to heart.

Here’s a good example of this process: I have a veteran friend that I respect greatly, despite his being a Bernie Sanders supporter. Now get this, he also claims to be a follower of the Constitution! Zounds! There exists no greater philosophical divide than the one between the politics of Bernie Sanders and the Constitution’s order. The Valles Marineris is dwarfed by that chasm. Yet my friend claims that I am the one with the closed mind. It is in this example that we see the lack of education, and the conceit of being a liberal, in its full bloom.

Our current president has doubled our national debt in the last 7.5 years. We now have the greatest debt in the history of the world. But the Bernie supporters are unfazed by this problem; they want to bring on a tsunami of new debt. Hey, if it’s from Bernie, It’s free!

Bernie is not a god, nor the son of one. He’s a con man who wants to use government to take from others to pay for your votes. The Sanders fans need to address the horrible costs that will land with Bernie calling the shots from the White House. It isn’t free. Nothing is.

Hero Worship: Is Saying 'We've Gone Too Far' an Understatement?