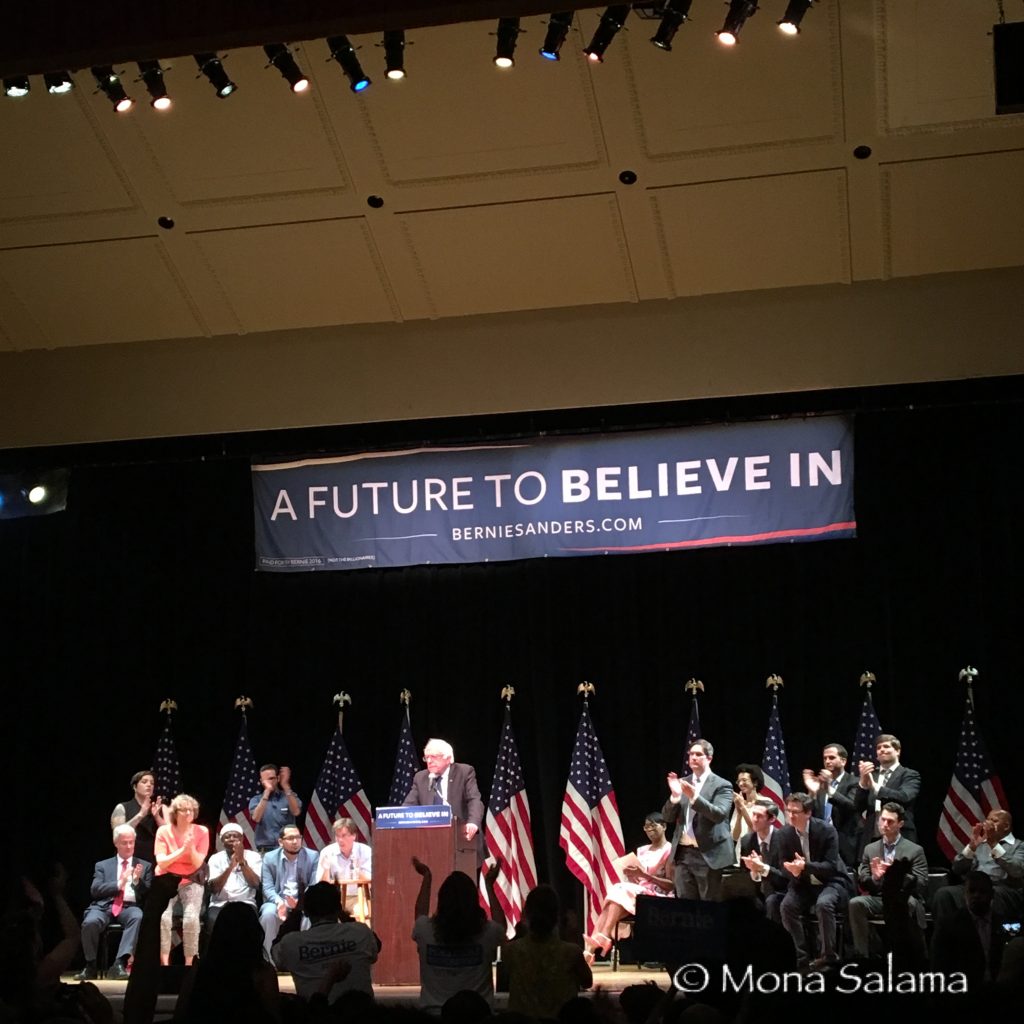 New York, NY. — After being mathematically eliminated from clinching the Democratic presidential nomination, Vermont Senator Bernie Sanders remains a presidential candidate, returning back on the campaign trail to galvanize his supporters for a “political revolution” against the Democratic establishment.

Titled as “Where We Go From Here” speech, it was widely expected that Sanders would bow out of the presidential race. Instead, the once quiet Democratic Socialist Senator has now become a political celebrity, energizing independents and millennials based off his populist views. Speaking Thursday evening to supporters, many carry #NeverHillary signs and wearing #HillNo buttons, Sanders detailed his plans of what exactly he will be doing from now until next month’s Democratic National Convention  — transforming the Democratic Party with his “political and social revolution” ideas.

“As we head towards the DNC, I often hear the question “What does Bernie want?” Sanders said to over a thousand of supporters gathered in The Town Hall venue near Times Square. “This is not about what Bernie Sanders want, it’s about you and millions of other people who want a political revolution.”

Framing out his convention platform fight, Sanders made clear the populist agenda he will push in the upcoming convention. He specifically pointed to the rules and platform committee in seeking to change rules regarding to eliminating closed primaries and eliminate superdelegates.

“As we speak, literally, there are meetings of the Democratic platform committee that will come out of the Democratic convention that will be by far the most progressive platform in the history,” Sanders said, as supporters began screaming “Run, Bernie, run, a push for the Senator to run third-party instead. “We have great people on the rules committee, and one of the issues that we’re going to push for on the rules committee is to end closed primaries. It is also a fight to end the absurd situation where superdelegates can overrule the rule of the people.”

Prior to his speech, a Washington Post Op-Ed by the Senator laid out his manifesto of the progressive reforms he is pushing for a “political revolution.” Policy change Sanders states he wants included an “economic and political system for all,” remove Super Pacs, fix the criminal justice system, and recognize that climate change is real. Missing from this Op-Ed were a number of issues the Senator and his opponent differed throughout the primary season. Such issues were increasing the federal minimum wages, ban on fracking, universal healthcare, and tuition free college.

“We are going to change that,” Sanders said, after laying out all his progressive talking points. “And while we are at it, we may as well transform the entire Democratic Party.”

Sanders added, “We’re going to go all over this country because that is what the political revolution is about. It is millions of people getting involved in the political process in a way that has never been seen in the modern history of this country.”

Since losing the New York Primary in April, Sanders momentum would decline in a rapid pace. His fundraising efforts declined with his recent filing showing he raised only $16 million in May compared to $27 million in April and $47 million in March. Losing the California primary, his last only hope, would turn the election battle between Donald Trump and Hillary Clinton as the news media considered him an afterthought in the news cycle. Days after Hillary was announced the presumptive Democratic nominee after securing the threshold needed, many popular leaders including President Obama, VP Joe Biden and Senator Elizabeth Warren began to endorse her candidacy gearing up for a brutal general election.

Ignoring calls from the Democratic Party to drop out and endorse Hillary, Sanders for weeks insisted he is staying in the race and refused to endorse his rival. An endorsement from Sanders is considered to be key in uniting the party to defeat Trump. The prolonging of his endorsement is bringing fear to Democratic party leaders as Trump is working hard to win over his supporters.

On Wednesday, he would finally acknowledge the obvious in an interview on CSPAN, saying “It doesn’t appear that I’m going to be the nominee.”

Sanders didn’t mention Hillary once during his remarks. Prior to the town hall rally, Sanders told talk-show host Stephen Colbert in a taped segment of The Late Show with Stephen Colbert that he had no immediate plans on endorsing Hillary, instead focusing his time on his “political revolution” movement, defeating Donald Trump, and bringing new people into the political process.

However, Sanders would mention Trump towards the end of his speech.  He pledge to “work tirelessly” to prevent Trump from become president, even promising to run all over the country to do so. “We have got to work tirelessly to make sure Donald Trump is not president,” Sanders said as the raucous diehard supporters cheered. “I’ll run around the entire country if I have to. It is hard to imagine a man who has such limited capabilities becoming president.”

Concluding his remarks, Sanders gave his supporters exactly what they wanted to hear — refusing to drop out.

“The struggle continues,” he declared to thunderous applause,