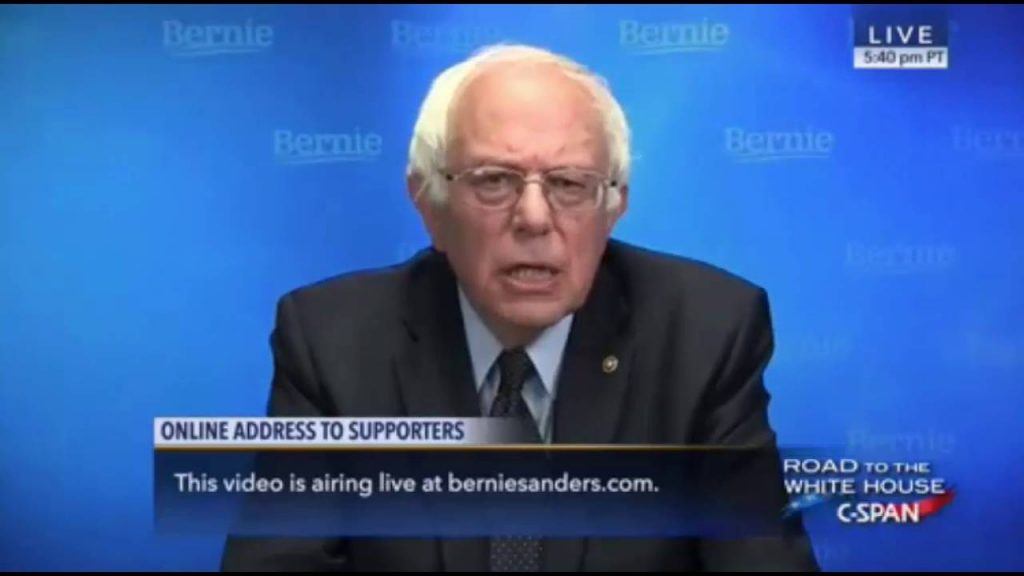 Vermont Senator Bernie Sanders in a live-streamed address Thursday night, declining to concede the Democratic presidential nomination to Hillary Clinton and promising to take the fight onwards to Philadelphia on July 25th.

“We must take that energy into the Democratic National Convention on July 25 in Philadelphia where we will have more than 1,900 delegates,” Sanders said in his address.

Promising to continue his political revolution to “transform the Democratic Party,” Sanders vowed that he would work with his Democratic rivals to defeat GOP likely presumptive nominee Donald Trump in the general election, but in “a very short period of time.”

“The major political task that we face in the next five months is to make certain that Donald Trump is defeated and defeated badly,” Sanders said. “We cannot have a president who insults Mexicans and Latinos, Muslims, women and African-Americans.”

The 23-minute video address comes two days after both Democratic candidates met before the Washington D.C. polls were closing, to discuss a possibility of Sanders reconciling to unite the party against Trump. The scheduled video stream was rumored to be a concession speech and a commitment from the Senator in working with Clinton to implement a progressive platform that has energized both millennial voters and independent voters, a voting bloc the democrats need badly to defeat Trump.

Reading his speech from a teleprompter, Sanders signaled to his supporters the anger of the Democrat party leadership and is seeking new leadership and changes in the party’s nominating process. One line from his address that might have angered the Democratic establishment base was his jabs at the leadership for its lack of transforming the party and welcoming everyone.

“Most importantly, the Democratic Party needs leadership which is prepared to open its doors and welcome into its ranks — working people and young people,” Sanders said. “That is the energy that we need to transform the Democratic Party, take on the special interests and transform our country.”

Clinton won the Washington D.C. primary, the last 2016-contested battle on Tuesday with over 78% of the votes. In total, Clinton won over 3.5 million more votes than Sanders when combining all the contested battles with 15 million votes over Sanders 12 million votes. When it comes to delegate count, Sanders has a total of 1,832 pledged delegates, along with 49 super delegates. Clinton however, has a total of 2,219 pledged delegates and 581 super delegates. 2,383 delegates are needed to clinch the Democratic nomination, but neither candidate without superdelegates has reached the threshold to do so.

Sanders has promised for weeks to continue fighting on until the Democratic convention in Philadelphia where he will challenge his rival on the convention floor with the hopes that will sway some of her superdelegates to come to his side. However, Sanders campaign has begun to winding down after losing badly in California, causing President Obama to endorse Clinton two days later. Following behind President Obama endorsement was VP Joe Biden and Massachusetts Senator Elizabeth Warren, both who publicly announced they are now supporting Clinton after remaining neutral during the primary.

Sanders’ campaign manager, Jeff Weaver announced prior to the video speech that Sanders is no longer seeking the support of superdelegates. He also announced that despite the contentious primary fight, both Sanders and Clinton are on good terms and will work together to defeat Trump in the fall.

“I think people are working together because we understand we need to defeat Donald Trump in the fall,” Weaver said. “That’s an imperative.”