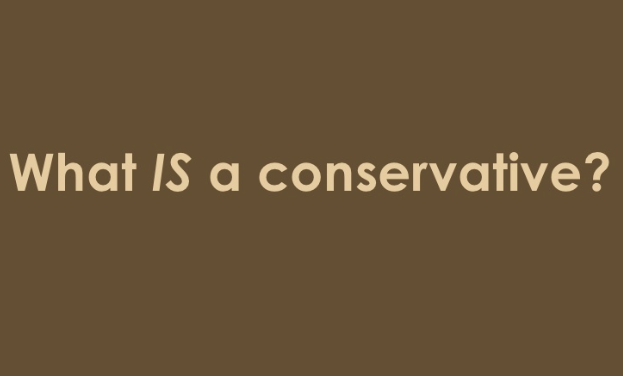 As I was browsing the internet the other day, I stumbled across a video clip from the show “Full Frontal with Samantha Bee” entitled The Religious Right. It piqued my interest because I had seen commercials for this new comedy show on TBS and I was intrigued by the topic she would be discussing. I was curious to hear what her thoughts were about conservative Christians in America. I assumed, based on the fact that this show airs on mainstream media networks, that it wouldn’t be a warm and fuzzy feel-good piece for conservatives, but I was shocked with the vitriolic and crass humor that ensued in the ten minute segment from her show. As if being offended with her disrespectful and degrading jokes about my religious beliefs wasn’t enough to make my blood boil (calling Jesus a “little white cracker,” among other offensive visuals), I was angered with her overall portrayal of the conservatives in America.

In a nutshell, her monologue details the evolution of today’s conservative from being politically disconnected to overly obnoxiously involved in recent campaigns in an effort to push their Bible-thumping viewpoints. Throughout the segment she creates an inaccurate picture of the American conservative through sweeping generalizations, offensive humor, and faulty reasoning. In defense of conservative Christians like me, I’d like to spend some time clearing up the mainstream media’s portrayal of “the religious right.”

A common misconception that the mainstream media frequently pushes to make a point against conservatives is making the assumption that we are uneducated and unaware of how the world around us functions. Very often we are portrayed as gun-toting, Bible preaching rednecks who have a very narrow mindset and are happy to be stuck in our traditions of ignorance. During her piece, Samantha Bee made the statement that “fundamentalists are terrible at science,” making a sweeping generalization that just because most conservative Christians do not believe in evolution, we are somehow also awful scientists, healthcare professionals, and teachers. Coming from a religious and conservative home, I was raised to love learning and value education. My sisters and I were all strongly encouraged to pursue a college education and to enter the healthcare field (where we all had to study science extensively, by the way).

Throughout our courses of study we grew to understand and appreciate the chemistry, biology, anatomy, and physiology behind how our bodies functioned. After obtaining my undergraduate degree I went on to obtain my master’s degree so I could continue to study the science behind neurological disorders and how to rehabilitate and treat them from a clinical perspective, and guess what? I wasn’t terrible at it! In fact, I use my knowledge of science every day to diagnosis, evaluate and treat the patients I am presented with. Conservatives are not stupid, ignorant, or uneducated. It is time for us to stand up against the mainstream media’s inaccurate portrayal of us by defending our intellect, education, and contribution to society.

My value is not solely in the home environment.

At one point during her segment, Samantha Bee made a jab at conservative women by portraying us as weak, too focused on the family, and uninvolved in areas of life outside of the home. As a woman, I was highly offended by her portrayal of the conservative woman. While I do value my marriage and when I have children, I will value my responsibility as a mother, I am constantly making an effort to be involved in areas outside of the sphere of my home. I view it as my right and responsibility to be knowledgeable about local, national and worldwide events and issues, and to allow that knowledge to spur me to action.

Because of my love for my husband and future children, I want to do everything I can to extend my influence in my community to promote the values that I cherish. Conservative women have proven themselves to be some of the strongest forces in fighting the evils and injustices that we face in this present world. To portray us as weak, skittish, and fearful is giving the world the wrong impression of us. I know the mainstream media gets more laughs out of portraying us as frazzled, pregnant weaklings, but the truth is that we are strong and capable women who are willing to fight tooth and nail to preserve conservative values in America.

I am not a bigot.

Another punch that was thrown at conservatives during her “comedic” monologue was that we are bigoted and hateful towards people who do not line up with our conservative values. It seems that this is the area where I most frequently have to defend myself due to the nature of recent events involving the legalization of gay marriage and the most recent uproar about transgender bathroom laws. As a conservative Christian, I look to the example of Christ in my dealings with people who don’t share the same lifestyle that I do and I hope that people who know me and discuss these issues with me see that my goal is to treat every individual with the respect and kindness that I hope would be shown to me in return.

In defense of conservative values however, I do also hold to the old saying that goes “your rights end where mine begin.” In my field of practice, if I was ever faced with a transgender client who was requesting vocal therapy while undergoing a sex change, I would respectfully and kindly refer him to another qualified vocal professional. This person has absolutely every right to pursue a gender that he identifies with, but I also have absolutely every right to not violate my conscience by providing services for a lifestyle that goes against my morals.

This does not make me a bigot or a homophobe, this makes me an American citizen exercising my rights in the same way a transgender client would exercise his. This is what makes America such an amazing country! Unfortunately, the mainstream media is hypocritical and unfair as it portrays conservatives as hateful and bigoted. When a lesbian couple demands a cake from a conservative baker, the lesbian couple is applauded for exercising their rights, while the conservative business owner is punished for exercising his.

The mainstream media is not on conservatives’ side. It is constantly pushing to degrade, humiliate, and undermine Christian values. It is our responsibility to stand up, say enough is enough and not let ourselves be bullied by the powers of mainstream media anymore.

Obama's Pathway to the Borderless World