Iran has proven time and time again why they’re considered one of the top terrorist sponsored states yet no one in the Obama administration or our Congress seems to notice.  Or care. 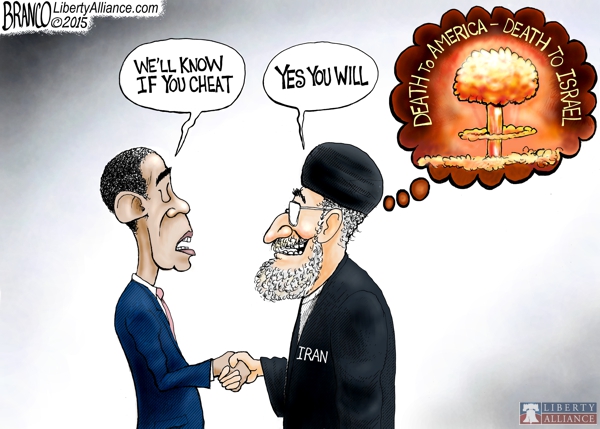 It’s not news that hundreds of U.S. soldiers’ deaths or injuries during the war in Iraq were caused by Iranian made EFPs and Iran’s Al Quds Commander Qassem Soleimani’s forces in Iraq were trained, equipped, financed and directed to kill American forces.

It is news to some however that Obama’s Nuke deal might have not been all it was cracked up to be, and it’s being reported that there were some manipulations going on behind the scenes by the Obama Administration. It seems now that questions are arising about whether White House adviser Ben Rhodes, along with Obama and others in the administration misled the press, the public, and Congress on what the Iranian Nuclear Deal actually contains and how it was ‘sold’ to the public and media. House Republicans have asked Rhodes to testify at a hearing they’ve scheduled for today.

It’s interesting that while over 70 percent of Americans who knew about the proposed deal didn’t want it, and many in the Middle East and around the world didn’t want it, somehow it still passed through our esteemed Halls of Congress last year. Obama looked like he was getting a breakthrough deal with Iran which would be the piece de resistance for his Presidential Legacy.

According to an interview and article by the New York Times, Ben Rhodes is the “single most influential voice shaping American foreign policy” aside from Obama.  The article has come to the attention of Congress because it describes Rhodes involvement of what is called “the successful Iran-deal messaging campaign.”

This is the same Ben Rhodes who orchestrated changes of the CIA talking points when news of Benghazi first hit the White House.  And the same Rhodes who had to spin the Iranian seizure of American Sailors when they captured two Navy patrol boats this past January because news broke just hours before Obama was due to give his STOTU Speech. Shortly after, Secretary of State John Kerry thanked the regime for its cooperation in eventually releasing the sailors, calling the action a diplomatic success.

The Times piece gives details into Rhode’s work as the deputy national security adviser for strategic communications, in which he writes Obama’s speeches, plans his foreign trips and runs communications strategy throughout the White House.

Rhodes seemingly brags about his work on presenting the Iranian Nuke Deal, claiming he and others in the administration created an “Echo chamber” where they had picked groups to “Carry the message effectively”. Or in other words, control the narrative making media and others believe that this was a good deal and much of any negativity was partisan politics from war hawks and Republicans.

While other media outlets are now coming out with this story, congress is also taking a closer look at how they may have been hoodwinked into supporting this deal. But therein lies the rub.  It’s not news, and they should have known.

Either our elected officials find out about policy by what’s tweeted or fed on the mainstream news every day, or they just don’t care to make waves and appear to be the “party of no”.  Or worse, our so called leaders knew that any deal with Iran would surely be dangerous and potentially deadly for many around the world, and yet only appeared to object in order to appease their nervous constituents.

Paul Ryan and others have come out in recent days acting all betrayed, objecting, and promising to get to the bottom of things, and threatening hearings and to make sure nothing bad happens.  Well, I have something to say to you Speaker Ryan…

Sure, because you’re the government and you wouldn’t lie to us. You’re serious about blocking Iran’s mullahs and this administration from having the ability to hand over any more money to a terrorist regime you allowed Obama to make a deal with.

We all heard the spin from the White House, so now its Congresses turn.

You’ll excuse me if I don’t believe anything will come from you or anyone else from DC, as some of us wrote before the deal was sealed that it would be disastrous for both the US and Israel.  We’ve been writing about the Administration’s willful negligence since 2013 and before. You were even told by Iraq War Veterans who had survived yet horribly injured by Iranian built EFPs that this would be a disaster, but you preferred to listen to the spin by Rhodes and others who claimed that those who didn’t support the Nuke deal preferred “a bloody and costly war like the conflict in Iraq.”

Tell that to our troops. Tell that to Israel, since the Iranian regime continues to provide financial and military aid to Palestinian terrorist groups such as Hamas and proxy terrorists Hezbollah and Islamic Jihad, and has revamped its role in the Israeli-Palestinian conflict.

It doesn’t take a rocket scientist or even Americans who fought and were forever changed by bombs to know that make a deal with a terrorist nation such as Iran is insane.  But apparently it takes a fiction writer turned foreign expert to sway our politicians to believe it’s a good thing.