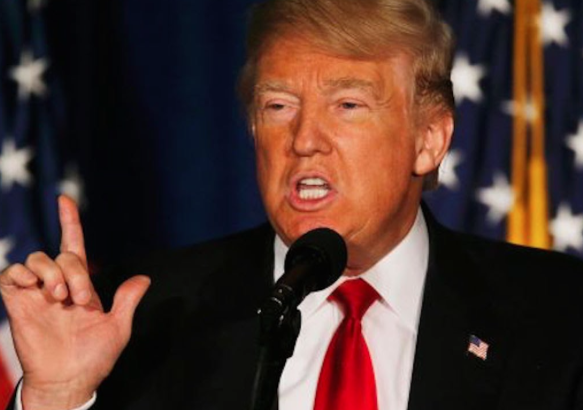 Last week, Donald Trump had his first “presidential” appearance when he gave his “foreign policy speech.” He has been attacked for being ambivalent, yet conforming to the Cold War standard of U.S. world hegemony. The criticism of his speech both in the United States as well as abroad has been prompt and sweeping.

“I can only hope that the election campaign in the USA does not lack the perception of reality,” Frank-Walter Steinmeier said. “The world’s security architecture has changed,” Germany’s Secretary of State continued. “It is no longer based on two pillars alone. It cannot be conducted unilaterally. No American president can get round this change in the international security architecture… ‘America first’ is actually no answer to that.”

Interestingly, Germany itself has taken the “right turn” as left-wing demonstrators are being suppressed and the conservative AfD is gaining momentum. “Germany First” is in the hearts of the German people, but what can they do – the burden of history weighs heavy on their shoulders, and Mrs. Merkel knows it.

Carl Bildt, a former Swedish prime minister and foreign minister who served as UN envoy to the Balkans in the aftermath of the Yugoslav wars of the 1990s, said he heard that Trump was “abandoning both democratic allies and democratic values.”

However, Sweden itself is now paying the price, realizing that “democratic” does not mean “socialist” and in all respects “internationalist.” Sweden is offering $1,500 to any and every Muslim immigrant who is willing to voluntarily leave the country. A new series of violent armed Muslim riots have occurred last week in Sweden. Rapes continue. Muslims poison Swedish dogs with “laced sausages,” vandalize Christmas trees (they call it “celebrating Christmas”) and only two days ago, when Christians entered a Muslim refugee area with charitable and peaceful purposes, they were tied up, dressed in white robes, paraded in public, ordered to kneel down and… You can find pictures of this and other atrocities on the internet. This is happening in Sweden NOW!

Yet, they are criticizing Trump, whose key policies focus on domestic safety and prosperity.. Newspapers and internet media are teeming with headlines such as (the) “First Isolationist Candidate” who is “withdrawing support from our friends…” Let us look into what Trump really said and how much truth there is in this mass media phobia and pro-socialist pandering.

Trump made several good points in his speech. First, he criticized Obama’s conciliatory gestures and empty rhetoric, especially with respect to his lack of support for the uprising against Mubarak in Egypt in 2011 and his vacuous threat of a “red line” against Assad. He also attacked the “nuclear deal” with Iran, a major thorn in the eye to Israel as well as Turkey and Saudi Arabia.

Second, Trump promised “a disciplined, deliberate and consistent foreign policy,” as opposed to the “reckless, rudderless and aimless” policies of Obama and former Secretary of State Hillary Clinton. One of the key points, which somehow escaped (perhaps deliberately?) the attention of the German and Swedish ministers, was Trump’s reassertion of our nuclear defense system over Europe, which was dismantled by Obama in 2009, even as Iran had already had the capacity to reach Warsaw and Prague and Budapest with their nuclear-loaded intercontinental missiles. Trump’s speech proposed that the systems over Poland and the Czech Republic (once much acclaimed and praised by the locals – to which I am a personal witness) be reinstalled and expanded.

Next, Donald Trump proposed that NATO allies should spend at least 2 percent of their respective GDPs on defense. Tacitly, Obama has taken up this suggestion and made it an official point of his pro-NATO policies. This “rhetoric” raised alarm among all countries that still rely on the United States for defense – including South Korea and Japan. What happened? They are reluctant to contribute to the defense of their own countries?!

Former South Korean Vice Foreign Minister Kim Sung-han, who now teaches at the Korea University in Seoul, said Trump would be “the first isolationist to be U.S. presidential candidate, while in the post-war era all the U.S. presidents have been to varying degrees internationalists.”

Obviously, all these politicians have their countries’ interests in mind. Donald Trump has ours. As to the “post-war era,” from Marshall Plan to Yugoslavia to Iran, we have always attempted to help our friends, no matter what the price! However, let us examine the veracity of these “various degrees of internationalism” with respect to our entire history.

It was George Washington who had cautioned us against “entangling alliances,” a phrase hallowed by Thomas Jefferson in his Inaugural address. Monroe Doctrine, which told Europe “hands off, America is ours,” is a flip coin of the same mint. When Tsar Alexander II put down the Polish uprising in 1863, French Emperor Napoleon III asked the United States to “join in a protest to the Tsar.” Secretary of State William H. Seward responded that our foreign policy was that of “non-intervention…forbearing at all times, and in every way, from foreign alliances, intervention, and interference.”

Panama, Nicaragua and the Middle East were not included in the Monroe Doctrine, but Roosevelt in his famous Corollary of 1904 made it clear to Europe that the U.S. “Big Stick Policy” would enforce European claims outside Europe, perhaps everywhere but the Middle East. This Mahan-Machiavelli declaration was gnawing on Woodrow Wilson’s progressivist conscience, but even he had been famously carried on into his second term on the echoes of the motto “He kept US out of war!” Then the Germans sank Lusitania…

Nonetheless, a real turn from our fundamental native (and, by the same token, perhaps “nativist”) policy of isolationism did not come until Pearl Harbor. Lusitania, Pearl Harbor, Bay of Pigs, 9/11… no-one will be isolationist when attacked on their native soil. As Christians, we have one more cheek, but we are no cowards and we will not be intimidated. I do not think anyone needs to fear American “isolationism.”

What is more, the world is more of a closer, tumultuous place today than ever in the past. It is itself unpredictable, and thus predicting a policy which will react to unpredictability cannot itself be called predictable. There are only guidelines; and, as a guideline, national security is a good policy. An insecure nation can never prosper.

The only solution to the instability of all nations lies in returning to their roots and focusing on their domestic growth and well-being. This mean global capitalism, founded on personal improvement and private property – the very opposite of global socialization and “communization” of nations. Nations refuse to be “communized.” We are all different.

When Xenia Wickett, head of the “U.S. and Americas Programme” at Britain’s Chatham House “think tank” said that Trump’s policies would “make America’s allies less secure rather than more,” this statement reflects her socialist bias – reliance on some magical wand the United States will wave to make Britain safe.

British Prime Minister David Cameron called Trump “divisive, stupid and wrong,” which reminds me of Obamaesque “police acted stupidly.” Police acted as they had to under the circumstances. So will we; and, as Machiavelli would say, may those unwilling to be our friends – fear US!