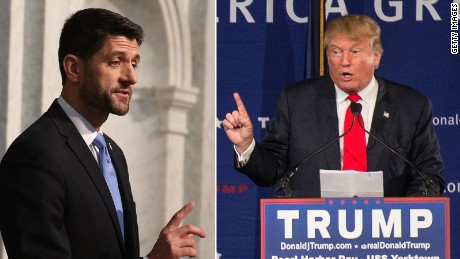 The showdown between GOP presumptive nominee Donald Trump and House Speaker Paul Ryan occurred this morning in a planned publicized sit-down that resulted in a “positive step toward unification,” but withholding to endorse.

“This is a process,” Ryan said during a press conference after the meeting, describing the need to unify Republicans. “It takes some time, you don’t put it together in 45 minutes.”

Ryan shocked the Republican base last week when he told CNN’s Jake Tapper in an interview that he wasn’t ready to back the last GOP candidate standing in the party’s nominating contest. “I’m just not ready to do that at this point. I’m not there right now,” Ryan said, adding Trump first needs to unity the party. “Saying we’re unified doesn’t in and of itself unify us. I think he has to do more to unify this party.”

Trump fired back to Ryan’s comment in a statement, stating he isn’t “ready to support Speaker Ryan” either.

“I am not ready to support Speaker Ryan’s agenda,” Trump’s statement reads. “Perhaps in the future we can work together and come to an agreement about what is best for the American people. They have been treated so badly for so long that it is about time for politicians to put them first!”

The political standoff took a half step forward when both men agreed to meet at the RNC headquarters in Washington D.C. with RNC Chairman Reince Priebus. The sit-down between the Wisconsin lawmaker and possible Commander-in-Chief was described as “planting the seed” in unifying the party.

A joint statement between both men after their talks summed up the gist of what occurred. “We had a great conversation this morning. While we were honest about our few differences, we recognize that there are also many important areas of common ground. We will be having additional discussions, but remain confident there’s a great opportunity to unify our party and win this fall, and we are totally committed to working together to achieve that goal.”

When asked about an endorsement after the first meeting, Ryan gave a skewed answer, refraining to offer an endorsement, but repeated the theme of unifying the party.

“It’s very important that we don’t fake unifying, we don’t pretend unification, that we truly and actually unify so we are full strength in the fall,” Ryan said. “I don’t want us to have a fake unification process here. I want to make sure that we really and truly understand each other.”

Ryan added: “This was our first meeting, but it was a very positive step toward unification.”

Republican National Committee Chairman Reince Priebus described the meeting on Twitter as “a very positive step” in uniting the GOP together.

The meeting was great. It was a very positive step toward party unity.

In regards to Ryan being the chairman of the Republican National Convention in July, the Speaker told reporters he will be taking on that role. On Monday, Ryan said he is willing to step down from his role as chairman of the GOP convention if Trump asked him to do.

Today, Ryan indicated that this issue is now behind them. “I am happy to serve in this capacity at the Republican convention,” Ryan said. “I would honor the decision of our presumptive nominee and he did express that preference.”

After the meeting, Trump headed to another meeting with Senate leaders at the National Republican Senatorial Committee’s headquarters, his second of third meeting the GOP presumptive nominee is scheduled to have on a busy Thursday morning.