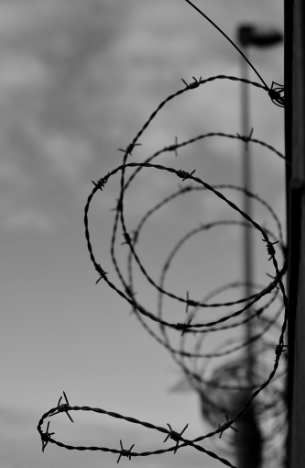 I grew up in the country surrounded by a wall. It was called the “Iron Curtain,” because it was not quite a wall. Yet, it kept us in. So today, when people say it is impossible, I draw a sigh and whisper to myself: “If they only knew…”

When I tried to escape, it was two in the morning and I thought it would be easy because I had been to that crossing before and knew it very well. There was a railroad ran through the border and a forest lay nearby. It was just a matter of getting there, getting through. What is more, I had my best friend Pete with me, which seemed to dissolve the worst of trepidation, at least for the moment.

Little did we know that “they” knew about us as soon as we entered the 5-mile border “perimeter” accessible only to locals and people who lived there and possessed a special “pass.” Taking a bus and getting off within this perimeter was the first mistake. Everything and everyone was monitored. Mind you, there was no electronic surveillance then – just people, like the locals who knew one another all too well, and the bus driver, and the soldiers patrolling bus stops.

We were lucky in that the bus was nearly empty and there was no-one at the last bus-stop, from which we could see the official border crossing point. We were determined to avoid that and go straight through the field to the Austrian woods. “It’s so easy!” we laughed as we got off the bus, literally within reach of Austria. Little did we know…

It was a flatly plowed field with elevated guard posts, similar to what foresters and game hunters have. We knew those posts were monitoring nearly a mile each way and could not see us at night. We also knew there would be several fences to scale, for which purpose Pete had his wire cutters. We had a bag of food and a bag of clothes. We were both Olympic athletes and could outrun and outjump probably every soldier in the commie army. The service was compulsory and most men “did” those one-and-a-half years drinking beer and playing cards. No incentive, initiative, discipline.

What we did not know was that border guards were patrolling with loaded machine guns and German Shepherds in pairs of two soldiers who were all selected based on their parents’ communist allegiance. They let us walk just as far as they wanted and could have shot us at will without warning at any time. We were lucky the two guys, perhaps two years older than ourselves, did not shoot us but shouted first.

Still, I will never forget staring into the muzzle of a machine gun, answering questions about what I was doing. Illegally crossing the border was a crime against the Regime and the Party. It was as bad as it gets, murder, felony of the highest order! My throat was dry, Pete was white as a sheet, stammering like Ed Carney caught red-handed in his boss’ office. Before we knew it, we were separated, strip-searched and cross-interrogated in cross-beams of 200W lamps with rough commie military voices firing from the dark questions to which I had no answers – absurd questions too, which were not questions at all, such as: “Do not lie to us, we know all about you!” and “Admit you were intentionally spying on military installations!”

When my eyes adjusted a little, they moved the lamps still closer. Although I was half-naked and it was cold in there, I felt sweat running down my forehead and my sides, everywhere.. I glimpsed two soldiers by the door with machine guns at the ready. It was a plain room in the cellar of the border barracks – whitewashed walls, dark brown wooden table, two chairs. One interrogator was behind me, one in front of me, my back was pressed against the table. In 30 minutes, I was ready to sign my name to a tightly-typed confession without being able to read a word, even had they given me a minute to peruse it, which they did not. They threw me in a stone-cold cell and let me beg for water for two hours.

In the morning, we were transported in a World War II Jeep with wooden planks for seats and two armed soldiers by each side to the KGB Headquarters in Bratislava. Further interrogation followed, then we were officially reprimand by the KGB Chief, who prided himself on being a former boxing champion. The little Napoleon of KGB was not pleased, he said, to see two members of the National and Olympic Team “disappoint the State, which had invested you with so much resources, money and trust! You know what you have done?! You betrayed the trust of the working people of this country, who have to struggle and slog away for you, the elite of the Nation to live in the lap of luxury…!”

Obviously, the man had no idea how we had lived: in a prison complex within the Prison State, fed on bread with lard and hamburgers from the worst ground beef you can imagine, swimming in fat. Yes, our dorm rooms in the complex called “Olympic Sports Institute” (referred to by all the Team Members as “the Lager” – German for concentration camp) were not much different from that interrogation room in the barracks basement. Frankly, the interrogators’ voices resembled our Comrade Head Coach’s voice during the 3-hour workouts when we fought to survive through cramps and pain twice a day… “You’ll be here till you’re sweating blood!!!” he yelled, my ears popped, and I whispered: “Yes Comrade Coach.”

You see, it was not quite a wall which kept us in, yet being “walled in” is probably the best term I can think of. Then again, there are walls and there are walls. It starts brick by brick: political correctness is one, political allegiance to an -ism is another… until one day you realize that it is the wall they made you build around your own mind. The wall of guilt, hatred, self-doubt and fear which keeps you in.