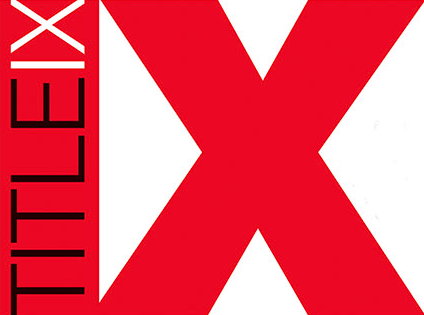 For anyone old enough to remember 1970’s cigarette ads, Virginia Slims were marketed as a “woman’s” cigarette. Their catch phrase, “You’ve come a long way baby”. No one is advocating lighting up but they were right, women have come a long way. Within one hundred years we have gained the right to vote, become CEO’s and astronauts, and unless you work at the White House or on Hillary Clinton’s campaign, you have broken through the glass ceiling of equal pay. More women are earning college degrees than ever before, and women, for lack of a better way to put it, while they are in college, just want to be one of the guys and experience everything their chosen university has to offer. That means more women are playing college sports than ever before.

Enter Title IX. First introduced in 1972, it was designed to ensure more equity when it came to women’s college sports. But it was more than just about sports and even more than just about equality for women. Title IX prohibits any discrimination, harassment or violence based on gender or gender expression. But do the guidelines of Title IX really protect men as well?

Grant Neal is a student at Colorado State University-Pueblo. Neal was a wrestler and star football player. He has a 3.96 grade point average and plans to attend medical school and become an orthopedic surgeon. Grant Neal is a guy who seems to have everything in the world going for him. And as busy a guy as he obviously is, he also has a girlfriend. Grant’s girlfriend worked as an athletic trainer for the football team.

Last October Grant and his girlfriend ended an evening with a consensual sexual encounter. Prior to things getting steamy Neal was not wearing a condom. His girlfriend said she did not want to have unprotected sex and asked him to use a condom. He willingly complied. The next day his girlfriend related the previous night’s events to a friend, as girls often do. Perhaps Grant’s girlfriend was not aware that her friend was a liberal and as a liberal equated football players with sexual assault, possibly rape. The friend promptly did her liberal chick duty and reported Grant Neal and his assumed brutish behavior to campus authorities. Neal has been suspended from school for sexual misconduct. Where does the “misconduct” occur? The few seconds, yes seconds that Neal was not using a condom. Grant Neal is now filed a federal lawsuit against the University, the Obama administration and the Department of Education for forcing colleges and universities to do what amounts to denying due process to young college men when they are accused of such acts.

So exactly how are policies like Title IX helping guys like Grant Neal? Because of one busy-body who was not a witness to the event, nor was she a participant, has managed to force a university to deny a student any hearing of his side of the story. It should be noted that Grant’s girlfriend immediately came to his defense and tried to tell anyone who would listen what really happened. The problem was, no one wanted to listen. As of this writing Grant Neal is not allowed to return to school until his girlfriend graduates.

So is this the feminism that was the ultimate goal of the feminists of the 60’s? Does the new feminism include discrimination of men, and is that somehow acceptable and OK? How does this new feminism empower women? Certainly colleges and universities should do all they can do reduce the incidence of sexual assaults and rape on their campuses, but why is it assumed that the guys are lying? Why do they not get their side of the story heard? Are many of the “campus authorities” women? Possibly. Are there many women in positions of authority on college campuses who came of age in the golden era of feminism and just assume the guys are covering up their behavior, even think that it is OK?

College and university campuses are supposed to be the arenas of free thinking, equality and expression. Does it apply if you just happen to be male?

Because male students at Colorado State University-Pueblo and other colleges around the nation who are being denied due process when incidents like this are reported, Guys like Grant Neal will no doubt have a bit of trouble getting into any other schools. As someone once said, “where does he go to get his reputation back”?

Apparently not to those who enforce Title IX.

What A Conservative Is (and Is NOT)

A New Day Has Dawned in the State of Israel