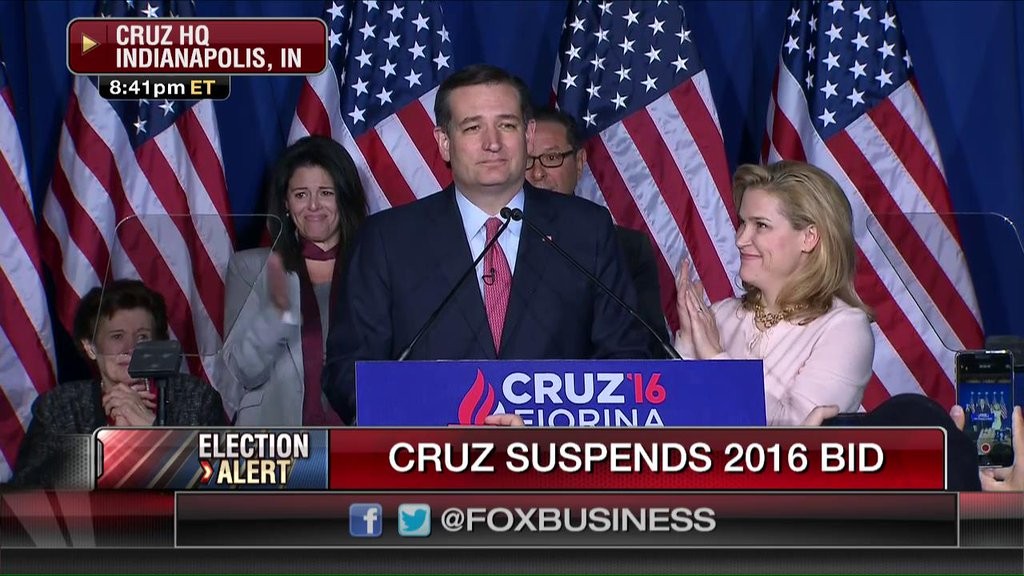 “Tonight, I’m sorry to say, it appears that path has been foreclosed,” Cruz said, as supporters began shouting emotionally “No!” “And so with a heavy heart, but with boundless optimism for the long-term future of our nation, we are suspending our campaign.”

Cruz added, “But hear me now, I am not suspending our fight for liberty.”

Reports of Cruz suspending his campaign was announced from his campaign manager Jeff Roe, who told multiple news outlets right before Cruz took to the stage.

Despite being mathematically eliminated from clinching the 1,237 threshold needed to secure the nomination, Cruz continued to fight forward all the way to Cleveland with hopes of winning the GOP nomination by means of a contest convention. However, after a series of massive defeats in the Northeast the past two weeks, Indiana was do-or-die for the Senator.

“We left it all on the field in Indiana. We gave it everything we have got,” Cruz said. “But the voters chose another path.”

Besides the series of massive losses after winning the Wisconsin primary just over a month ago, Cruz made a number of strange and unconventional moves in hopes to stop Trump. When the race turned to Indiana after the 5 Northeast states primary, Cruz and John Kasich formed an informal alliance of divide and conquer. Cruz announced he would not compete in Oregon and New Mexico in exchange for Kasich not competing in Indiana. The alliance left both campaign supporters questioning their motives as a recent NBC News/WSJ poll showed voters overwhelmingly opposed the alliance. The alliance became shaky just hours after both campaigns announced their divide and conquer plan when Kasich said his supporters should still vote for him even though he wasn’t campaigning there. The alliance quickly dissolved when Cruz stated there was no alliance leading to Kasich’s campaign to tweet out a subliminal message of “I hate liars.”

Last Wednesday, Cruz tried to get the media’s attention away from Trump’s foreign policy address by announcing his Vice Presidential pick, his former rival Carly Fiorina. The move was seen as “a sign of desperate” according to many media pundits who questioned why would Cruz, who was mathematically eliminated from becoming the nominee would pick a running mate just three months before the convention. Cruz hoped the move of picking Fiorina, who became his strongest surrogate after endorsing the Senator before the Florida primary would help him with the moderate Republicans and women voters in Indiana and especially in California. After announcing Cruz-Fiorina 2016, Fiorina campaigned alongside the Cruz, a big mistake the Cruz’s campaign would employ. The strategy that helped propel Cruz’s wins in Iowa and Wisconsin in terms of surrogates was by a divide-and-conquer approach. Top surrogates would be deployed in key suburbs areas as Cruz focused on securing evangelical conservative voters. It wasn’t until Monday that Cruz’s campaign changed back to their old approach, but it was already too late for Cruz to use Fiorina in donut counties of Indianapolis, areas that heavily went for Trump.

Another problem Cruz faced was securing influential supporters endorsement that would help shift voters to his side like in Wisconsin and Utah. Indiana Governor Mike Pence announced his support for Cruz just last Friday, giving the senator a tepid endorsement. It was a big difference of endorsement where Wisconsin Governor Scott Walker whole heartily endorsed the Senator and campaigned with him. Pence, who appeared on Indianapolis talk show, Greg Garrison show to announce his support, would began praising Trump for drawing attention to Indiana’s key issue of Carrier’s decision to shift jobs away from Indiana to Mexico. The governor who is facing a tough re-election bid this November feared alienating Trump would cost him his seat as he told voters they are free to vote for whomever they want. He also added that he will play a pivotal role in helping the GOP nominee come this fall whether it be Cruz or not. Failing to gain any other influential supporters from Indiana, Cruz was left alone campaigning aggressively throughout the Hoosier state trying to achieve the same results like he saw before in 11 states, but this time the signs didn’t show any hope of a Cruz victory.

Being the first GOP candidate to announce his candidacy that became a 17-person field over a year ago, Cruz was the tea-party favorite, who built one of the most organized campaigns that helped him eliminate other rivals with similar appeals to become the only conservative candidate remaining after winning the Iowa caucus. However, Trump would bounce back to win the rest of February contest in New Hampshire, South Carolina and Nevada. The race would head south and Cruz focused his plan on big wins to catch up to Trump new delegate lead. That plan failed, as every state in the South except Texas during mega-Super Tuesday would give the first place prize to Trump as Cruz would come second in most. The win in his home state of Texas helped keep Cruz candidacy alive and offered him a huge delegate bumped in delegates.

Tuesday’s primary concluded a five month long, bitter clash between Cruz and Trump, a race that became a two-man spectator show between the former friends that turned bitter enemies. The “bromance” between the two top rivals quickly took a downturn when Cruz unleashed attacks against Trump during a January Fox Business debate in South Carolina. Cruz’s early strategy of playing nice helped him stay away from the fray, as his rivals would try to attack Trump only to drop out right after. Once the race entered Iowa with polls having Trump in first place, Cruz executed a strategy of releasing and using Trump’s past remarks to show he was unqualified to hold the highest office in the land. One remark that would backfire on Cruz and haunt him for months to come was trying to pander to Iowa voters. Using a phase that Trump once said in 1999 in regards to supporting partial birth abortions because “those are New York values, they’re not Iowa values,” Cruz took aim to reminder Iowa of the comment. It backfired on Cruz when Trump managed to slam the Senator for questioning “New York values” by recalling 9/11 attacks and the heroism from first responders. Cruz might have won Iowa, but he didn’t foresee New York playing a pivotal role in deciding the shift of the race as his comment began haunting him months later. As the race turned to the Empire State, Cruz had a tough time shaking the narrative which led to him abandoning the state a few days before the primary as Trump captured over 60% of the votes.

The race would also turn negative with personal attacks between the two when the wives were put into the fold. During the Utah primary, Cruz Super-Pac released an ad of Melania risqué modeling photo where the former model posed naked in handcuff. The caption read, “Meet Melania, your next first lady or you could support Ted Cruz.” Trying to capture to Mormon votes, the Super Pac fueled the biggest win for Cruz to day by reminding them of the billionaire’s lavish life style, something Mormons consider sinful and unmoral. A Twitter war would erupt between the two rivals when Trump blamed Cruz’s campaign of being behind the ad. He would escalate the feud by retweeting an unflattering picture of Cruz’s wife, Heidi, and comparing it to a flattering picture of his model wife, Melania that read, “images are worth a thousand words.”

Earlier Tuesday morning, Trump rehashed a story that was recently published in the National Enquirer that suggested Cruz’s father, Rafael Cruz, was connected to President Kennedy assassin Lee Harvey Oswald based on a photo image.

When asked about Trump’s remarks, Cruz answered by unloading an angry tirade calling the front-runner a “pathological liar,” and “utterly amoral.”

“This man is a pathological liar, he doesn’t know the difference between truth and lies,” Cruz said. “He accuses everyone of lying and whatever lie he’s telling, at that minute he believes it. The man is utterly amoral.”

“Today’s ridiculous outburst only proves what I have been saying for a long time, that Ted Cruz does not have the temperament to be president of the United States,” Trump said in a statement. “Ted Cruz is a desperate candidate trying to save his failing campaign. Over the last week, I have watched Lyin’ Ted become more and more unhinged as he is unable to react under the pressure and stress of losing, in all cases by landslides, the last six primary elections — in fact, coming in last place in all but one of them.”

Cruz’s exit leaves John Kasich the only remaining candidate in the race against Trump. Kasich campaign released a memo shortly after Cruz bowed out vowing to stay in the race “unless a candidate reaches 1,237 bound delegates before the Convention.”

Why Donald Trump Scares Me