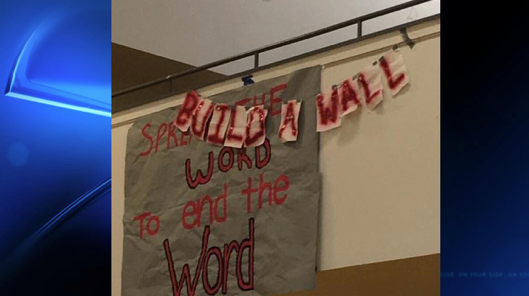 A student at Forest Grove High School, a public school in the Portland, Oregon area, is now apologizing for a sign they hung stating “Build a Wall.”

Sadly, in an ironic turn, the student says that the sign was hung in protest to bring attention to the problem of squelching freedom of speech.

In a letter the student’s parent’s friend released Thursday, the student expresses regret.

“I am truly sorry for anyone that I have hurt. Because my words did hurt – I understand that now. I will think more carefully in the future about my words and my actions. I still passionately believe in freedom of speech, but I also understand that just because it’s legal to do something doesn’t mean that it’s the right thing to do,” the letter reads.

The sign sparked walk-outs from students protesting the sign and its message at Forest Grove HS and many neighboring schools.

All this incident has proven is that the right to freedom of speech is now always going to be obliterated by others’ “right” to not be offended.

Students these days are actively being taught to advocate for social issues. They are stomping the American flag. They are precious and delicate flowers who can’t be offended.

When I was in HS if we had a problem we went to the principal or counselors and it was taken care of. WITHOUT gaining notoriety. We didn’t want attention, we wanted the problem to go away.

We weren’t trying to get attention. We weren’t throwing around lawsuits or walking out of school because someone wrote 3 harmless word in red and hung the sign where all could see. Build a Wall. That’s all it said.

When is the last time hundreds of students walked out because sex-ed is informed by Planned Parenthood in many school districts? Protested for the lives of unborn human beings? Never. And that is surely a heck of a lot more important than 3 little words.

We don’t need a physical wall. We need the students to stop walling freedom of speech in. Freedom of speech is important. I don’t care if it hurts your feelings or my feelings. Nobody said we would go through life without being offended.

And by the way, who supplied them with the bullhorns so quickly? Apparently the district who wants to suppress one person’s rights to freedom of speech so another can prevail.

Suck it up, buttercup. Delicate flowers don’t do well in the real world.

Conservatives in Exile and the Silencing of America’s Conscience

History is Changed by The Few