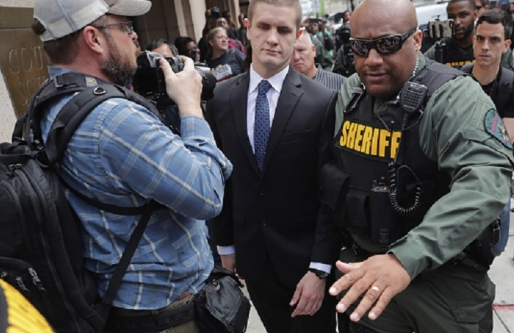 Strategically avoiding Preakness weekend, Baltimore City braced for what may have been another disastrous scene. Shouts rang out as Officer Edward Nero was declared not guilty on all four counts Monday. Charges included, second-degree assault, reckless endangerment, and two counts of misconduct in office. Waiving his right to a trial by jury, Officer Nero put his fate in the hands of Judge Barry Williams.

Protestors stood outside the courthouse voicing their opinion about the acquittal, along with their disappointment in the justice system. However, Freddie Gray’s attorney, Billy Murphy, commended the judge for being fair and impartial. Why such a difference of opinion on the same side of the fence? I believe it’s ignorance. Murphy is an attorney, he understands the law, whereas the majority of the protestors fail to understand the severity of the charges brought forth without sufficient evidence.

It is time Baltimore City residents truly see this case for what it was, a personal agenda. State’s Attorney Marilyn Mosby promised “our time is now” when first announcing all 6 police officers involved would be indicted in the name of Freddie Gray. Though Mosby was oddly absent during the verdict, the judge went on to explain not only did the prosecution fail to prove each count beyond a reasonable doubt, he weirdly had no proof that any laws were broken by the officer at all. Mosby wasn’t just pretending to be “Activist of the Year” in 2015, she wanted to be famous.

Once overcharging all 6 police officers, Marilyn Mosby had a heavily photo shopped profile in Vogue magazine, attended high profile social events with many photo ops, and used the “Our time is now” mantra to promote her hubby during the Baltimore City democratic mayoral primary. She certainly has come a long way since her cameo on the television show ‘Judge Judy’ back in 2000. Though, she actually won that case.

If Mosby isn’t slapped with a malicious prosecution lawsuit once this is all over, I would be shocked. Actually, no I wouldn’t…this is Baltimore.

Daniel Greenfield: No Room for Women in Muslim Paradise