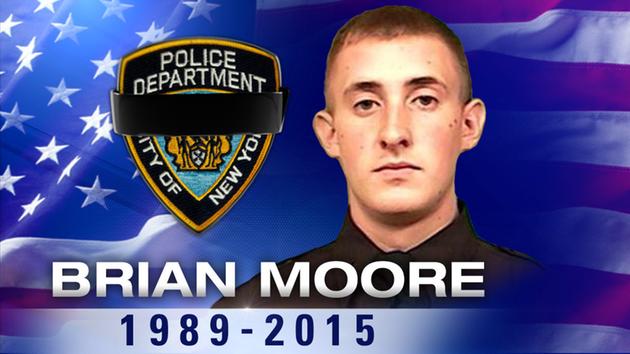 One year ago today, on a warm heartbreaking spring afternoon, a sea of blue along with hundreds of mourners gathered to pay their final respect to a young hero – Detective Brian Moore, who was killed in the line of duty.

I remember this tragic week like it happened yesterday. I was with my family watching the 141st running of the Kentucky Derby. I remember American Pharoah winning the derby; his first led of the Triple Crown. Moments after the win, I received a text from a good friend, an NYPD officer telling me a cop working in Queens was just shot in the head and his condition was unknown. It was also the very same night everyone was gathering together to watch “The Fight of the Century” boxing match between Floyd Mayweather Jr. vs. Manny Pacquiao.

That night as people were heading to their destination to watch the fight with friends, I was also doing the same and meeting my group of my friends. All I can remember was texting my cop friend nonstop, asking her for the status of the cop who was shot. I also reached out to a few other cop friends, asking for status as well only to get mix responses. Some texted that the cop passed away while others texted the cop was alive and in surgery.

The officer, Brian Moore, underwent immediate surgery at a nearby hospital and doctors wouldn’t know his prognosis until another day or two, according to Police Commissioner Bill Bratton who provided details of the account. The impromptu news conference outside the hospital took place just about an hour or so before the main fight was scheduled to begin.

As my friends were watching the non-relevant boxing matches (mostly just talking), I proceed to step away from the room, taking one of my friend’s phone with me. Using her phone to watch the news conference, I began to use my phone to live tweet and text my cop friend the updates the police commissioner was stating. Bratton described to reporters the turn of events, from the moment Moore pulled up next to the suspect asking if he had something in his waistband. The criminal would then suddenly pull out a weapon and fired multiple shots, striking Moore twice, in the head and face.

Two days later, Moore passed away, leaving the city to prepare for its third cop funeral in five short months.

This incident was the fifth shooting of an NYPD officer (two Bronx cops were shot in the beginning of the year, but survived) during a five-month time span. In December 2014, just days before Christmas, two NYPD officers’ — Rafael Ramos and Wenjian Liu were shot execution style while sitting in their patrol car. Five officers shot — three killed, all within five months and all of this happening under Mayor Bill de Blasio tenure, a mayor who helped fuel the anti-cop hysteria.

In case you forgot, Mayor de Blasio’s first year was defined with tensions he caused by “throwing the NYPD under the bus.” During an impassioned speech, shortly after the grand jury declined to indict the officer for the death of an unarmed black man Eric Garner in Staten Island, de Blasio stated how he would warn his son about the dangers of dealing with the NYPD. Paving the path for anti-police demonstrators to run wild, protestors day in and day out would take over the city with their countless “protests” calling for “dead cops.”

And what did Mayor de Blasio do as mayor to stop the madness, even after two NYPD lieutenants were assaulted? Nothing. He turned his back on the police, during a critical time they needed his support, but went to great lengths to praise the protestors as “peaceful.” The “nincompoop” would make matters worse by describing the attacks on the two NYPD lieutenants as “an incident, in which a small group of protesters allegedly assaulted some members of the NYPD.”

They say words have consequences and the unfortunate words utter by protestors of wanting “dead cops” would become a reality a week later. Just days before Christmas, Officer Liu and Ramos were assassinated in broad daylight from a crazed mental killer who took the chant as a calling job. Angry with the mayor for fostering a climate of resentment, turning them into targets, police officers would now turn their backs on de Blasio as he walked through the hospital corridor to visit the two slain officers’ families and twice more during both officers’ funerals.

Since then, the mayor has sought to try to undo some of this damage by praising Officer Moore, stating the young cop is “someone we should all emulate.” And as Officer Moore was laid to rest one year ago today, de Blasio continued on to praise all men and women in blue for making the ultimate sacrifice of putting their lives out on the line every day to keep New Yorkers safe. 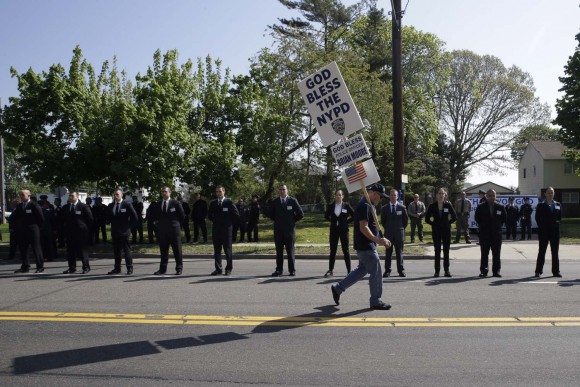 De Blasio, along with other liberal progressive ringleaders only change their rhetoric of attacking law enforcements, during times when the entire city grieves over a cop murder. Then suddenly, they join forces with the grieving city and offer nothing but praises for the dead hero. The dramatic turnaround would actually be more meaningful if they would show cops some support for the dangerous work they do daily, not when one is killed.

Last Wednesday marked the one-year anniversary of the fatal shooting. At a memorial service held on the street where the scene of the shooting took place a year ago in Queens, over hundreds of police officers and dozens of family and friends gathered to honor the young hero for his bravery.

“I talked about how he had the gift, the gift of the eye as we call it,” Police Commissioner Bill Bratton said during the memorial. “The eye when he’s on the street to go instinctively towards harm’s way, toward the danger because he had that gift. Today we celebrate that bravery, we celebrate a great police officer, a great detective.”

Bratton thanks all those who gathered during the cold raining day to remember the young hero.

“The men and women of the department standing in the rain and the cold fulfilling the promise that we always make to the families of our fallen heroes that we will never forget,” he said. “And here we are once again with the Moore family a year to the day from the tragedy. We always hope it will not happen, but it happens much too frequently.”

Both Moore’s parents, retired NYPD Sgt. Raymond Moore and Irene Moore asked everyone to keep their son’s memory alive and to remember the good times they had with the fallen hero.

“There really are no words as we all know, the loss is beyond a tragedy, is something that is felt by all of us every single day and I know that Brian made the ultimate sacrifice, giving his life by doing his job and we will continue to do whatever we need to do to remember him, and to honor him and to cherish all of his memories,” Irene said. “Let’s all just take a moment and remember one of those good memories we have of him, and in that way we will keep him alive in our hearts.”

Moore’s father shared his grief of losing his only son, but asked everyone to remember him for his courage and bravery.

“Each day without him has been really tough, especially today,” Moore’s father said. “It was one year ago that we had to say our final goodbyes to him. He was someone who gave so much and never asked for anything in return. With this turnout today, in this terrible weather, I know Brian would be very proud of his coworkers and the community that he protected so diligently. Let’s all try to aspire to be more like Brian and be the courageous hero that he was.”

Detective Moore was a five-year NYPD veteran from Long Island. During his five years on the force, Moore made 159 arrests and received medals for Excellent Police Duty and Meritorious Police Duty. Commissioner Bratton posthumously promoted Officer Moore to first grade detective at his funeral.

Moore will also be honored alongside 18 other fallen officers at the annual NYPD Memorial Day ceremony where the names of the fallen will be added to the memorial wall in the NYPD’s Hall of Heroes. Next week, Commissioner Bratton will be traveling to Washington D.C. for the National Law Enforcement Officers Memorial stated during the memorial that Moore’s name would be enshrined at the nation’s monument.

“Every time a law enforcement officer is killed in the line of duty, every cop in America feels it personally. In fact, a little bit of each of us dies with them.” — Milwaukee County Sheriff David Clarke Jr

Mother's Day: When Love is not Enough