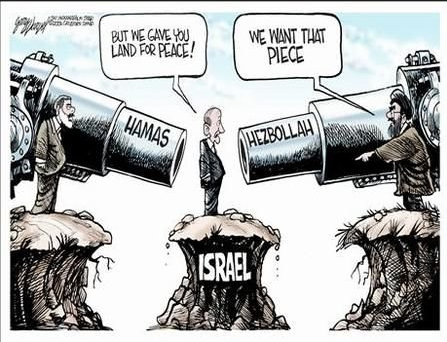 Media has portrayed Israel to be this evil empire of the Middle East. The world thinks that Israel is out to murder in cold blood and with hate the Arabs that live here including women and children. It has occurred to me the problem is that majority of liberals, including Israeli liberals do not understand the Israeli and Arab conflict which has been going on for centuries.

People are also under the influence that Arabs that live in Gaza or settlements in what people normally call Judea and Samaria the West Bank have no rights and are treated as second class citizens. This is also not the case.   We as the only democracy in the Middle East need to do a better job in the media war that has been declared on us.

First thing is first should be educating the people who the enemy is. There are radical Islamic factions that occupy Gaza and settlements. We have Hamas in the south in Gaza and Hezbollah up north.  And in the middle is Fatah, which is headed by Palestinian Authority Mahmoud Abbas. The reason the world views us as the bad guys is because Hamas and others are experts in the propaganda war against Israel.  They know how to manipulate the media with fake “Pallywood” photos and videos showing Israel being an oppressor–and that is not true.

Leaders like Mamoud Abbas and Khaled Mashael, leader of Hamas, incite terrorism. They speak at the United Nations telling lies. They use cartoons and teach them to children to start the brainwashing children at an early age starting the hate of the Jewish people and Israel.

Throughout the world, there is a huge difference in freedom of speech and hate speech. Israel does what it can to protect all of its citizens, including Arabs. Israel, during the 2014 war with Hamas, sent leaflets and made calls to Gazan civilians to help them escape the war. Unfortunately Hamas has thwarted the rescue attempts by using their own people as human shields.

Hamas are the ones that continue to send rockets into Israel. Israel only responds when it is attacked and history shows it. History also shows how much Israel has given up for peace which is never talked about in the media. Israel has done everything it can for peace between our people and we need to do a better job to get the message out to the world that Israel is truly a light to the nations.

The statements of Israel being apartheid are also false. As an Israeli citizen, I see for myself the peaceful interactions between Jews and Arabs, riding the same buses, going to the same places to eat. Arabs work with Jews in the same places. I once worked at a kosher meat factory; my boss was an Arab.

I can’t stress enough the amount of pressure PM Netanyahu faces daily, being the leader of the only Jewish country in the entire world with all eyes on him with every move he makes. What else do you expect a leader to do when rockets come into his country sit back and watch?   Remember these names:  Hamas, Fatah and Hezbollah.  These are the enemies we are at war with in the war against terror–not civilian Arabs.