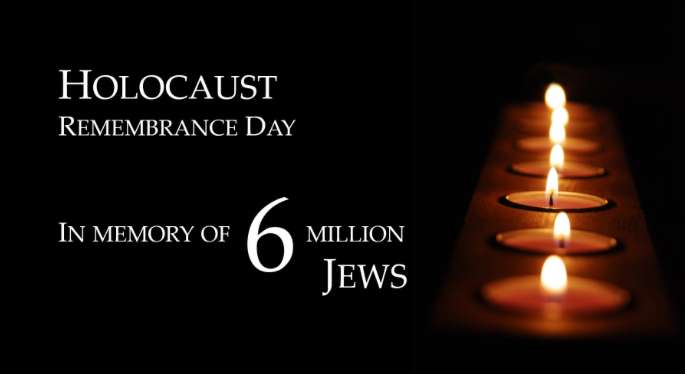 On Wednesday, May 4th at sundown, the people of Israel celebrate the holiday Yom Hoshoah Ve-Hagevurah which literally means the “Day of Remembrance of the holocaust and the heroism”.   It marks the anniversary of the Warsaw Ghetto uprising.

Traditionally since the 1960’s you hear the sound of a siren on Yom Hashoah at 11:00 a.m. Traffic everywhere in Israel will halt and people will stand in silence to pay respects. Radios or televisions will be playing something that connects with Jewish people during world war 2, including personal interviews with holocaust survivors. No public Entertainment as theaters, cinemas pubs and other venues on Yom Hoshoah.

Quotes “Never Forget” and “Never Again” are quotes that were inspired to remind people of the Holocaust and what happened there. History is there not just for people to get a diploma but to help us not to make the same mistake.   Sadly history continues to have repeated itself.

There is a new evil in our midst Radical Islam the new Nazis. Who have murdered over hundreds of thousands of Christians, Armenians, and Israelis. North Korea is also known for its own concentration camps and its genocide of its people.

Never Forget and Never Again is supposed to have meaning, to never let genocide happen again. You can only achieve so much with air strikes and sending a small amount of troops.   The United Nations a long with the rest of the world condemns the one country that truly tries to prevent genocide of its own people Israel but does nothing about genocide. But we have the training and tools to really make a difference.   Sometimes it’s the right thing to do is to put politics aside to help people.

What can we do to help combat genocide?   Continue to teach about the holocaust as well as informing people about what is happening now. We can’t keep people in the dark to continue to let the same mistake to happen not once, not twice but multiple times. It is time to truly make “Never Again” a reality.

President Obama: They Just Aren’t That Into You.

What Do You See As The Most Important Fronts In The Culture War?