Concurrent with the Inspector General’s report on Hillary’s email, I posted some thoughts on Facebook. I noted that there were some very nice responses, however, there were replies that had me scratching my head. I might have dug a hole in my scalp.

The responses that were puzzling and went as follows: “She did nothing wrong,” to “Others have done the same things,” and this one won the ‘palm against your forehead award’ claiming “There wasn’t a single bad result.” That last statement is tantamount to a not guilty verdict for a bank robber because he didn’t get away with the money!

Even after the release of the IG report, Hillary is still saying she did nothing wrong, and had prior approval. Additionally, the Hillary supporters state ‘that she did nothing worse than what General Patraeus did.’ On the first count, Hillary is continuing her lies, and on the Patreaus matter, what Hillary has done is very different than what the General did. 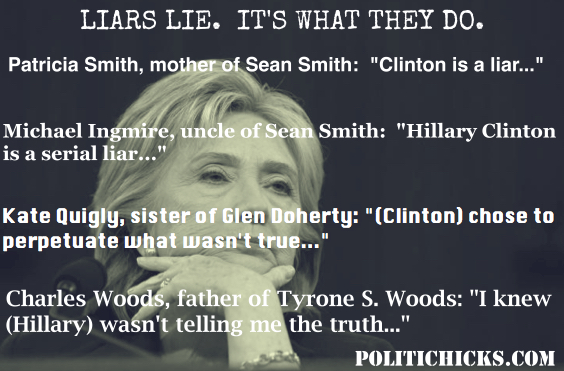 The question becomes, “what did Hillary do?” In 2009 Clinton purchased a private email server to be installed in her home in New York. On this server she used the email address [email protected]. She used this email account for official State Department business, and did not always use the State Department state.gov email account. And this is where Hillary supporters, who claim she did nothing worse than Patreaus, are patently wrong! The General did not have a private server from which he conducted official government business. Also, when Hillary continues to state she had ‘prior approval,’ she in fact signed a statement acknowledging the proper use of government property; her lies continue.

In the summer of 2014, the Congressional committee investigating the Benghazi attacks asked the State Department for all of Hillary Clinton’s Benghazi-related emails during her tenure as Secretary of State. After meeting with her, Clinton turned over about 30,000 emails. However, Clinton deleted over 31,000 emails she considered personal, and not work related. Then the ‘topping on the cake’ was revealed in 2015 when it was revealed to the public that Hillary had a private server. In August of 2015, the FBI officially launched a criminal investigation into her use of a private email server, and other related issues. Yet the ardent Hillary supporters and ideologues still maintained she did nothing wrong. So, let’s examine that point.

Let’s begin with the Federal Records Act, which states: “The head of each Federal agency shall make and preserve records containing adequate and proper documentation…of the agency and designed to furnish the information necessary to protect the legal and financial rights of the Government…” (44 U.S. Code para 3101). It should be made clear that once she used her Blackberry to send and receive emails, that too became property of the Government. Hillary stated that she used her Blackberry for convenience. Really?

However, let us not stop at U.S. Code 44. Let’s see what 18 U.S. Code, paragraph 1519 states. That codes says, “Whoever knowlngly alters, destroys, mutilates, conceals, cover up, falsifies…with the intent to impede, obstruct…any matter within…any department or agency of the United States…shall be fined under this title, imprisoned not more than 20 years, or both.” I would say that reads a bit chilling, particularly when thousands of emails were in fact, classified, and over 20 emails were so top secret that the IG has to obtain a higher Security Clearance to read those emails.

But as long as I am on topic, let’s not stop at paragraph 1519 of U.S. Code 18. Here is what paragraph 1924 states, “ Whoever, being an officer, employee, contractor, or consultant of the United States…becomes possessed of documents or materials containing classified information of the United States, knowingly removes such documents …without authority…shall be fined under this title or imprisoned for not more than one year, or both.

So I ask again, “How Much Guilt is Guilty?” Hillary may even come to the conclusion that at worst, she didn’t follow Government policies. However, why were those policies put in place? Answer: So people would not break the law!

I am not a lawyer, but I can read English, and from where I sit, Hillary has:

But wait, there’s more! It’s very probable that contained within the FBI’s investigation into Hillary’s emails is leakage to the Clinton Foundation. We know that as Secretary of State, Hillary was one of a handful of people who were responsible for approving a circuitous deal with a Canadian businessman to sell his uranium company to Russia. Within that company were some U.S. uranium reserves. What sparks interest and quid pro quos is the fact that the businessman had donated over $2,000,000 to the Clinton Foundation.

James Comey, the FBI director is in a tough spot. At best, Hillary might get a reprimand, or perhaps one of her subordinates will fall ‘on the sword.’ Ratcheting up from there, the FBI might recommend to the Department of Justice a simple misdemeanor, or at worst for her, a felony.

In the end, if Hillary Clinton is charged with anything, the question becomes, “Will the DOJ prosecute?” That issue becomes ‘iffy,’ and the political ramifications are, as Trump would say, HUGE. From where I sit, I can see guilt 50 miles away.

Memorial Day: A Season for Flags by Dr. Bill Simpson