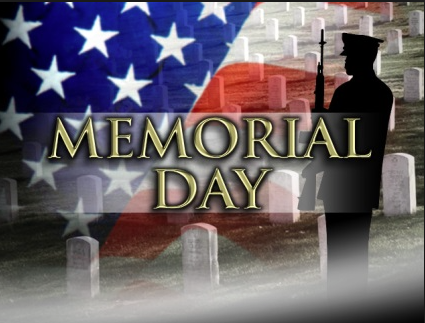 John Winthrop, a Pilgrim and advocate for freedom, once wrote about the “shining city on a hill” when describing what he imagined about America. President Ronald Reagan used that quote in his Farewell Address. Reagan regularly referred to America as a special place with a special promise. He was right.

America’s Constitution was created upon the timeless principles of freedom, life, liberty, and unalienable rights. Those who fought for these principles did so at great risk and with a devout love for their country. As the Bible states in John 15:13, “Greater love hath no man than this, that a man lay down his life for his friends.” Thousands of men and women have laid down their lives for the cause of America and the protection of it.

That “shining city” reflects the courage and sacrifice of these men and women.

Memorial Day first began as “Decoration Day” in 1868. At the time, James Garfield, who served in the Union Army during the Civil War, commemorated the first Decoration Day: ” I am oppressed with a sense of the impropriety of uttering words on this occasion. If silence is ever golden, it must be here beside the graves of fifteen thousand men, whose lives were more significant than speech, and whose death was a poem, the music of which can never be sung. With words we make promises, plight faith, praise virtue. Promises may not be kept; plighted faith may be broken; and vaunted virtue be only the cunning mask of vice. We do not know one promise these men made, one pledge they gave, one word they spoke; but we do know they summed up and perfected, by one supreme act, the highest virtues of men and citizens. For love of country they accepted death, and thus resolved all doubts, and made immortal their patriotism and their virtue.”

“For love of country they accepted death”. Think about those words. Because of great men (and women) who died, America has been a beacon in the timeline of history where natural rights, freedom, life and liberty are all protected.

However, in today’s America, our principles seem to be unraveling. Do we even love our country anymore? We are a divided nation. Some believe the principles of our founding are outdated. Others are simply ignorant. Collectively, we are uneducated about our Constitutional roots and the meaning of our history.

As Reagan also noted in his Farewell Address in 1988: “…. are we doing a good enough job teaching our children what America is and what she represents in the long history of the world? ….[We] grew up in a different America. We were taught, very directly, what it means to be an American. And we absorbed, almost in the air, a love of country and an appreciation of its institutions. …But now…some things have changed. Younger parents aren’t sure that an…appreciation of America is the right thing to teach modern children. And …for those who create the popular culture, well-grounded patriotism is no longer the style. We’ve got to do a better job of getting across that America is freedom — freedom of speech, freedom of religion, freedom of enterprise. And freedom is special and rare. It’s fragile; it needs protection.”

Reagan was prescient in his words. While many continue to die protecting this nation, we have not properly taught our children the values, principles, and traditions of America.   Hollywood despises those principles.   The “progressives” in both parties want God, freedom, individualism and borders eradicated. Our leaders who wish to “change” America and suppress freedom take full advantage of our Constitutional and historical ignorance as a nation.

America has grown complacent about its traditions of freedom, God, family and truth. The men and women who have died promising to “defend the Constitution of the United States against all enemies, foreign and domestic” were not complacent. They believed in freedom and God-given rights so much that they DIED to preserve them.

They didn’t die so that our government can redefine marriage, biology, families, and humanity and use the force of law to attack our conscience and religious freedom.

They didn’t die to save Europe only to see the cowardly ignore the dangers of radical Islam in Europe and America by embracing corrupt and misguided refugee policies.

They didn’t die for open borders where millions come to America who never intend to assimilate, but rather to change America and it’s values.

They didn’t die in Iraq and Afghanistan so that our President could then “end” those wars, not win them, allowing our enemies to flourish in the created vacuum.

They didn’t die so that a monstrous federal government could control our lives–our healthcare, homes, finances, religion, and even our privacy.

The died for the Constitution, for freedom, and to defend the United State of America. They stood against tyranny. Will we?

Samuel Adams, was relentless in his battle against tyranny. In 1771, he wrote this in the Boston Gazette: “The liberties of our country, the freedoms of our civil Constitution are worth defending at all hazards… We have received them as a fair inheritance from our worthy ancestors. They purchased them for us with toil and danger and expense of treasure and blood. It will bring a mark of everlasting infamy on the present generation – enlightened as it is – if we should suffer them to be wrested from us by violence without a struggle, or to be cheated out of them by the artifices of designing men.”

On this Memorial Day, in addition to honoring and remembering those who gave us the “shining city on a hill”, it is my sincere hope that we will reflect upon saving America and assuring that we do not lose that shining light that these men and women died to preserve.

Memorial Day: A Season for Flags by Dr. Bill Simpson