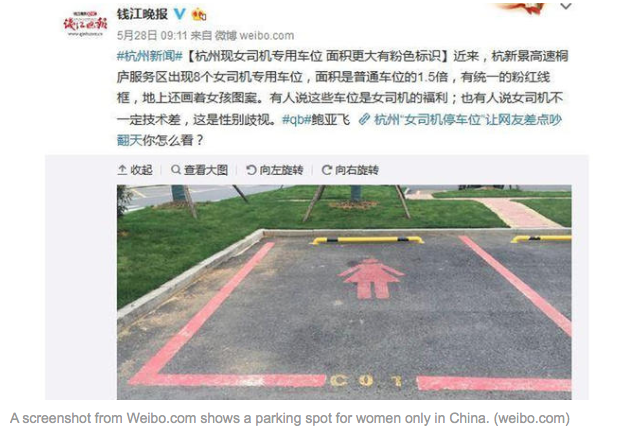 This is one of the most epically politically incorrect pieces we’ve seen in awhile.  From the LA Times:

The Chinese Internet was awash in debate over sexism Monday, spurred on by an unlikely subject: parking lots.

On Saturday night, the Qianjiang Evening News, a state-run newspaper, reported that since March, a highway service area in the eastern metropolis of Hangzhou had been offering extra-large parking spaces specifically for women. The women’s-only spots — 1.5 times the size of normal spaces – are framed in pink, and marked by icons representing a skirt-wearing woman.

“The bigger parking spaces are for women drivers whose driving skills are not superb,” Pan Tietong, the service area’s manager, told the newspaper. He said he had encountered female drivers who were unskilled at backing up into spots, and sometimes asked security guards to help them park.

The spots “are especially designed for women drivers,” he said. “It’s a humane measure.”

Despite the predictable exploding feminist heads, many Chinese women are in favor of the larger parking spots.  34-year old Lin Zhusi said, “Although I can park in normal parking spaces, my other female friends may need bigger spaces to park.”

“It’s a stereotype that women drivers are less skillful than men drivers — no one has proved that so far,” said Li Sipan, director of the Women Awakening Network, a Guangzhou-based women’s rights NGO.

But Virginia Tan, founder of Lean In China, a women’s empowerment organization, supported the scheme and said it could be especially helpful for pregnant women (who, in China, also have a bad reputation behind the wheel). “This is a step forward – society is adapting to some needs of women,” she said.

Hillary Clinton: How Much Guilt is Guilty?