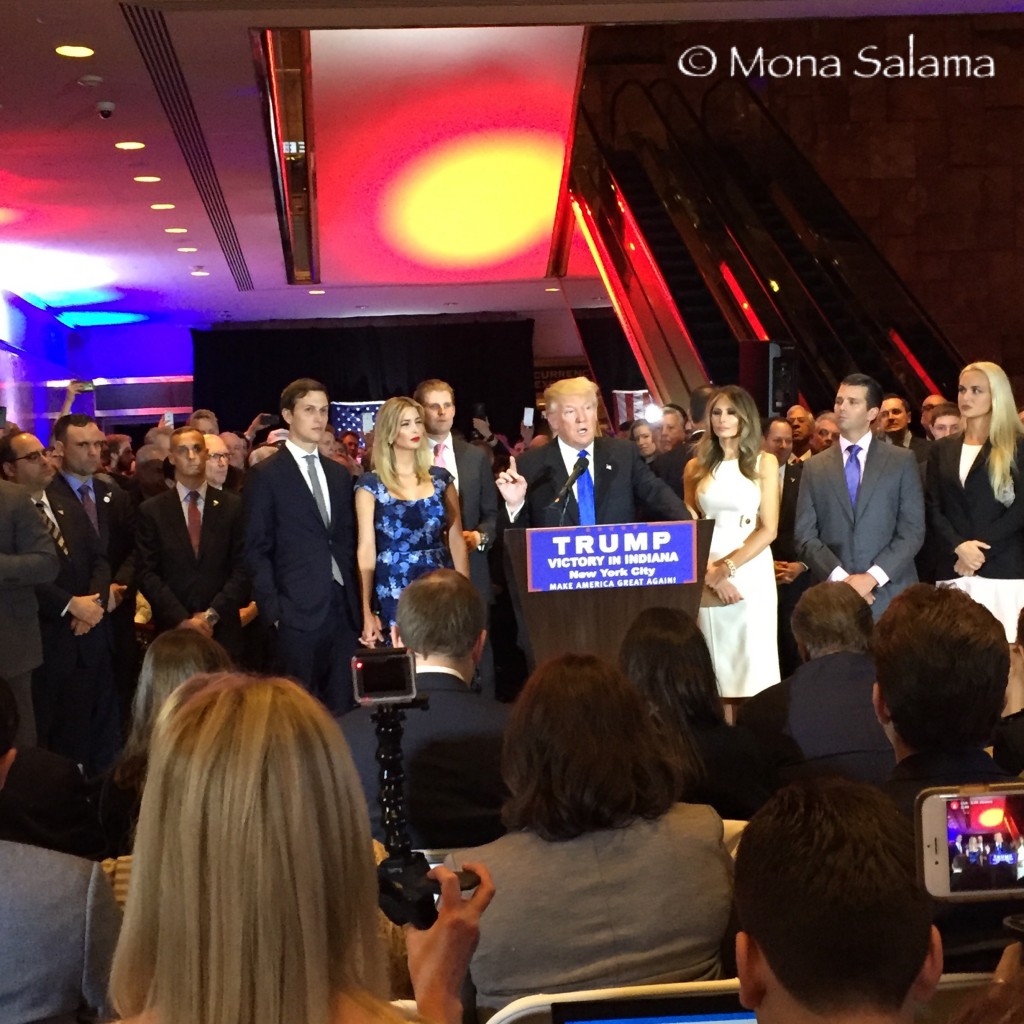 New York, NY. — After months of talks of a possibility of a contested convention fight happening in Cleveland has now ended as Donald Trump emerged as the GOP presumptive nominee after winning the Indiana primary Tuesday.

.@realDonaldTrump will be presumptive @GOP nominee, we all need to unite and focus on defeating @HillaryClinton#NeverClinton

Trump’s campaign manager Corey Lewandowski spoke to reporters prior to Trump’s remarks, dismissing the “Stop Trump” movement as a “passing fad,” and it’s time to unite to prevent Hillary from winning in November.

Indiana was a crucial opportunity for Cruz to stop Trump from reaching the magic number of 1,237 before the convention this summer. However, the crushing blow Cruz suffered, losing the last 6 Northeastern primary contest and recent desperate plays that didn’t sit well with voters, leaving the only candidate capable of stopping Trump to drop out as the movement is grasping on what to do next. Cruz, when delivering his remarks, never mentioned Trump by name nor offered any congratulation for the win. Trump, on the hand, praised the Texas Senator as a “tough competitor” with “an amazing future”

“Just so you understand, Ted Cruz, I don’t know if he likes me or he doesn’t like me, but he is one hell of a competitor,” Trump said. “He’s got an amazing future, so I want to congratulate Ted, and I know how tough it is. It’s tough. I’ve had some moments where it was not looking so good, and it’s not a great feeling, and so I understand how Ted feels and Heidi and their whole beautiful family. And I want to just say though he is one tough competitor and I can say that for the others.”

Focusing on the general election, Trump shifted his focus to his presumptive opponent, Hillary, who in an embarrassing defeat, lost the Indiana primary to Bernie Sanders after it was too close to call with her in the lead for most of the night.

Attacking Hillary for her husband implementing NAFTA during his tenure as Commander-in-chief, Trump offered another preview to reporters of future attacks, making clear Hillary’s husband will be a part of his target come this fall. “Her husband singed perhaps in the history of the world, the single worst trade deal ever done,” Trump said. “It’s called NAFTA, and I was witness to the carnage, over the last six weeks especially.”

“Fundamentally, our next president will need to do two things: keep our nation safe in a dangerous world and help working families get ahead here at home,” Podesta said in a statement. “Donald Trump is not prepared to do either. Throughout this campaign, Donald Trump has demonstrated that he’s too divisive and lacks the temperament to lead our nation and the free world. With so much at stake, Donald Trump is simply too big of a risk.”

As for John Kasich, the last remaining GOP presidential contender against Trump came in at a distant third place with only 8%. Kasich didn’t campaign in the Hoosier state, conceding the whole state last week to focus his resources elsewhere, an alliance both Cruz and Kasich formulate that would provide to be a total fail. Vowing to stay in the race and to continue on even though he cannot clinch the nomination before the convention. Kasich’s campaign strategist, John Weaver released a memo shortly after Trump was projected the winner.

“Tonight’s results are not going to alter Gov. Kasich’s campaign plans,” Weaver wrote in the email memo. “Our strategy has been and continues to be one that involves winning the nomination at an open convention.”

Trump was awarded all 57 delegates up for grabs in Indiana. The winner of the state received 30 delegates; while the rest of the 27 were divided up in nine congressional districts with the winner of over 50% in each district is awarded three delegates. With 98% reporting, Trump overwhelmingly won 53.3% of the votes with Cruz in second with 36.6%. Adding 57 delegates now brings Trump at 1,055 with Cruz at 564.

President Obama: They Just Aren’t That Into You.