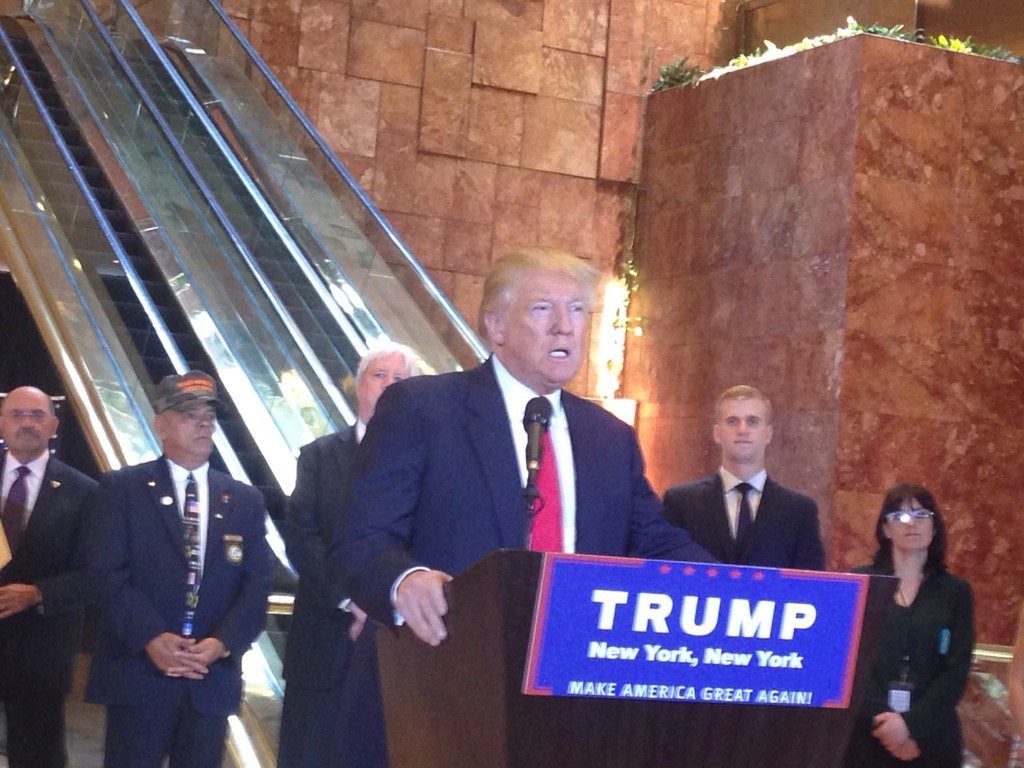 “I have raised a tremendous amount of money for the vets, close to $6 million,” Trump said at a news conference Tuesday morning at Trump Tower. “All of the money has been paid out. There are so many people who are so thankful for what we did.”

Over 42 charitable veterans’ organizations received a total of $5.6 million, with many of the donations were between $100,000 and $200,000. Reading from a list, Trump told reporters the various groups that received the money, including 22Kill, Achilles International Inc., American Hero Adventures, and Americans for Equal Living. Marine Corps- Law Enforcement Foundation received the largest donation of $1.1 million, followed by Navy Seal Foundation of $465,000.

Full list of 42 Veteran groups that received the $5.6 Million #DonaldTrump raised for Veterans in January pic.twitter.com/X9ITW1Cnsa

The money was raised in late January when Trump boycotted the final GOP debate hosted by FOX News before the Iowa Caucus. Instead of attending the debate, the GOP nominee hosted a televised fundraiser for veterans called “special event to benefit veterans organizations” where he announced he raised $6 million from a combination of wealthy friends and the public, along with $1 million he personally donated himself.

While reading off the list, Trump heavily criticized the media for taking a positive story and making it negative. “The press should be ashamed of themselves,” Trump said. “I have never received such bad publicity for doing such a good job.”

Weeks after the event, the campaign refused to disclose which veteran organization received the money raised. Recently, Trump’s campaign manager Corey Lewandowski told the Washington Post that the event only raised about $4.5 million due to some of the pledged contributors backing out, Lewandowski also stated the $4.5 million raised have all been given out as promised.

Trump, on the other hand told the Washington Post the total amount raised was higher than what Lewandowski stated and the reason for the late disclosure was due to his team vetting the groups.

“I had teams of people reviewing statistics, reviewing numbers and also talking to people in the military to find out whether or not the group deserved the money,” Trump told reporters. “I wanted to keep it private because I don’t think it’s anybody’s business if I want to send money to the vets.”

Trump added, “I didn’t want credit for it, but I shouldn’t be lambasted. Find out how much Hillary Clinton has given to the veterans — nothing.”

Outside Trump Tower a group called #VetsVSHate protested Trump for using veterans as a “political props”. Trump told reporters the group of veterans protesting is Hillary Clinton plants. As backup, Trump had his own veteran supporters to stand beside him during the press conference. Al Baldasaro, a New Hampshire state representative and a retired Marine took to the podium to lambast members of the media, preferably the liberal media for questioning the amount Trump raised for the veterans.

“Donald Trump is doing this from the heart,” Baldasaro said. “You’re all focused on the way he is raising money, and you’re not looking at the 22 veterans who are killing each other every day.”

Baldasaro went to explain how the protestors outside are supporters of Hillary. “You got a guy outside, McCoy. Go do a Google search on him, look at his Facebook,” Baldasaro said. “He’s out there he has pictures with the Clintons. They are using veterans as political pawns, it must stop.”

“I think the liberal media and I’ve been dealing with you for a long time,” Baldasaro added. “Get your heads out of your butts and focus on the real issues.”

After Trump’s conference, the veterans protesting held their own news conference to denounce Trump’s gesture and campaign remarks against Muslims and other race groups. Alexander McCoy, the head organizer of #VetsVSHate told the small reporters who gathered to hear him speak. “What Donald Trump doesn’t understand is he can’t buy veterans of this country, no matter how much he donates,” McCoy said. “Veterans are a diverse group of people and Trump is demanding to POWs, Muslims, Mexicans and women who, unlike, Trump, actually sacrificed for their country.”

Baldasaro came outside to challenge McCoy, who he showed the press outside a picture of McCoy with Hillary. According to The Tab, McCoy told the site he is a big supporter of Hillary, but told reporters the group is non-partisan and didn’t come Hillary’s campaign. Baldasaro tried to challenge McCoy, but McCoy ignored the decorated veteran, stating he will be “happy to discuss over a beer.”

Watch Baldasaro attempting to call out McCoy outside Trump Tower: