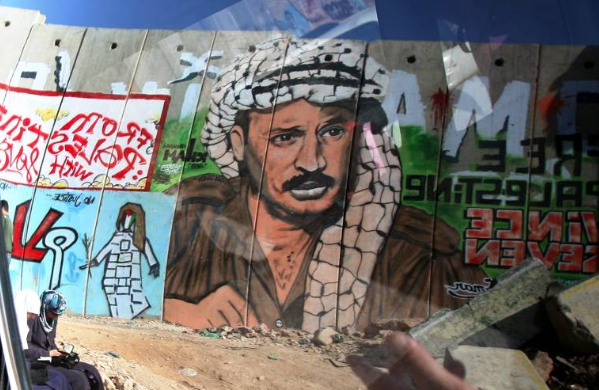 150 years ago, Mark Twain visited Muslim-occupied Israel and wrote of “unpeopled deserts” and “mounds of barrenness”, of “forlorn” and “untenanted” cities.

Palestine is “desolate”, he concluded. “One may ride ten miles hereabouts and not see ten human beings.” The same is true of the Palestinian Museum which opened with much fanfare and one slight problem. While admission is free, there’s nothing inside for any of the visitors to see except the bare walls.

The Palestinian Museum had been in the works since 1998, but has no exhibits. The museum cost $24 million. All it has to show for it are a few low sloping sandy buildings indistinguishable from the dirt and a “garden” of scraggly bushes and shrubs. The Palestinian Museum is open, but there’s nothing inside.

It’s hard to think of a better metaphor for Palestine than a bunch of empty buildings designed by Irish and Chinese architects whose non-existent exhibits were the brainchild of its former Armenian-American director. It’s as Palestinian as bagels and cream cheese. Or skiing, hot cocoa and fjords.

Over the Palestinian Museum flies the proud flag of Palestine, which was originally the flag of the Iraqi-Jordanian Federation before the PLO “borrowed” it, and visitors might be greeted by the Palestinian anthem composed by Greek Communist Mikis Theodorakis. If it sounds anything like the soundtrack from Zorba the Greek, that’s because they both share the same composer.

All of Palestine is so authentically Palestinian that it might as well be made in China. At least that’s where the stained Keffiyahs worn by the stone throwers hurling rocks at passing Jewish families while posing heroically for Norwegian, Canadian and Chilean photojournalists are made.

Palestine is an empty building with nothing in it. It’s a political Potemkin village. There’s a flag, an anthem, a museum and all the trappings of a country. But if you look closer, there’s nothing inside.

The Palestinian Museum’s chairman, Omar al-Qattan, who was born in Beirut and lives in the UK, said that the “Palestinians” needed positive energy so badly that opening an empty museum made sense.

Just think how much positive energy can come from realizing that you have no culture, heritage or history to put in your museum. But actually the Palestinian Museum had to open in time for the Nakba. The Nakba is the annual commemoration of the failed invasion of Israel by foreign Muslim armies. The invasion by Egyptian, Iraqi, Syrian and Jordanian forces began on May 15. Egypt’s General Muhammad Haidar declared that the invading Muslim forces would be occupying Tel Aviv in two weeks.

Egyptian forces hit the village of Kfar Darom which had a few hundred residents and a few dozen militia members. They hit it with tanks, armored vehicles, infantry battalions, artillery and bombers. The invading colonial Muslim forces lost two soldiers for every single Jewish militia defender. Instead of taking Tel Aviv in two weeks, they were stuck laying siege to a tiny village for two months. That’s the Nakba. And you can see why the Muslim settlers in Israel have an annual day of mourning over the miserable defeat of their invading armies at the hands of the indigenous Jewish population.

But the empty Palestinian Museum isn’t about to let setbacks like a complete lack of things to put inside its bare walls get it down. Instead it’s doing what the PLO has always done in troubled times.

Hawari will have to decide what, if anything, to put in the Palestinian Museum. The chairman however thinks that it should celebrate Islamic terrorism and discuss who was living in Israel first. These two topics are the beginning and end of any Palestinian identity. And both of them involve hating Jews.

Eliminate Jews, as the Muslim and non-Muslim champions of the Palestinian hoax have attempted to do, and there is no Palestine left. Palestine is a parasitic political entity that derives its wealth, its water and its electricity from Israel. It also gets its history, its culture and its entire reason for existing from Israel.

The Muslim settlers claim that King David was a Muslim, that Jesus was a Palestinian and that the Star of David, which long predated Islam, is an Islamic symbol. The only Palestinian culture is appropriation.

Palestine can no more exist without Israel than a Plasmodium malariae or an HIV virus can exist outside a warm body. Despite all the whining about an independent state, the only purpose for a Palestinian state that the PLO, Hamas or anyone else has been able to conceive of is attacking Israel.

Palestinian identity has no meaning or context without hating Jews.

The Palestinian Museum is as empty as the souls of a populace that has wholly given itself over to a cult of death. Nothing can be put in there except hatred of Jews.

Omar Al Qattan complains that Israel makes it difficult to import exhibition objects. But you would think that a museum a few miles outside the capital of the Palestinian Authority could find something “Palestinian” to exhibit in what it claims is its historic land. And yet the bare walls testify that it couldn’t.

Palestine is a Potemkin village. It has plenty of Muslim settlers squatting on the sites of historical Jewish towns and villages, but it is as desolate as it was when Mark Twain visited it. Its culture is an empty building. There are plenty of bodies, but there is no soul. Palestine has no past and no future.