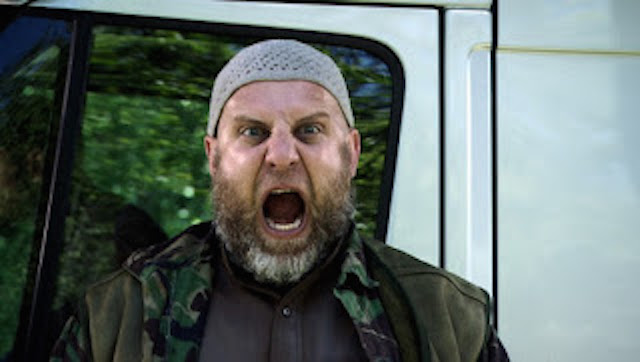 A Muslim terrorist stabbed four people at a train station near Munich while screaming, “Allahu Akbar”. In between proclaiming the glory of Allah, he also shouted that his victims were all “unbelievers”. A woman heard him say, “Infidel, you must die”.

The German authorities came to the inescapable conclusion that the attack had nothing to do with Islam. Instead the stabber had been “mentally ill” and was probably not even fit to stand trial. The Koran wasn’t to blame. It was the fault of his psychological problems.

This isn’t surprising. It’s a well known fact that there is no such thing as Islamic terrorism. Instead there are just a lot of people out there, of Muslim origin, suffering from a unique set of psychological problems that cause them to shout Allahu Akbar while trying to kill people who aren’t Muslims.

This should not however be attributed to the notoriously peaceful religion of peace.

Just last week the FBI busted James Muhammad who had been plotting to shoot up a Florida synagogue for the “glory of Allah”. Muhammad explained that he wanted to murder the men, women and children praying at the synagogue because, “I have a lot of love for Allah”.

Not only did this minor story receive only a fraction of the attention devoted to the truly important news that a Muslim teenage girl had Isis written in her High School yearbook, but Muhammad’s lawyer insisted at a bail hearing that he isn’t a terrorist, just suffering from mental problems.

Much like Ahmed Ferhani, who plotted to bomb a New York synagogue a few years ago to, in his own words, “send a message of intimidation and coercion to the Jewish population of New York City.” Ferhani however wasn’t just a racist terrorist, he’s also a cause célèbre for The Nation which five years later continues to advocate on behalf of an aspiring anti-Semitic mass murderer. The latest report from the left-wing magazine breathlessly informs readers that prison guards are being mean to poor Ahmed and that he never really meant to kill any Jews, but was entrapped due to his “psychiatric problems”.

Muhammad and Ferhani join Shahawar Matin Siraj who was convicted of plotting to bomb the Herald Square subway station in New York. Siraj was an illegal alien who worked at a Muslim bookstore and boasted, “I want at least 1,000 to 2,000 to die in one day.” His family and defenders claimed he had a low IQ. His co-defendant, James Elshafay, suffered from, you guessed it, psychological problems.

Matthew Aaron Llaneza converted to Islam and tried to blow up a bank in Oakland. His defenders blamed mental problems. Muslim ISIS supporter Emanuel Lutchman plotted a machete attack in Rochester last year. Despite his contacts with ISIS, the culprit once again was mental illness.

Sami Osmakac plotted to bomb Florida nightclubs. He recorded a “martyrdom” video issuing a call to “Muslims worldwide” to carry out terrorist attacks and avenge Osama bin Laden. He declared that the toenail of a sinning Muslim is worth more than all the non-Muslims in the world put together.

You’ll probably be surprised to hear that his lawyer blamed “mental illness” and claimed that his client had been “entrapped”. As has every Muslim terrorist ever for 1,400 years since Mohammed.

Mansour Arbabsiar was dispatched by Iran’s Revolutionary Guard to kill the Saudi ambassador in Washington. His defense claimed that he was bipolar. His lawyer insisted that the fact that he had confessed to everything proved that he was mentally ill because his illness, “led him to believe that he could convince the agents to see things his way”. Him and every other criminal out there.

Even when Muslim terrorists don’t claim mental illness, the media is happy to plead it for them.

When Nidal Malik Hasan murdered 13 Americans in the Fort Hood Massacre, Time and the New York Times suggested that he had somehow contracted PTSD from treating soldiers. In fact Hasan was a Muslim terrorist. No media outlet would stop claiming that he had PTSD long enough to read his letters in which he explained that he was a Jihadist, supported ISIS and killed American soldiers “for the greater cause of helping my Muslim brothers” and defending the “Islamic Empire”.

The defense for the surviving Tsarnaev terrorist who had carried out the Boston Marathon bombing went one better by blaming the “severe psychiatric disorders” of his parents. The Boston Globe, had interviewed psychologists to determine what possible “mental health conditions” he might have had.

Any mental condition will do when it comes to Muslim terrorists.

And the media never leaves any exculpatory stone unturned when it comes to finding a crazy excuse for a Muslim terrorist. The Los Angeles Times tried to find excuses for Syed Rizwan Farook, the San Bernardino Muslim killer, by claiming that he had grown up in a home “racked by mental illness”.

Internationally all Muslim terrorists are also mentally ill. Zehaf-Bibeau opened fire at the Canadian Parliament. Terror apologists claimed that he was mentally ill. In the UK, Muhaydin Mire tried to behead a man while shouting, “This is for Syria”. He had ISIS material on his phone and pictures of the Paris and San Bernardino shootings. His brother claimed that smoking pot had given him a “mental problem”. Sydney hostage taker Sheikh Man Haron Monis, who had become infamous for sending threats to the families of dead Australian soildiers, had his actions blamed on “mental instability.”

Michael Adebowale, one of the Jihadists who brutally beheaded British soldier Lee Rigby on a London street, also went the mental illness route.

In Russia, Muslim monster Gyulchekhra Bobokulova beheaded a 4-year-old girl and displayed her head in the street while shouting, “Allahu Akbar. I hate democracy. I am a terrorist. I want you dead.” Faced with these bafflingly inscrutable statements, the authorities blamed mental illness.

It was the safe thing to do. It always is.

Mental illness requires nothing of us except horror. Islamic terrorism demands that we do something about it. And that’s the last thing that the authorities who helped make this mess want.

German authorities, like their American, Russian, Europe and Australian counterparts, don’t want to take on Muslim immigration. It’s much easier to shove some more money at mental health clinics.

And what is mental illness anyway?

Saudi religious police have a special Anti-Witchcraft Unit and there are actual witch trials. Majorities of Muslims don’t believe that Muslims carried out the 9/11 attacks. 40% of Pakistanis believe that fathers have a right to kill their daughters if they engage in premarital sex. Half of British Muslims think that the Jews are in league with the Freemasons. A third believes that Princess Diana was murdered to stop her from marrying a Muslim.

Ideas and behaviors associated with mental illness in the West are mainstream in parts of the Muslim world which exist in a pre-rational medieval universe brimming with conspiracy theories, paranoid delusions, lack of personal responsibility, erratic emotions and an inability to apply reason to reality.

Western psychiatric benchmarks don’t mean much in the Muslim world where witchcraft is a major problem, Jewish conspiracy theories abound and genies are responsible for psychiatric problems. Killing your daughter or just non-Muslims in general is socially approved behavior. The Muslim world has fundamentally different social norms than we do. And that means very different concepts of sanity.

Misattributing Muslim terrorism to madness is convenient, but meaningless. It’s a way for us to avoid dealing with the difficult questions posed by Islam. And that avoidance is also a form of insanity.

Who Is Sadiq Aman Khan, the New Mayor of London?