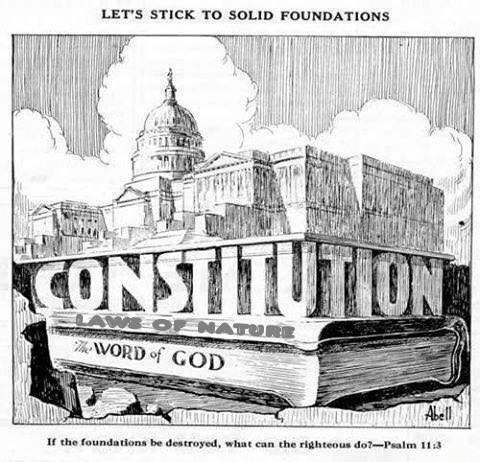 Since the beginning of the 2016 GOP primary, many have been debating the true meaning of Conservatism. Not only that, but some are also debating whether or not Conservatism even has a place in the United States anymore, much less a home in the Republican party. Needless to say, this sentiment is leaving many Conservatives feeling as though they are in exile.

However, to truly understand Conservatism, is to recognize that it is indeed, the very conscience of America, that distinct warning bell that alerts us when we, as a nation, start going astray from all that is good and wholesome about us. Without Conservatism, the United States would not only morph into an ugly, dark, conflicted, and empty shell of her former self, but the absence of her light would cause the rest of the world to plunge into great darkness and extreme chaos.

“America is the most exceptional nation in the history of the world because the U.S. Constitution is the best political document that’s ever been written. Because it says something different than almost any people and any government has believed in human history. Most governments in the past have said “Might makes right,” and “The king has all the power and the people are dependent subjects.”

And the American Founders said, “No, God gives us rights by nature and government is just our shared project to secure those rights.” Government is not the author or source of our rights. We don’t make America great again by giving more power to one guy in Washington, D.C., We make America great again by recovering a Constitutional Republic where Washington is populated by people who are servant-leaders who want to return power to the people and to the communities.”

I wasn’t always a Conservative myself. In fact, I was very Liberal until I gave my heart to Christ. And, it was through my relationship with my Creator that I was drawn to learning more about the birth of one of His signature masterpieces—the United States of America.

As a Conservative, I personally believe that: Our Founders (although flawed like the rest of us) were brilliant men who sincerely believed that Divine Providence authorized the very existence of our nation; the United States was founded on Judeo-Christian values; our rights come from God, and that government’s main purpose is to secure these rights; our government was also established to reward good and to punish evil; U.S. citizens are the true sovereigns in our Republican government, and not subjects; government officials are to be public servants and not our masters; the only way to maintain our Constitutional Republic is to have moral and virtuous leaders (lest they become tyrannical); the only way to have moral and virtuous leaders is to have a moral and virtuous electorate; the Constitution is an anti-theft document that recognizes and protects private property. I also believe in following the rule of law rather than the whims of man.

As a conservative, I believe that America was founded on the precept that each person is the owner of his or her own life (which consists of: life, liberty, property). I also believe that our government was established (by God) to protect this very ownership from foreign thieves and domestic thugs.

Lastly, I believe that it is our duty as Americans to preserve the above ideals and to pass them on to our children. After all, as Conservatives, we are the conscience of America, that little alarm that ‘sounds’ when our nation deviates from her founding principles. We are also the light that shines on any corruption that could destroy her very fabric.

As Conservatives, we are not only here to keep BOTH political parties accountable to our nation’s founding precepts, we are also here to help and encourage each other to attain to the higher standards our Creator has intended for us as individuals and as a nation.

On the other hand, to understand Progressivism, is to understand the ultimate heist of the United States of America. Progressivism is a remarkable and brilliant scheme to steal this nation, and it’s working extremely well, unfortunately.

Progressivism is not only stealing America’s wealth, but it is stealing her most sacred treasures, including her: Judeo-Christian values, morality, personal responsibility, independent thought, religious liberty, success, personal ambitions, and dreams, etc. Using schemes of civil chaos and creating moral confusion, Progressives are stealing America, and they’ve stolen a good bit already. But what else would we expect from a movement that’s rooted in raw envy?

As Dinesh D’Souza points out in his book, Stealing America:

“When I use the term ‘stealing America,’ I am talking about the theft of the wealth of America. I am not talking about some group of people living off the public weal, or taking control of this or that industry. I am not even talking about theft of resources of the federal government. Rather, I am referring to the entire wealth of the nation, the values of the homes, and lifelong savings of all the people, the sum of the assets of every industry from banking to electronics to oil drilling, all the funds allocated to health and education and every other service, both private and public; in sum, the entire wealth of America, built over more than two centuries. The thieves I am speaking about want all of it.

Progressives are modern-day despots who use their positions to snatch more power and accumulate more money from the very people who elect them. For years, Progressives have been robbing Americans of their property, their heritage, their principles, their liberties, and their morality. And they’ve done so under the guises of ‘justice’ and ‘fairness’.

It comes as no surprise that Progressives will do all they can to mock, marginalize, and silence Conservatives into extinction. Conservatives can certainly spot a crafty con artist when they see one.

So, this is no time for Conservatives to sit down and stay quiet. In fact, it’s time to shine a bright light directly on the crime. Hold on to those founding principles and don’t surrender your values just to simply appease these thugs. Use your own networks of influence and think of new ways to apply your Conservative principles to the world as it is now. It’s time to seek new opportunities to publicize and implement our ideas.

As Dinesh D’Souza suggests, “Our best hope is to create new forms of education and make the existing university system—which is outdated and costs too much–obsolete.”

We must also continue to work on getting all the crooks out of elected office. Stop voting for con artists and start removing them from power. That means some of us may even have to run for political office ourselves.

Most importantly, it is time to remind our fellow Americans that we are an anti-theft society. This means we must work on teaching young people a new story about America–which includes the Progressive assault on our nation in recent decades, as well as the affirmation of America’s founding principles.

As Conservatives, we are the remnant that is conserving the very spirit of the American Revolution. While our numbers may be small, we are still incredibly powerful.

As Samuel Adams once famously stated:

“It does not require a majority to prevail, but rather an irate, tireless minority keen to set brush fires of freedom in people’s minds.”