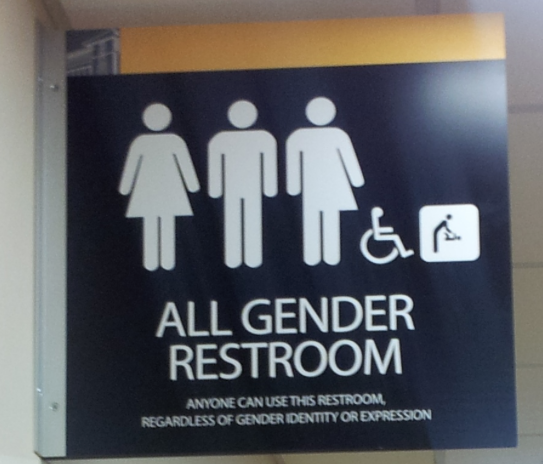 Let’s talk transgender. Yes, it’s been talked to death, but I want to have this conversation.

First, let me start by telling you where I’m coming from. I am a Christian and I have a strong sense of what is “wrong” or “right.” I am not perfect and I choose “wrong” way too many times. Thank God He sent His only Son to fill in for me because I screw it up a lot.

I view transgender people as having a psychological problem that is deeply sad. I am sad for them, I wish for them to get help and know that they are perfectly made the way they are. I don’t think they should be encouraged in their illness, nor do I think they should be abused or ostracized. I believe they need love and acceptance as children of God who are lost and confused and oftentimes ill beyond what they can “fix” on their own.

I want to reach out to these people and share the Gospel with them. If they don’t choose to listen or receive it, then so be it. Ultimately it is up to the Lord as to whether or not their hearts are softened, anyway.

I’m tired of the argument that there are transgender people who know the Gospel. If anyone truly knows the Gospel, they repent and try to live walking with Jesus. And it’s hard. Incredibly hard. This is not hateful, it’s fact, its truth.

If I love Jesus, wouldn’t I want to share it with everyone I come across? Isn’t it unloving to not share the truth with people? I believe it is. That said, I am not good at stepping out and sharing with others. This culture has made it difficult to do.

In fact, the last time I spoke of this, regarding Caitlyn Jenner, I received tons of backlash. People hated me and the message I had. In the Bible Jesus says in John 15:18, “If the world hates you, know that it has hated me before it hated you.”

That is just part of the spiritual portion of this problem. Now let’s talk about the practical.

We live in a world where the comfort of a single digit percentage of folks outweigh the majority.

We have parents saying, “Oh well, our children have been too comfortable for too long. No harm in introducing them to uncomfortable situations.”

We live in a very frightening world of blurred lines. In fact, I would posit that there are no lines anymore.

The basic science that so many non-Christian people rely on to shove climate change down our throats is completely ignored when the absolute fact of gender is right there for everyone to see.

People who struggle with gender identity are sick. Not sick as in “disgusting.” Sick as in I truly believe there is something not working right in their head. They are to be listened to and empathized with.

They are not to be coddled and encouraged in their illness. If I have lung cancer are you going to buy me cigarettes and exhort me to smoke as often as I can? Are you going to have parades about it? I think not. Acknowledging this as illness is not hateful.

The argument that pedophiles already have access to our kids so why worry about a transgender person going into the bathroom with them is the most ignorant thing that can be said. Yes, pedophiles will operate wherever they can. However, why would we effectively leave our front doors unlocked with a “Welcome” sign on it when there is a sexual predator next door?

I am not saying transgender people are pedophiles. I am not afraid of transgender people. I do not hate them. I am not clueless enough to believe they haven’t been using opposite bathrooms for years. I am worried about the perverts who are not actually transgender claiming gender fluidity to get into the bathroom. Sure, they have probably done this before by just walking into a women’s bathroom but why make it easier?

If the fact of gender can be denied what else can be denied? If I feel like a federal employee with a high clearance level. I might not have the badge to prove it, but I feel like one. You must let me in or I’m screaming discrimination. You can’t deny it. You don’t know what I feel in my head.

The only solution to this problem, and it is only a solution if people use it, is to create a separate bathroom for people to choose to use if they want. Of course, we will have the people screaming that a separate bathroom aims to separate people and treat them like the US did before Brown v. The Board of Education.

In fact, people like to claim this is a civil right. It’s a defining civil rights problem of the day. Even Obama comes out and decrees that schools must let trans kids use whatever bathroom or locker-room they feel comfortable with. Boys can now play on girls’ sports teams. Of course, Oregon is always ahead of the curve. Our DOE put out its own decree a week before the fed. If we don’t comply we will lose fed money. Hey, I thought we weren’t controlled by the fed! Who knew?!

Sadly, there are parents who attack children who are uncomfortable with this set-up because they are not evolved and obviously live with bigoted and hateful parents.

Even though I feel like I have presented good practical arguments here there are people who will call me a bigot and a self-righteous Christian.

I have said that I don’t hate transgender people. I do not fear them. I do not want them ostracized and I think they need Jesus, as we all do. This is my belief. Just because it is not your belief does not mean it is inherently evil. I don’t believe the people who disagree with me are inherently evil. This goes to the core of who I am, as gay people and transgender people say their sexuality goes to the core of who they are.

The difference is, I will be slaughtered for my beliefs and they will not. I am part of the 97% of people who are heterosexual and do not feel comfortable sharing a bathroom with someone who may not be transgender but who is a pervert taking advantage of the stupidity of places like Target. Heck, I even might be uncomfortable sharing with a transgender person, if I knew it was happening. Who knows?

Being a Christian and believing the Bible doesn’t mean I’m a hateful person. It means I want everyone to know the truth of the Gospel. It doesn’t mean I’m going to round up all people with different sexual proclivities and make them live in a pen or punish them in any way. It means I feel deeply for them and their issues. It means I want to help them. And for goodness’ sake it doesn’t mean I need to sit for hours and explain how the New Testament overrides in a lot of ways a lot of Leviticus. Which is what unbelievers like to throw at us.

It’s just that my version of helping doesn’t include promoting their illness and celebrating it. It means following some common sense ideas and let everyone live and let live. It means that I want to help them but in a world where we celebrate “differentness” the truth in love means hate.

Indeed, the world is upside down.

Who Is Sadiq Aman Khan, the New Mayor of London?