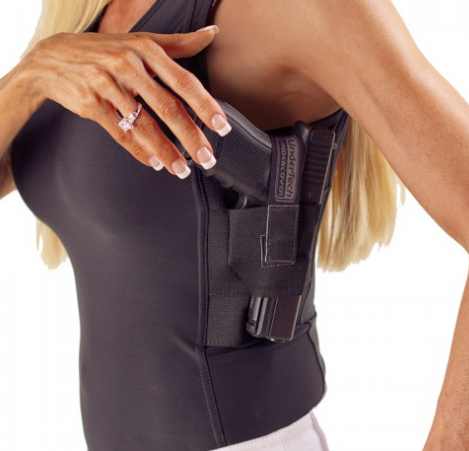 Recently I’ve taken up running. Not just running once in a while, but running five times each week and registering for any 5k, 10k or half marathon that is within an hour of my house. I’ve also run a full marathon and am crazy enough to be training for another one! Along with the race registrations, shoes, and activewear that come with this “free” sport, I’ve also started following several running groups on Facebook. I enjoy the comradery of fellow runners and the useful tips and suggestions that are posted on a daily basis.  As I’ve joined the running community, I’ve realized that runners are some of the most supportive and encouraging people on the planet.

Several months ago I was scrolling through my Facebook feed and saw a thread on one of my running pages. One of the members of the group posed a question about what holster was best for running with a concealed firearm. I immediately clicked on the thread and began reading the responses, because it just so happened that I was in the market for a comfortable, safe, and convenient way to conceal my handgun while running.

I was shocked by the responses that I read from the usually caring and encouraging group of people. “Why do you feel the need to run with a gun?” one member asked. Another snidely wrote, “What are you going to do? Shoot the neighbor dog that chases you?” I couldn’t believe the negative comments that were being posted about this woman’s very sensible question. As runners, we always hate hearing the story on the news about the woman running by herself on a trail who was attacked, raped, or murdered. We think a lot about safety while we run: wear bright, reflective clothing, don’t run at night, have a running buddy, carry pepper spray, etc., but the minute a woman decides she wants to run with a weapon, specifically a handgun, we’ve somehow taken self-defense too far.

The gun controversy is a hot topic right now in our country. With mass shootings occurring more frequently and murder rates rising as gun laws are becoming stricter, it is a subject that can’t be ignored any longer…especially for women.

So here are the reasons why I Conceal Carry:

1. I don’t like depending on other people for my safety.

Actually, I don’t like depending on other people for much of anything. My parents instilled a sense of independence in my sisters and me from a very early age. I distinctly remember my mom sitting me down and talking with me about a career path. She explained to me the difference between a career and a hobby and she guided me to pursue a lucrative career in college instead of taking classes that would be more of a hobby for me. When I started becoming interested in boys and wanting a boyfriend, my parents told me to be secure and happy with myself before I expected to find security and happiness in a relationship. I think many parents, conservatives and liberals alike, want to instill in their children a sense of independence and self-reliance. There’s nothing noble about being dependent on other people, whether it’s financially, emotionally or otherwise. When it comes to my own personal safety, I want to know that I can independently protect myself. I can’t rely on the government, other people, or even my husband, to protect me in a dangerous situation I may encounter.

I remember how excited I felt when my permit to carry a firearm arrived in the mail (about 3 months after I took the two day class and applied online…thank you Illinois for having some of the strictest gun laws in the country). I immediately loaded my handgun, put it in its holster, and stuck it in a safe pocket of my purse. I remember feeling invincible and capable to protect myself in any situation. The strangest thing happened, though, when I walked into a fast food restaurant for the first time with my handgun in my purse. I immediately began looking around at all of the other customers and the teenage cashiers behind the counters and thinking, “I’m now responsible for all of these peoples’ safety too.” I imagined how I would protect, not only myself, but everyone else in that restaurant if a mass shooting took place. Whether you agree with people being able to conceal carry or not, I’m pretty sure you’d be thankful that the bad guys weren’t the only people with guns in a situation like that.

3. It is my constitutional right to bear arms.

I try to respect the rights of everyone I encounter on a daily basis. Although I may not agree with your opinions or lifestyle, I respect your right to exercise your freedom. That is what makes American the greatest country in the world! As an American citizen, I still have the right to bear arms and to protect myself and my family. There are many politicians, our president included, who would like to take away the right for me to legally carry a firearm in my purse. As I said earlier, in the state of Illinois, exercising that right is more and more difficult and many people don’t even bother with it because of the many hoops that you have to jump through (hats off to Chicago for ruining it for the rest of the state). I was shocked when I took the mandatory training and field test for my concealed carry permit and I was the ONLY female in the entire class! Women, you have a right to bear arms too! Of course it’s a hassle and it takes time and a little money, but don’t you want to protect yourself and your family? It isn’t your husband’s job or the government’s job…it is up to you to bear arms and fight for and protect those closest to you.

Anti-gun liberals may disagree with me and our government may fight to take away this right, but as long as I am able I will continue to carry a firearm with me in my car or in my purse, and yes, even while running.

ISIS - Out Of Control