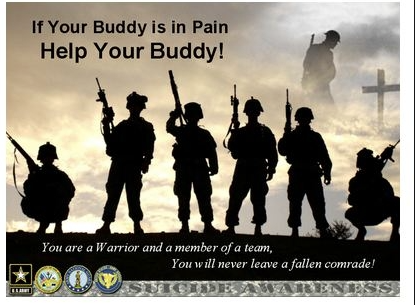 Where there is no vision, the people perish…

The Pentagon reported recently on the latest findings from a Department of Defense report which shows the latest active duty U.S. military service members’ suicide numbers.  265 active-duty service members killed themselves in 2015, continuing at least a seven year trend of high suicide rates in the US Military. This doesn’t include Veteran suicides which also remain too high.

Even worse, Reservists in the Army, Navy, Air Force, Marine Corps and the National Guard saw a dramatic increase from 170 suicides in 2014, to 210 in 2015. While last year’s numbers are down from 220 suicides in 2013, all the numbers show that suicide among active duty service members is a very disturbing crisis which deserves every effort to find real solutions to help our Troops and Veterans.

The number of suicides among troops has been increasing steadily since 2001 when there were 145 suicides until 2012 when the number was nearly doubled at 321. The suicide rate for the Army 2013 was nearly 30 per 100,000 soldiers, which was significantly higher than the rest of the US population of 12.5 per 100,000 civilians for the same year. While numbers dropped by approximately 20 percent the next year, they have still been higher than the years 2001 to 2005.

U.S. troops have been at war since 2001 beginning with Afghanistan and are still presently there. In addition they have served combat operations in Iraq from 2003 to 2011. We’ve had boots on the ground continuously in both countries for 15 years. I’ve written numerous articles over the past few years on the issue of suicide among our Troops, Special Forces members and Vets, as well as underlying issues such as PTSD and TBI, but the latest numbers are too much the same and still unacceptable.

The Pentagon has funded 61 studies in recent years at a cost of more than $100 million, according to a Rand report.  They are trying to find solutions to help military service members and suicide prevention training is mandatory in all five military services, including the Coast Guard.

Likewise, the Defense Department puts out an in depth annual analyses of military suicides and attempts. The 2014 Department of Defense Suicide Event Report examined the rate of suicide in the services, studying demographics including age, gender, rank and marital status, as well as known or suspected causes of suicide behavior. It was released in January 2016 and can be read online in a PDF file.

While the Pentagon and DOD say suicide prevention is a top priority, one has to wonder what kinds of real efforts they are putting forth as the number of service members’ killing themselves hasn’t gone down.  Making people aware, and encouraging service members to seek help doesn’t do much when those who do seek help, or those who want to offer it are penalized for their efforts.

A long-term study by the Army which spent 5 million dollars developed a way of predicting what group of soldiers is most likely to commit suicide.  The VA claims to support the system and will launch a pilot program for helping therapists concentrate efforts on veterans with strong self-destructive characteristics.

This leads me to ask, what about those whom have less than honorable discharges- mainly due to being kicked out because of mental health issues?  Who will help them?

Late last year, the Army agreed to conduct a review of cases in which soldiers are being discharged from the service for misconduct even though they were diagnosed with or showed signs of PTSD and/or TBI, anxiety disorders or other mental health issues. The Army agreed after US Senators demanded an investigation by the Army inspector general.

Obviously the VA never got the memo as it was reported at the end of last month that the VA unfairly denied services to 125,000 post-9/11 veterans because they were less than honorably discharged from the Military.

Congress has stated “only those veterans whose conduct would have led to a dishonorable discharge in a court-martial should be denied VA services.”

The only problem is that the VA’s internal rules allow them to deny services to the vast majority of post-9/11 veterans with other than honorable discharges, including disabled veterans.

A joint study released at the end of March was conducted by two veterans’ advocacy groups and Harvard Law School.  Their study showed that some veterans are being denied of basic healthcare and disability services and Veterans who have served since 9/11 are being excluded from the VA at a higher rate than any other group of veterans. This includes more than 33,000 who served in Iraq and Afghanistan. 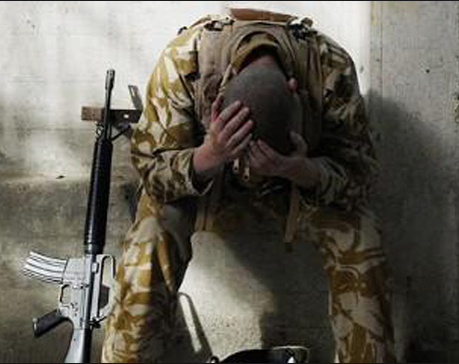 While I’m not so naïve to believe every misconduct charge isn’t deserved, we’d do well to realize that all of these men and women served voluntarily and many have had multiple deployments. Many of them carry visible and invisible wounds but instead of getting the help they need. They did not receive a dishonorable discharge. Yet, their less than honorable discharge makes it more difficult in some cases to better themselves once they’re out of the military.

With the current administration’s lack of vision, lack of even identifying an enemy that many of these service members have been fighting for over a decade,  reduced troop levels and gutting our military forces, it is putting an ever increasing load on the backs of fewer troops.

These men and women protect mine and every other American life as well as defending others around the world.  With everything from current ROE in combat, loss of moral, not having the support of leadership, more focus on social experimentation than real on the ground experience, loss of rights concerning religious faith, knowing that if they exhibit any signs of mental stress they can face discharge, and knowing the messes of the VA system – they don’t see a way out except by taking their own lives.

They are trained for combat and defense, but they’re not machines. They are people who sacrifice much for the rest of us.  They need to know we care.

Homelessness - "Paying It Forward" In America