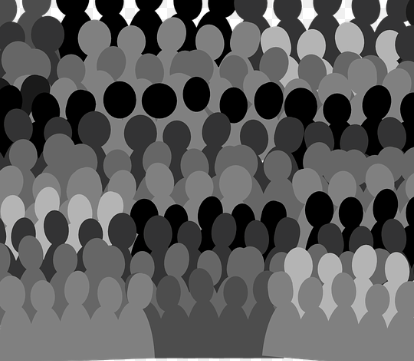 Gray people living in gray houses having gray lives and gray destinations… Socialism is based on mediocrity. Anyone who excels, anyone with aspirations and individuality, anyone who dares challenge the order and demonstrates ability – is not welcome. Left-forward, march! Sing the International and be happy in the herd!

You can see this still, anywhere socialism is extant: China, for instance. Chinese students coming to the United States are devoid of imagination. They excel in math and memorization, but give them an essay topic – and they are like a stranded seaman on a raft without a paddle or sail. They sail with the wind.

Socialism is founded on conformity. It subjugates character and individuality, shaves off sharp edges and disciplines you whenever you diverge, refusing to toe the line. When I was in kindergarten, they used to take us out for a walk. We had a rope with regular knots on it and we had to hold the rope, arranged in pairs like little soldiers. We were not allowed to run or scatter. In high school, we all had military drill exercises in PE classes: turns, salutes, or simply standing in line – all in regular, precise order.

Our Founding Fathers gave US a Republic: the response is attributed to Ben Franklin at the close of the Constitutional Convention of 1787, when queried as he left Independence Hall on the final day of deliberation. Dr. James McHenry’s notes read: “A lady asked Dr. Franklin: ‘Well Doctor what have we got a republic or a monarchy.’ – ‘A republic,’ replied the Doctor ‘if you can keep it.’”

Indeed – our Freedom, if we can keep it!

The magnitude of Sanders’ supporters is truly astounding. They will argue that capitalism is evil – or at least so imperfect that we need socialism, or “more socialism.” They are persuaded that “we already have socialism” and point at the social security and Medicare as examples. Those government instituted redistribution plans have nothing to do with socialism though. They could not exist in socialism, because socialism takes from everyone and allots everyone the same: there is one plan for everybody. It is inconceivable to sue and get paid when injured, because government is the only insurer and you cannot sue the socialist government.

Plans like Medicare and social security are the advantages of market economy: hospitals and insurance companies still compete, although under the umbrella of state & federal governments. Some regulation is good, but not when it concerns the outcome or distribution. You can regulate where the crash barriers are, where the sidelines will be and where the goalposts are. You cannot regulate everything along one white line pole-to-pole – not unless you want to turn the whole state into a prison.

Imprisoned minds, imprisoned bodies. Socialists do not build walls to keep people out – but to keep them in. As someone who was arrested crossing the border to the Free World, strip-searched, cross-interrogated while machine guns were pointed at me in cross-lights of two lamps in an underground bunker by two KGB super-rats, subsequently jailed and publicly reprimanded, I have stories to tell…

Recently, I have been scornfully asked by a “Bernie” supporter who accidentally crossed my path: “What do you base it on? Yourself? Ha-ha!” Well, yes, my experience. What more do you want than the experience of someone who knows, who has been there? If you will not read the Animal Farm, 1984, Hayek and others… at least, pray to God, listen to someone who means well and knows better.

Socialism starts by instructing you what to say and when. You may not say anything against the Party. The next step is to make everybody belong to the Party, to “turn them.” Most will do it out of “free will,” because it will provide them with a more secure job, a position in a government agency or organization which depends on the system. Next, all opposition must be ridiculed and restricted, forced onto the Right Path. If they resist, they will suffer under the pressure of government Agencies: properties over $1mil must belong to the State or some larger cooperative under the state, taxes on everything which endangers the Party, for instance guns, corporate mergers, foreign imports which undermine “domestic” companies (those in close cahoots with the Party). You see, underground economy, bribes and corruption will be all that is left from free market under socialism…

The greatest paradox is that people will follow the idealist panderer to the grave – and beyond – with hope and trust that they are doing it to better humankind and make everyone better off, somehow more equal and fair and just… They call it “social justice,” but it is, in fact, “socialist justice.” In capitalism, people give freely for charitable causes which the market (market is people) determines worthy of support. In socialism, government gives equally to all causes it deems politically expedient. In capitalism, you may achieve true greatness, which is reflected by the appreciation of other people in your income and living standard. In socialism, only the Party is great; individuals have the same “equal” “social” value, thus they all deserve the same and will be allotted the same.

When Sanders calls for taxing Wall Street and that “Wall Street” will pay for everything – and his supporters blindly repeat it – they do not pause to think: What is Wall Street? A street? A corporation? What is it? Wall Street is a figure of speech, which refers to all US financial markets, similar to when we say Hollywood and we refer to the film industry. When Sanders says “Wall Street will pay for your college,” he is saying “U.S. financial markets will pay.” This means the free market economy will be taxed – every transaction on every good, every stock purchase or sale. Your parents and family who own stocks will own nothing, because it will all be “used by the government.” The goods will have to be more expensive because all companies will be taxed not twice (currently 40%) but three times: the government will determine the “final tax” or “value added tax” – the value? You may get something in the end, if you still want to go to college. But why would you, if everyone is paid the same and your job is secured – because everything is in some way tied to the Party and the Government? Go back to your gray house and be happy in your gray existence, you, gray mouse of socialism!

I am not making this up. I have been there before – and I ain’t going back!

Daniel Greenfield: It's Time for a Palestinian State