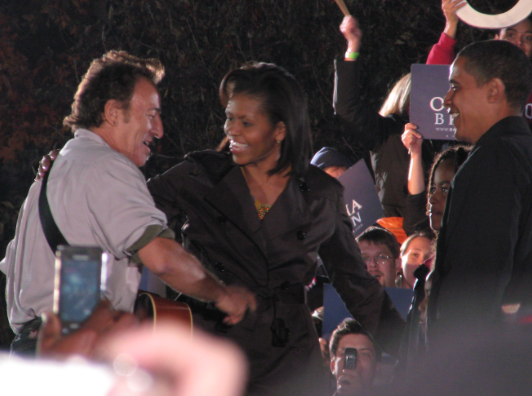 When Bruce Springsteen cancelled his concert in North Carolina this month because of politics, I thought “what a jerk.” He wanted to send a message, and he wasn’t concerned that his cancellation affected far more people than the issue he claimed to be protesting. It was about a new law in the state which restricted men’s bathrooms to males, and women’s bathrooms to females. My god, the nerve of those Carolinians!

The “Boss,” or some PR flake of his, explained: “To my mind, it’s an attempt by people who cannot stand the progress our country has made in recognizing the human rights of all of our citizens to overturn that progress.”

It is an misleading statement on so many levels—but it is one that defines the liberal mind so well. I will start with my favorite issue of the liberal faction: their claiming various rights that are not in the Constitution—while ignoring (or abdicating through unhinged courts) ratified, solid constitutional rights that are still on the books.

Let us step back in history. The convention of 1787 provided a Constitution that did not have a bill of rights. Some of our founding fathers wanted it that way, believing that their new design of government would stay “limited” on its own.Their optimism was due to the citizens of that day, who were educated enough to understand government abuse and fought it—instead of embracing it, like most of the voters today.

So in the debates leading to ratification, within Federalist #84, Alexander Hamilton penned [emphasis mine]:

“I go further, and affirm that bills of rights, in the sense and to the extent in which they are contended for, are not only unnecessary in the proposed Constitution, but would even be dangerous. They would contain various exceptions to powers not granted; and, on this very account, would afford a colorable pretext to claim more than were granted.“

Springsteen is doing exactly what Hamilton warned of: claiming rights that were not granted by our Constitution. At the same time he is reducing those believers of traditional family values to persons who “cannot stand the progress our country has made.”

The “progress” he alludes to is the gains that homosexuals, transgenders, lesbians and bisexuals have made in accessing the children of traditional families. Why is Springsteen taking this path? Has the rock & roll lifestyle given him experiences that has brought him to favor these characters over the traditional roles? Darned if I know; but I do know that actions speak louder than words. Party on, Bruce!

Actually, Springsteen’s protest is in line with his politics. He’s a supporter of our current president, the one who lit the White House in rainbow colored celebration of a SCOTUS decision; and the list of Springsteen’s promoting gay powers (not “rights,” mind you) yields a google search consisting of many pages. That is Bruce and his desires. But the downside of Springsteen’s views is his intolerance of those who disagree with him. He shares this intolerance of conservative views with all liberals.

For years I have written about the typical liberal mindset as “intolerance masquerading as tolerance.” A disagreement with a liberal means engaging in a political dialogue where logic is absent. They debate with half-truths and mischaracterizations. They change words to avoid a direct reference to the truth. Homosexual has been changed to “gay.” If you disagree with them, they claim that you have an irrational fear of their opinions, that you have a phobia, instead of the actual disagreement. Then we have their “stupid” or “racist” cards that are thrown out when they’re losing the argument.

Their stubbornness is designed to avoid socratic discourse, so the party survives despite all the evidence against it.

Liberalism is pro-family. But liberalism is pro-political family, not traditional family. Traditional values hold that you do not subject your children to the horrible debt that is necessary for the preservation of today’s liberalism. Today’s liberal cult is waging a horrible act of fiscal child abuse (another of my favorite terms) on our future generations, without caring about them. Hey, kid! I’ll be dead before you have to pay MY bills! It works for me!

Remember, the liberal faction re-elected a president who has now doubled our national debt in just six years. It is important to acknowledge that despite the words and excuses that are endlessly tendered by the liberal faction, actions speak louder than words. Their political family cannot survive without running the nation into horrible debt.

This is Bruce Springsteen’s family.

I must confess that I liked Springsteen’s earlier works, the ones he made before he started using reverb. I still listen to The Wild, the Innocent and the E-Street Shuffle and the Asbury Park albums. Back then he was a true artist; he has since changed to an entertainer. He brings in the bucks and people make money from his concerts, when he allows it. Good for you, Bruce. But I believe that family comes first.

Meanwhile, there is an answer to the public bathroom dilemma. A couple of years ago I dined at a restaurant in downtown Phoenix. Each toilet was in a small, separate room—with no gender assigned. In each room was a mirror, for primping and inspection. But the coolest feature of this design was that the wash basins were on the outside of the rooms, where everybody in the restaurant could see if you washed your hands or not. As a result, the restaurant’s patrons have clean hands and the children are safe.

The restroom design is a good idea that bypasses the attorneys and the liberal faction’s protesters. It’s so good that you may see this design in every town where Bruce holds his concerts.