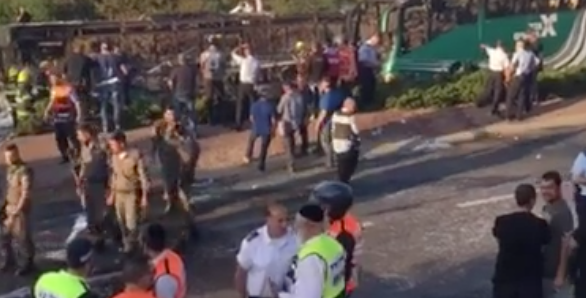 There was a terror attack Monday in Jerusalem. A bus exploded which damaged another bus and car injuring about 20 people. The cowardly tactic that Hamas used was putting a bomb in an empty bus then igniting the bomb near other vehicles. There hasn’t been an attack like that since 2005. Full report here

This incident has officially been declared a terror attack by the head of the Israeli police and Hamas claims responsibility. Our Leaders continue to allow the injustice from the United Nations Security Council led by Ben Ki Moon, continuing to demonize Israel and the Jewish people

The UN also justifies the terror attacks that are caused by radical Islamic extremist. Our leadership continues to work with an American administration that also forces our Military to tie their hands behind their back in properly defending the people of Israel.

It is obvious that Hamas is planning a big attack with numerous terror tunnels being found including many terror attacks on the rise. The Knessset argues back and forth putting the blame on one another why these attacks continue to happen instead of actually doing something about it.