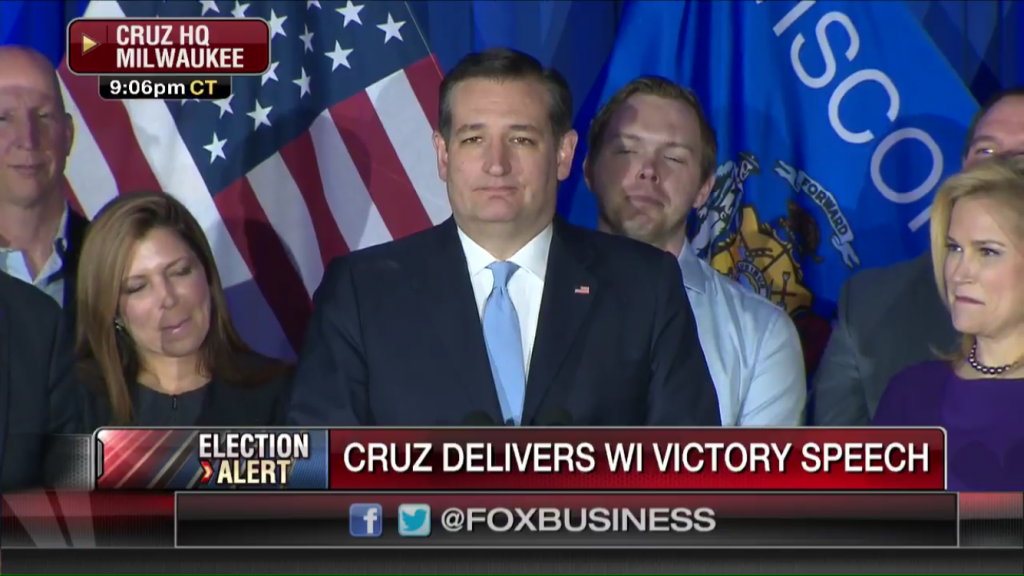 Texas Senator Ted Cruz boosted his big win in the Wisconsin primary, complicating the front-runner Donald Trump the chance from securing the nomination sooner and assuring heated primaries will continue on until July’s GOP convention.

“Tonight is a turning point,” Texas Sen. Cruz told his supporters at a victory party in Milwaukee, Wisconsin. “Tonight, Wisconsin has lit a candle guiding the way forward. Tonight, we once again have hope for the future. Tonight is about unity and tonight is about hope.”

With 99% of the precincts reporting as of 1:40 PM Eastern, Cruz received 48.4% of the votes to 35% for Trump. Ohio Governor John Kasich was in a distant third with 14%. With 42 delegates at stake in Wisconsin in a winner-take-most primary, Cruz has so far secured 18 delegates from Tuesday’s win, while the other 24 delegates will be divided based on the winner of each of the eight Wisconsin congressional districts. The win from Cruz in Wisconsin won’t alter the delegate count, but will now increase the possibility of a contested convention battle come July.

“As a result of tonight, I am more and more convinced that our campaign is going to earn the 1237 delegates needed to win the Republican nomination,” Cruz said. “Either before Cleveland or at the convention in Cleveland, together we will win a majority of the delegates and together, we will beat Hillary Clinton in November.”

Speaking to an enthusiastic crowd of supporters, Cruz stressed the importance of uniting the Republican party, arguing his campaign has created a unified force, paving the way for a “turning point” based off his victory that he considers a “rallying cry” for preventing Trump a win.

Touting his recent victories in North Dakota and Colorado, the two states that decides the winner based on a selection of delegates instead of holding a primary and his victory in Utah two weeks ago, Cruz argued these four victories are evidence “the national political terrain” is changing. “Four very different states — Utah, Colorado, North Dakota, Wisconsin — four victories,” Cruz said. He also added his victory on Tuesday helped his campaign raise $2 million, a portion Cruz is definitely going to need to use to campaign intensely in a very pricey New York.

Cruz’s campaign invested heavily in the Badger state, capitalizing on Trump’s comments about women to build an extensive “Women for Cruz” coalition. Among those in part of the coalition included his wife, Heidi, his mother, Governor Scott Walker wife, Tonette, and former GOP contender Carly Fiorina, all who helped campaign aggressively for Cruz this past week before the primary.

Standing alongside Cruz as he was addressing the crowd was his wife Heidi in which Cruz took an opportunity to give her a shout out. “I may be biased, but isn’t [Heidi] going to make an amazing First Lady?” Cruz asked the crowd, as the crowd broke into cheers and loud applauds. “Every day she’s teaching our daughters, Caroline and Catherine that strong women can accomplish anything in the United States of America.”

Multiple news outlets projected Cruz the winner after the polls closed. Cruz proclaimed that he defied the odds against him in a state the media declared Trump the winner three weeks ago. However, the media never foresaw Trump having a rough week due to his series of recent stumbles during the campaign trail that hurt him more than helped his chances to win Wisconsin.

“Three weeks ago the media said Wisconsin was a perfect state for Donald Trump,” Cruz said to raucous cheers. “But the hard-working men and women of Wisconsin stood and campaigned tirelessly to make sure that tonight was a victory for every American.”

The front-runner tried to salvage a win and turn the focus away from his missteps to an issue that has paved a way for Trump to secure the lead for months: illegal immigration. Trump outlined his proposal plan on several ways he would compel Mexico to pay for the wall.

Another problem Trump faced in Wisconsin was the numerous attacks from Republican leaders along with influential conservative media pundits like Charlie Skyes, all who are a part of the anti-Trump movement. Super PACs spent millions in Wisconsin ads helped in the efforts to derail the front-runner by moving Republican voters to vote against Trump.

Trump didn’t hold an election night press conference like he has done in past primaries, but his campaign issued a statement in regards to Cruz winning Wisconsin.

“Donald J. Trump withstood the onslaught of the establishment yet again,” according to the statement. “Lyin’ Ted Cruz had the Governor of Wisconsin, many conservative talk radio show hosts, and the entire party apparatus behind him. Not only was he propelled by the anti-Trump Super PAC’s spending countless millions of dollars on false advertising against Mr. Trump, but he was coordinating `with his own Super PAC’s (which is illegal) who totally control him. Ted Cruz is worse than a puppet — he is a Trojan horse, being used by the party bosses attempting to steal the nomination from Mr. Trump. We have total confidence that Mr. Trump will go on to win in New York, where he holds a substantial lead in all the polls, and beyond. Mr. Trump is the only candidate who can secure the delegates needed to win the Republican nomination and ultimately defeat Hillary Clinton, or whomever is the Democratic nominee, in order to Make America Great Again.”

Heading to New York with it’s primary coming up in two weeks, Cruz faces a difficult task in stopping Trump in his home territory. Trump is favorite to win New York April 19 primary by over 50% according to the latest polls with some polls show Cruz trailing behind Kasich. With 95 delegates at stake, which are allotted proportionately by congressional district, the winner must attain 50% to win the three delegates in each of the 27 districts. If no candidate receives 50% in a district, the delegates are awarded two per first-place winner with second place finisher receiving one of the delegates. With Kasich still in the race, refusing to leave, his presence can provide a major complication for Cruz to obtain a win or any delegates from any of the district.

“So let me just say, Hillary, get ready, here we come,” Cruz said.