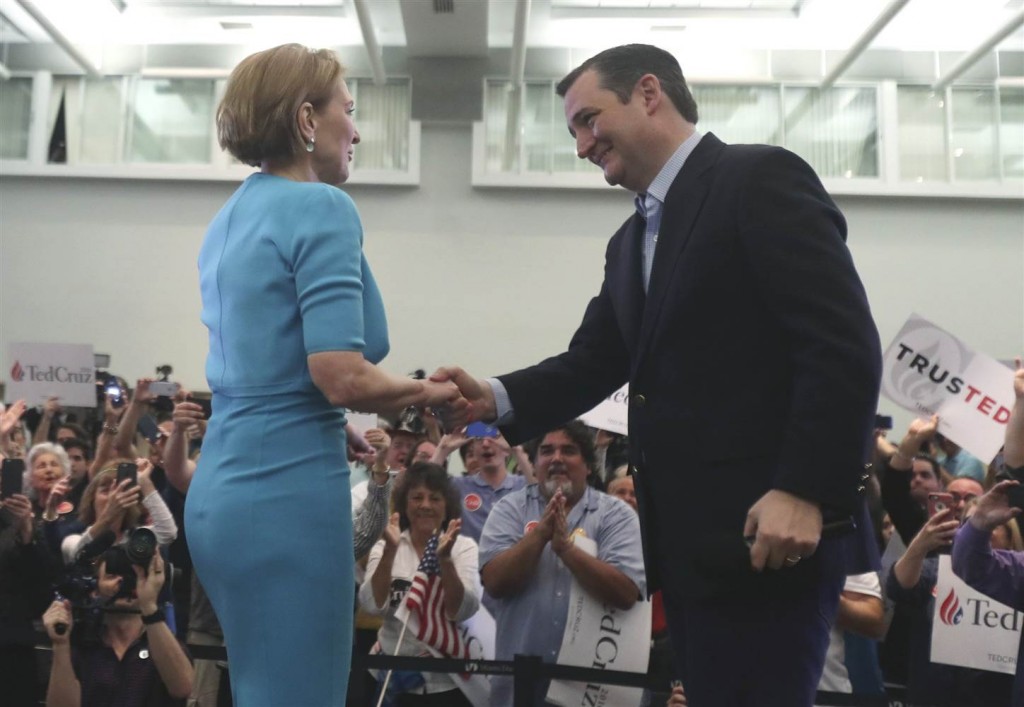 After days of speculation, Senator Ted Cruz will announce today at his afternoon rally in Indianapolis, Indiana that he has chosen former GOP rival Carly Fiorina to be his running mate should he manage to win the Republican nomination, according to a close source familiar with the plan.

The move comes a day after GOP front-runner Donald Trump swept all five north eastern state primaries, ultimately declaring himself the presumptive GOP nominee. Cruz is hoping to gain momentum in the Hoosier State which votes next Tuesday to stop Trump short of securing the 1,237 threshold needed to win the nomination and keep alive the hopes of a contested convention.

The last time a candidate announced a VP selection this early before securing the nomination was in 1976 when Ronald Reagan picked Senator Richard Schweiker of Pennsylvania on the eve of the GOP convention. This risky move ultimately backfired when Mississippi delegates swung the nomination to Ford, a revolt from the conservative base for Reagan choosing a liberal Republican. The move for Cruz  can foreshadow a make or break for his presidential candidacy, depending on the results of next week’s primary in Indiana.

Fiorina, who dropped out of the presidential race in February after poor showing in both Iowa and New Hampshire endorsed Cruz after the Super Tuesday primaries. Becoming his top surrogate out of the five former GOP presidential contenders, Fiorina spent her time on the trail for Cruz criticizing both Trump and Democratic front-runner Hillary Clinton, a strength that can help boost Cruz’s appeal among female voters in the remaining 10 upcoming primaries especially in California. In 2010, Fiorina ran for Senate in California, but lost to the incumbent Democrat Barbara Boxer by 10 points. However, with GOP primary voters, Fiorina won 56% of the vote, something that can help Cruz in his efforts in winning the state’s most crucial June 7 primary.

However, at the same time picking Fiorina can be a negative for Cruz due to her controversy business record as CEO of Hewitt Packard, something Trump used against Fiorina during her short lived presidential bid. During her 2010 Senate bid, Boxer focused heavily on criticizing Fiorina leadership of HP which helped the Democrat effectively win the seat.

Earlier this morning on ABC’s “Good Morning America,” Trump called the move a waste of time that won’t “do the trick” when asked about Fiorina being a potential running mate for Cruz. “Frankly, he’s wasting his time because he won’t be the nominee,” Trump said. “If you’ll remember we had so many — we had so many candidates ahead of us on that stage but she had the one good debate. She went up, then she dropped like a rock and never resonated with the people. So, I mean, Carly is not going to do the trick,”

Trump added, “I like Carly. Nice person but she never resonated. She didn’t do well. She went — she was very low in the polls and by the end she was an insignificant player.”

Daniel Greenfield: The Fallacy of Focusing on Islamic Radicalization