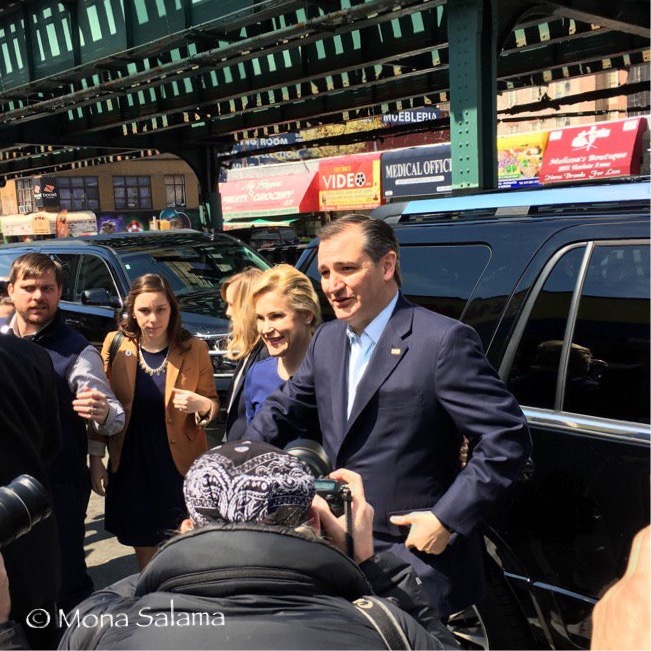 Bronx, NY. — Fresh off his resounding victory in the Wisconsin primary, Texas Senator Ted Cruz decided to take a victory lap in an area that is considered to be one of the most Democratic area of the nation — South Bronx.

“The Bronx is America and I’m thrilled to be back here in New York,” Cruz said to reporters before meeting with a dozen faith leaders.

It’s been forty years since the state of New York plays a pivotal role in the presidential primaries. As the race heads to the Northeast section, GOP contenders are looking to score the biggest prize after March Madness, 95 delegates in a proportional winner-take-most contest. However, Cruz faces an uphill battle to win in Donald Trump’s home territory, but he states he is focusing on winning delegates in individual congressional district, specifically in upstate New York.

Cruz’s visit to the Bronx was primarily to meet with prominent group of Black and Latino pastors, some of those registered Democrats, but can help Cruz garnish New York evangelical Republican voters due to his social conservative viewpoints. Organized by Bronx State Senator Ruben Diaz Sr, a Democrat with social conservative platform and a pastor said he believes Cruz represents the values he represents.

“We are conservative,” Diaz said. “We are religious people. We believe what we believe. People try to put us down. The values there are two different values.”

However, Diaz son, Bronx Borough President Ruben Diaz Jr, held an event the same time for Democratic front-runner Hillary Clinton on the other side of the Bronx. Diaz Jr, a socially liberal Democrat denounced Cruz visiting his district, but stopped short of criticizing his father for organizing the event. “Ted Cruz is a hypocrite,” Diaz Jr. said. “He not only offended New Yorkers, he offended Bronxites, and now he’s here today in New York and in the Bronx looking for money and votes.”

Cruz’s time was met with hecklers as he arrived in the Chinese-Latino restaurant in the Soundview section of the Bronx. “Ted Cruz has no business being in the Bronx,” the young demonstrator who goes by the name “Rebel Diaz”. “This is an immigrant community. We deal with climate change every single day, and he wants to say it doesn’t exist. We are one of the poorest congressional in the country, and to receive this right-wing bigot is an insult to our whole community.”

However, as Cruz was in the back room of Sabrosura 2 restaurant, a few dozen supporters came in attendance waiting to meet their candidate after the private luncheon. When asked by PolitiChicks if they think their candidate has a shot to win some delegates in New York and if his views are anti-immigrant, one supporter defended Cruz.

“[Cruz] is not for illegal immigration,” Lisa Stewart, a Cruz supporter from Manhattan told PolitiChicks. “Cruz is for immigration, but they have to come here legally and follow the laws.”

In regards to Cruz’s rival Donald Trump, Stewart cited reasons why she doesn’t support the number one GOP contender and the main reason she likes Cruz is because he is a strong constitutional conservative who sticks by his principle. “Trump flip-flops his views to cater to the crowd, Cruz doesn’t,” Stewart added. “Cruz is firm on his policies and those policies are conservative that will benefit all Americans, not only to a certain crowd who Trump is catering to.”

A few Jewish supporters hiked from Brooklyn to attend the Bronx event. They told PolitiChicks they support Cruz over Trump because of his pro-Israel stance and his conservative values, in which they stated is “disappearing” and leading to a decaying society. 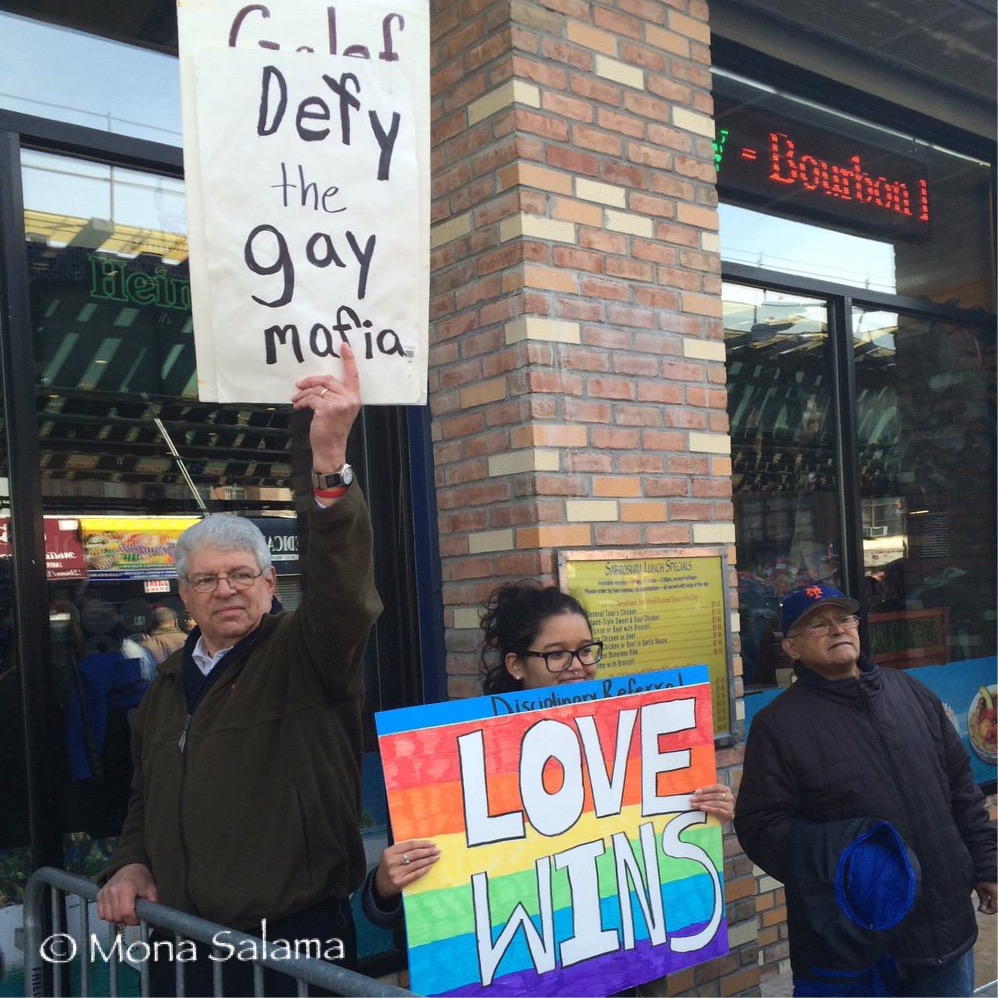 Outside the restaurant, more protestors stood outside holding signs decrying issues of gay rights to immigration, as well as Cruz “birther” issue. One man shouted at Cruz as he was leaving the restaurant that he isn’t eligible to become president because he wasn’t born in the United States. “You can’t ignore Mr. Cruz,” the protester shouted. “You got to be born in America to become president. You can’t ignore it Mr. Cruz, it’s in the Constitution.”

One student, Destiny Domeneck, who attends the Bronx Lighthouse College Prep Academy, the school Cruz was originally scheduled to attend, but was cancelled last minute, was one of the protestors outside protesting Cruz’s appearance to the Bronx. Talking to reporters outside, Destiny spoke about her skipping class to protest Cruz being in the Bronx and how her and other students told their principal to cancel his appearance to her high school. The students of the charter high school drafted a letter to their principal threatening to walkout from Cruz’s scheduled speech about education.

In the letter obtained by PolitiChicks, it called Cruz a “misogynistic, homophobic and racist,” and his presence goes “against everything our school stands for.” The students said they would “leaving during 4th period as an act of civil disobedience” if Cruz spoke at the school because “most of the students are immigrants or come from immigrant backgrounds.” The principal of the charter high school agreed with the students who were scared to hear a conservative viewpoint, which prompted the principal to cancel the visit.

“I’d like to commend you and the other student for your commitment to your beliefs and values,” the principal Alix Duggins said, replying to the letter. “Your points are eloquently argued that I believe that I would not have been able to get the visit cancelled without your actions.”

A group of students will be leaving during 4th period, as act of civil disobedience in regards to the arrival of Ted Cruz to BLCPA. We have all considered the consequences of our actions and are willing to accept them. We respect you and all the staff at BLCPA as well as the expected guests. But we want you to understand that as passionate students, we have ideas and principles that should be heard and respected. This walk out isn’t a reflection of our discontent with BLCPA but our opportunity to stand up for our community and future. This walk out is taking place because we as students all share a common idea.

The presence of Ted Cruz and the ideas he stands for are offensive. His views are against ours and are actively working to harm us, our community, and the people we love. He is misogynistic, homophobic, and racist. He has used vulgar language, gestures, and profanity directed at a scholar and staff members, along with harassing and posing threats to staff and scholars according to the Disciplinary Referral slip. This is not to be taken kiddingly or as a joke. We are students who feel the need and right to not be passive to such disrespect.

After the lunch meeting, Cruz held a press conference with reporters discussing his primary win in Wisconsin, his comments from January of “New York Values” and to criticize New York City Mayor Bill de Blasio.

Cruz added, “Donald has no solutions to the problems we are facing. He likes to yell and scream and insult. My top priority as president will be bringing jobs back to America.”

On Mayor de Blasio, Cruz criticized him for his liberal policies catering to teachers union to try to close charter schools and defending criminals over the NYPD.

“Every time there is a confrontation between criminals and police officers, the liberal Democrats side with the criminals and the looters and the rioters rather than the police officers,” Cruz said. “I’ll tell you the moment when the brave men and women in blue of the NYPD stood up and turned their backs on Mayor Bill de Blasio I stood up and cheered those cops and I’ll tell you people all across America did.”

With 95 delegates up for grabs in New York, polls show Trump has a double-digit lead over Cruz and Ohio Gov. John Kasich. A recent poll released yesterday by Monmouth shows Cruz now in third place with 17% with Trump having a commanding lead of 52%. Cruz isn’t conceding to New York just yet, sounding optimistic in hopes to well in the Empire state to prevent Trump from securing enough delegates to obtain the GOP nomination.

“The interesting thing about polling is that it can change and it can change quickly,” Cruz said. “Three weeks ago in Wisconsin we were down and yesterday we won a landslide victory by 13 points, sweeping the state.”