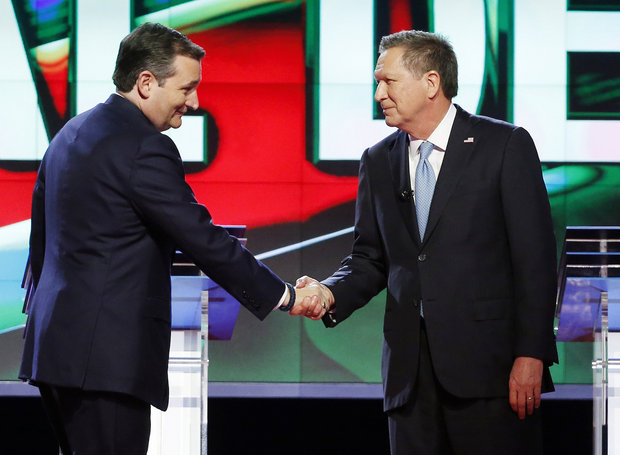 In a pair of campaign coordinated statement announced Sunday night, Cruz and Kasich campaigns outlined their plans where each candidate would concentrate their resources in three upcoming individual states. Cruz would focus his efforts in Indiana while Kasich would put his efforts towards Oregon and New Mexico as means to fight the fight for a contested convention in July in preparation for a second ballot to stop Trump.

“Having Donald Trump at the top of the ticket in November would be a sure disaster for Republicans, ” Cruz’s campaign issued statement stated. “Not only would Trump get blown out by Clinton or Sanders, but having him as our nominee would set the party back a generation. To ensure that we nominate a Republican who can unify the Republican Party and win in November, our campaign will focus its time and resources in Indiana and in turn clear the path for Gov. Kasich to compete in Oregon and New Mexico, and we would hope that allies of both campaigns would follow our lead.”

“Donald Trump doesn’t have the support of a majority of Republicans – not even close, but he currently does have almost half the delegates because he’s benefited from the existing primary system,” Kasich campaign statement said. “Due to the fact that the Indiana primary is winner-take-all statewide and by congressional district, keeping Trump from winning a plurality in Indiana is critical to keeping him under 1237 bound delegates before Cleveland. We are very comfortable with our delegate position in Indiana already, and given the current dynamics of the primary there, we will shift our campaign’s resources West and give the Cruz campaign a clear path in Indiana.”

In response, the Trump campaign issued a statement an hour after the two campaign joined forces saying the tag-team duo is a political move to stop the only person capable of getting the nomination. “It is sad that two grown politicians have to collude against one person who has only been a politician for ten months in order to try and stop that person from getting the Republican nomination,” Trump’s statement said. “Senator Cruz has done very poorly and after his New York performance, which was a total disaster, he is in free fall and as everyone has seen, he does not react well under pressure. Governor Kasich, who has only won 1 state out of 41, in other words, he is 1 for 41 and he is not even doing as well as other candidates who could have stubbornly stayed in the race like him but chose not to do so.”

Trump added, “This horrible act of desperation, from two campaigns who have totally failed, makes me even more determined, for the good of the Republican Party and our country, to prevail!”

With Indiana primary on May 3 with 30 delegates are up for grab in a winner-take-all statewide, Trump has a narrow lead ahead of Cruz, 40%-35%, according to the latest polls from CBS News with Kasich in a distant third with 20%. An internal poll showed Kasich remaining competitive in Indiana divides the anti-Trump vote, causing a major drawback for Cruz to win the state. Since Indiana primary is winner-take-all statewide and proportionally divided by congressional district, Kasich strategist John Weaver stated keeping Trump from winning a “plurality in Indiana is critical to keeping him under 1,237 bound delegates before Cleveland,” is the cause to shift its “campaign resources west” to give Cruz campaign a clear path to victory and to stop Trump.

In June, both New Mexico and Oregon hold their primaries. New Mexico offers 24 delegates while Oregon offers 28 with both states awarding their delegates proportionally.

After Indiana, Oregon and New Mexico primaries, both campaigns stated they will resume in  their competition. The divide and conquer strategy against Trump was a work in process from Kasich’s camp working to get Cruz on board. Weeks after the Ohio and Florida primaries that occurred a month ago, both camps sought the need to work together before the New York primary to deny Trump a first-ballot win at the convention. With the front-runner winning primaries state after state, Cruz focused more on a delegation strategy as means to pick off support away from Trump and to gain enough delegates ahead of July.

The announced public statement from both campaigns after a month long coordination could be happening a little too late as Trump is closing in on the number of delegates he needs to win the nomination. Trump is the only candidate remaining who is mathematically capable to clinch the nomination. After winning the New York Primary last Tuesday, Trump needs 390 delegates out of the 733 delegates available, according to the AP delegate count. Cruz, however is behind Trump in the 286 delegate count, but is well ahead of Kasich who only has 186 delegates. With both currently lag well behind Trump they have acknowledged that at this point, the only best shot at beating the front-runner would come at a contested convention.

According to the convention rules, delegates are bound to vote for the candidate who won their state’s primary or caucus on the first ballot. However, going forward if one candidate fails to meet the 1,237 threshold, delegates are free to vote their conscience, thus giving both Cruz or Kasich a chance to win the magic number to win the nomination.

The deal between the two campaigns came 36 hours before the opening of the polls in the so-called Acela Primary composed of five North East states. Trump is expected to dominate in these states and both Cruz and Kasich are likely to be shut out in the bound delegate of at least three of the states holding contests on Tuesday.