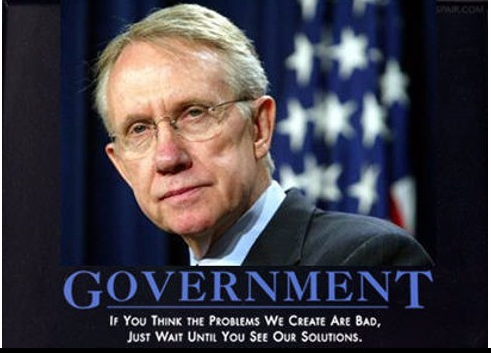 Senator Harry Reid (D), the US Senate minority leader, has been blocking a bill, S.579, to allow Federal Inspector Generals to access all records and employees of Federal Agencies in IG inspections and audits. This is the same Senator involved in bad land deals in Nevada and who blocked many Senate bills from being voted on.

Due to Reid’s efforts to block S.579, the watchdog group Citizens Against Government Waste (CAGW), named Reid as “Porker of the Month”.

As a former Internal Audit manager in Fortune 500 firms, and an anti-corruption manager in Iraq, I fully believe that Inspector Generals should have full independence and have full access to all records and employees of the agency under their jurisdiction. Reid’s actions are a flagrant disregard for proper transparency needed over government activities.

But Sen. Chuck Grassley has still been pushing the bill, S.579, that would mandate transparency and openess for IG activities, even with Reid blocking the bill for 5 months. So a Las Vegas newspaper wrote a story about it on Mar. 27, and here is a 15 minute video by Grassley explaining all of it. If you wondered why IG’s were not able to get access to Federal records, here is the dirty Democrat story why…

Here is the original story about how the Citizens Againsts Government Waste (CGW) announced that Senator Reid was “Porker of the Month” for holding up S.579.

Watch the above 15 minute video and read the articles. Then if you agree, contact your U.S. Senator and ask them to support Grassley and pass S.579 to improve Inspector General powers.

Vance Jochim is a retired Internal Audit Manager who worked at several California large organizations including Nissan Motor Corp, ARCO the oil company (now part of BP), a concrete materials company now part of Cemex, a software company, and the County of Los Angeles. At one time, Jochim was President of the still existing Rush Limbaugh club in Orange County, California. He also was a US Federal contractor helping set up an Iraqi anti-corruption agency in Baghdad in 2004-2006 and in Afghanistan (2009) before retiring to Lake County, Florida. He moved from Orange County, California to escape the California liberals. Jochim is a retired (inactive) Certified Internal Auditor (CIA), a Certified Information Systems Auditor (CISA), a Certified Fraud Examiner (CFE) and also has an MBA from Pepperdine University based in Malibu, California. He specialized in directing operational or performance audits leading to million dollar improvements in corporate or government budgets or profits. In 2006, Jochim founded and still runs the local Lake County, FL watchdog blog FiscalRangers.com and has attended Lake County School Board meetings and Board meetings of the Lake County Board of Commissioners over the last 8 years. He makes videos of many local political events including election candidate forums, and is an active member of the North Lake Tea Party. The focus of FiscalRangers.com is to cover local government agencies and describe fiscal issues and fiscal fiascos resulting from local government operations and recommend process changes to reduce repetition of the fiascos. Jochim also created the "FiscalRangers" Facebook page, the YouTube Channel “FiscalRangersFlorida” and he is also on LinkedIn.com. FiscalRangers.com [email protected]