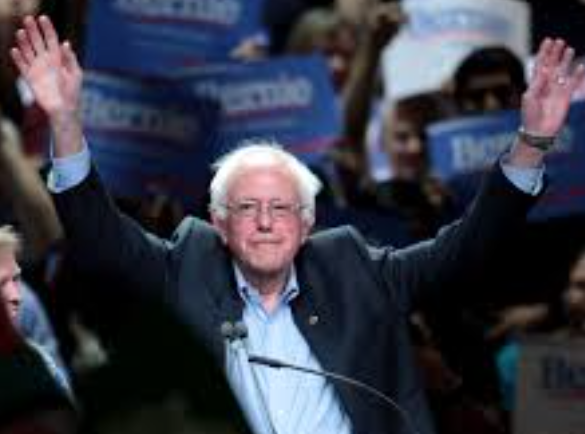 Nearly half a century ago, Senator Sanders started his political career by running for governor and senator. Being a member of the Socialist Party of America (famously going on his honeymoon to communist Russia), he ran as an independent – and failed. The Democrat Party was too “right wing” for him at the time. It took him another ten years before he became a representative and then congressman. He is the founder of the Congressional Progressive Caucus. He is also an old white man, someone Democrats do not generally tout as a paragon of modern progressive integration and diversity. The ideas he touts are stronger than his “white privilege.”

Why is Sanders popular? Like all communists before him, he is promising: 1) free college, 2) Wall Street taxed to death, 3) redistribution from “the rich” to “the poor,” 4) living wage, Paycheck Act etc., 4) “decent paying jobs…” I have taken these straight from his website. Of course, as a child of capitalism who perhaps saw how socialism “works” only during his 2-weeks’ Russian honeymoon, he knows little what he is talking about….

Many of these items are no doubt attractive and seemingly sensible. For example, his plan to reverse NAFTA and “bring jobs back from China” sounds very much like what Donald Trump proposes. However, the underlying rationale is not our competitiveness, but that U.S. progressives and socialists should unite with those in China (a-la Marx’ motto “Proletariat of the World Unite!”) and bring wages up on the same level. Only then would our manufacturers be “allowed” to move to China – that is provided that they manufacture under the same conditions as here in the United States and pay the Chinese workers the same wages.

Everything in Sanders’ platform is the rehash of communist mottoes from my past. Yes, we had schools for free, college for free, doctors for free. We also had one of each – one government allotted doctor, one public school we had to go to (children of non-Party member parents could not go to college at all) and all teachers were paid exactly the same. There were “Pay Scales” – basically tables determining the pay for everybody depending solely on seniority. When a doctor, teacher, attorney, shop assistant began to work (started their employment), they were Grade 1, let us say $1000/week. No matter how hard or little they worked, they would still get paid the same. Unless they committed a crime or spoke against the regime, they would keep their job till they died. Five years later, they would “graduate” to Grade 2, $1,200/week. Everybody knew everybody else’s wages…

There was no “housing discrimination” because everybody lived in government allotted apartments: paneled houses of up to 12 floors with maximum 4 rooms and one bathroom. Of course, if someone belonged among the class of “Party Functionaries” (basically politicians), they would have a private house (and, in some cases, could even travel abroad to the West!). Parents had to put their children to a state kindergarten and had to have them inoculated and monitored by state-allotted doctors. If someone was “hyperactive” (manic or in some other way “different”), they would be taken away to the “school for dements” usually attended only by the gypsies. This was rare but did happen. Interestingly, as extremely gifted children often misbehave and defy rules, small geniuses would sometimes end up sharing desks with demented or criminal children, being taught from books several grades below their age and mental capacity. MENSA? MENSA, like the Church, was forbidden. The only God and Genius was the State and Party.

Interestingly, as socialists often pride themselves on “social inclusion” and diversification, I must point out that the ultimate goal of all socialists is total subjugation and “unity” – differences and individuals exceeding “the norm” are punished. For example, gypsies refused to be subjected to the rules and refused to send their children to public schools. As a result, there were “special schools” made for them and police would enforce attendance. Where even this failed, the State took subsidies away from gypsy families. As the gypsies used to have 7-10 children and the parents received money from the State for each child, they literally lived off the state child support income.

Socialism is a system with built-in poverty, where no-one tries harder because if they do, everything they make above what the government allows them to have (which is the same as everyone else), will be taken away and “redistributed.” Taxing Wall Street and redistribution of wealth are merely pretty veils behind which cannons and machine guns stand, pointed at capitalism. Anyone who tries harder and makes more than someone else must be done away with, because this diminishes the average worker who may not be as hard-working or “gifted.”

The greatest paradox and sadness follows, because this system is so unnatural to a human being: we all desire privacy and personal property. We all have different needs. A society built on the equality of needs is doomed to failure! Those who take others’ property will always want to possess it themselves. The Party Class develops even as the workers believe and trust and follow their populist demagogue.

The Party Class will make up nearly one third of the population, perhaps less, but you will never know – because you may never reveal that you are not one of “them.” The enterprising type (about one third of all population) will establish an underground economy. Everything for which the State did not plan or of which the state monopoly has not taken care of, will be available on the black market – usually for some foreign currency, Yen, Euro… because ours will have devalued and the goods we desire will be available only abroad, in countries with free market capitalist economies.

The last third of the people will be satisfied – not happy, but satisfied. After all, they are the “working class” people. They could not be bothered to study at a university just to get the same wages they get as a cleaning lady, shop assistant or garbage collector. In socialism, money is not the motivator (motive or motivating force) but the ultimate equalizer. What is more, this New Left working class will feel elevated because, after all, they will also live in the same apartment as a doctor or a lawyer, having the same brand monopoly-produced socialist TV set, watching the same government-approved news and programs, driving the same government-produced and subsidized “green car…” They will all have sufficient alcohol, cigarettes and very unhealthy but satisfying diet. They will be able to go on a paid vacation to the Party seaside resort twice a year, and stay at home for two weeks a year on a paid sick leave. They had better be sick too, because if you do not take your leave or vacation as mandated, you are going to lose it! The doctor will be for free too, as Senator Sanders promised, although you will have to wait in line for several hours and the medicine you need will not be available because it is made only in Switzerland and is available only on the black market. Even if you could get it, you will not be able to pay for it… All in all, you will be able to get whatever government approves and recommends: one of each, or none, as the Party determines you and your family needs – Common Core birth-to-death.