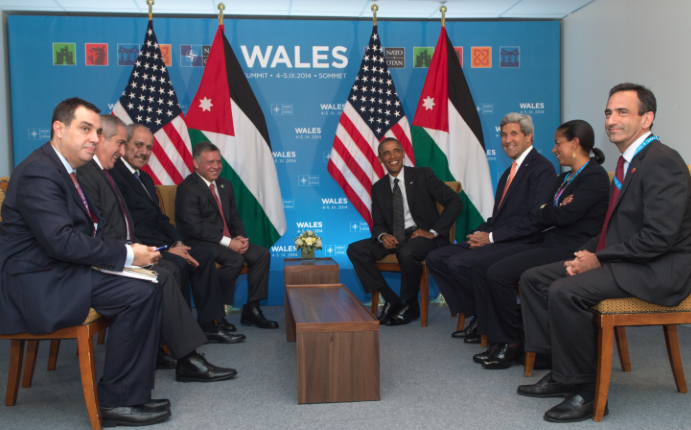 When President Obama speaks of the Middle East as being in a state of “Cold Peace,” he is being delusional. Even as we speak, people are actually dying as a result of his incompetence and weakness. The man who entered the White House as a man of peace and reconciliation has caused more suffering and death in the world than we have seen since Vietnam. What is more, his “peace-making” is founded on social engineering and making our army weak. More aircraft, ships, helicopters… have been decommissioned during Obama’s “reign” than during the terms of any of his predecessors since World War II. The number of our troops is at all time low. In fact, never since the end of World War II have we had so few troops!

Obama simply wants to keep his eyes closed to “see no evil,” much like a peacock sticking his head into a heap of sand. Meanwhile, Iran has been working hard to develop long range missiles and nuclear weapons, NORAD’s intercepts of Russian nuclear bombers are occurring with uncanny regularity, and Obama’s “red buttons” and lines in the sand mean less to the world than those of a child playing in a sandpit. Last September, China sent five warships into Alaskan waters while Obama was visiting Anchorage, speaking about “increasing and real danger to the world” – as a result of melting glaciers!

In Europe, Obama withdrew all tanks from our bases in Germany and severely cut our presence. His first step in the “Russian reset” (as Obama’s then Secretary of State Clinton termed it) was to abolish the first stage of our nuclear defense system in Poland and the Czech Republic. General Flynn stated that he has been “baffled” by his Commander-in-Chief’s actions. If anyone has the power to destroy the United States, it is Russia. Instead of leading, Obama is being led by the nose – and we have to follow him.

When Donald Trump opined about the futility of NATO and our engagements abroad, Obama responded that “Trump knows nothing about how the world works.” Really? If NATO had been under proper leadership, there would have been no Muslim invasion of Europe, Ukraine would not be under Russian threat today, Libya would not be flooded by radical Islamic thugs, and Iraq would have been a growing industrial western economy.

While NATO was founded in 1949 as a response to the threat posed by the Soviet Union, its function has always been global and as much economic as military, because the two are inseparable. It was under the leadership of the United States and with the aid provided through the US-funded Marshall Plan and other means that Europe was slowly stabilized after World War II. NATO’s Treaty Article 2 provides for non-military cooperation, and this article precedes all articles on military cooperation.

In turn, when Soviet Union integrated its satellites into Warsaw Pact in 1954, after West Germany joined NATO, this move was likewise made under the heading of economic cooperation within ComEcon (Council for Mutual Economic Cooperation) – a communist-directed international “market.” Today, thanks to Obama’s Iranian “deal,” China, Russia, and Iran, all ruled by totalitarian despots, are growing economically closer than ever before. It would not surprise anyone if they formed an Eastern Cooperation Union (or some such Leviathan) to the exclusion of all western democracies.

When Donald Trump criticizes NATO as “defunct” and non-functioning, he approaches the issue from a businessman’s point of view: if allies cannot provide for common defense, how can they provide for common trade? Interestingly, each time there was an actual threat, not only military but also economic cooperation among the allies increased: when the Russians touted their atomic bomb in 1949, after the outbreak of the Korean War in 1950, when Warsaw Pact forces invaded Hungary in 1956, with the Blockade of West Berlin and the construction of the wall in 1961, and even the suppression of the Spring of 1968 in Czechoslovakia – all these events brought the allies closer militarily as well as economically.

Indeed, European Union would have been impossible without NATO – and without American leadership! The events leading to the current EU all either closely precede or follow and trail the allies’ military challenges listed above: the Hague Conference (1948), founding of the European Coal and Steel Community (1952), European Economic Community (1957), Euratom (treaty on nuclear & atomic cooperation, 1958), the Merger Treaty (establishing “European Communities” in 1967), and the Maastricht Treaty in 1992 (foreseeing unification of the former communist bloc countries) have all been results of military crises and resulting cohesion of powers. It does not take a Kissinger to see that recent attacks on Brussels’ airport and subway at EU headquarters constitute an assault on EU as much as against NATO, which is often perceived as the capitalist threat in the Middle East and in all other countries ruled by dictators.

During the early 1960s, NATO adopted the strategic doctrine of “Massive Retaliation” if the Soviet Union attacked any of the Allied Powers – NATO would respond with nuclear weapons. This was the famous Doctrine of Deterrence, based on power, not words. Cold War, a standoff – sort of “separate but equal” peace – was only possible because Soviet Union and the United States posed mutually commensurate weight on the balances of powers – not because there would have been some magic “deal” on mutual “peaceful development” of nuclear energy, as modern socialists (including President Obama) envision.

However, this is impossible under what Donald Trump correctly characterized as an “obsolete” and “largely defunct” NATO. The new NATO must be focused on the problem of the Middle East, which endangers all NATO allies today. Warsaw Pact had been dissolved under Vaclav Havel’s auspices in 1991. NATO has continued to exist on the premise of some extant danger. Meanwhile, all European countries have been infiltrated by subversive Islamists, and the virus of socialism and communism has continued to infiltrate all free-minded peoples, much like cancer vanquished in one organ moves to another.

We know what Obama has done – nothing. We know what Clinton would do – another cackle of a “reset” with anyone, just to take a picture and be praised. For what? More of our brave men would fall prey to marauding Muslim hordes and failed promises… We need a strong president who will lead the NATO allies to victory, which means out of this absurd communist miasma of “cold peace” – bearing in mind that it is as much a business venture as a military one.

Donald Trump is correct that NATO has failed repeatedly – on a large scale, it failed in Libya and it failed to prevent the Muslim invasion of Europe. Undermined security means eroded business cooperation.

Donald Trump is incorrect that NATO has no purpose and should perhaps be abolished. It would be exceedingly difficult to set up a similar organization today, based on common defense against the guerilla tactics of the Islamists. Under American leadership, NATO can take action: renew and boost business cooperation, which will lead to military cooperation. Our trade agreements should be focused on our NATO allies, not on perfunctory on countries that neither want to be helped nor deserve our help. It does not matter how we regain unity – but someone must be at the helm, not playing golf and dancing tango!