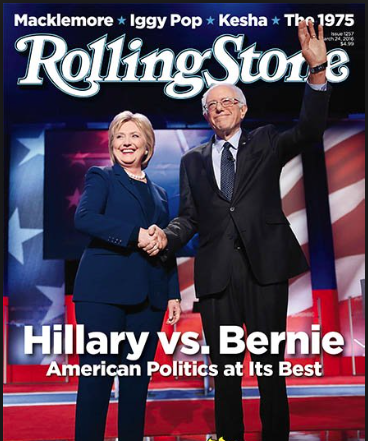 My name is Michael Ingmire. I am the Uncle, by marriage, of Benghazi murder victim Sean Smith. I was disheartened and angry by your recent editorial, “Hillary Clinton for President” (RS 1258, March 23, 2016), proposing Hillary Clinton as “the clear and urgent choice” to become President of the United States for the 2016 election.

Before I explain my anger I want to quote the American songwriter, Johnny Mercer, and “accentuate the positive.”

Looking back at the age of 58, I can objectively see that Rolling Stone magazine was a seminal source of information when I was starting out as a musician. The 1970 John Lennon interviews, the articles about various innovative Blues, Jazz, and Rock musicians in 1960’s and 1970’s helped shape my rhythmic soul and musical taste. When musicians have passed your obituary tributes have always been well written and historically accurate. In addition, the writing and work of such Rolling Stone writers as Hunter S. Thompson, Ralph J. Gleason, Robert Palmer, and Cameron Crowe, among others, broadened my horizons as a music historian and as a political observer. For that, I thank you.

But Jann, somewhere in the mid-1980’s, you lost me as a consistent reader. More pages were allotted to a pastiche of ad space and, unfortunately, the music became more corporate and less interesting. Additionally, a movement was started in your magazine towards less and less objective journalism and more and more a promotion of some oddly bent agenda. As the years passed the pursuit of a biased agenda culminated in the strange love dance that you seem to have with President Barack Obama and the members of his administration.

After reading your March 23rd editorial, “Hillary Clinton for President,” I decided to research articles regarding Libya and Benghazi in past issues of Rolling Stone. I was disappointed in the lack of depth in the reporting of the Benghazi attack by Rolling Stone magazine and it’s writers. Rolling Stone, as well as the national American media, failed to ask the serious questions about Benghazi.

You failed to look beyond the premiss of that the search for accountability about Benghazi was anything but a vast right wing conspiracy aiming to diminish the presidential ambitions of Hillary Clinton.

Jann, did you or your writers ever consider asking the questions that the House Select Committee also failed to ask Hillary Clinton? Consider the following:

On a side note: Have you seen the legendary “anti-Islamic video” Jann? About as offensive as a Borat outtake. Benghazi was a well coordinated, well planned, para-military attack and not a protest about a video.

Above are only some of the many questions that I still have about Benghazi, Jann. The failure of the House Select Committee is one thing. To applaud Mrs. Clinton for lying and obfuscating under oath for 11 hours is quite another consideration. What happened to the vaunted “All the News that Fits” that you still have on the masthead of your magazine? If it doesn’t fit the agenda of the Obama administration you choose not to cover it? What blatant cowardice. You should be ashamed. Why does not Rolling Stone have any journalistic principles left? Are you that much of a Stepford child?

I took umbrage with your statement in your editorial that “Clinton not only has the experience and achievements as first lady, senator and secretary of state, but a commitment to social justice and human rights that began as a young woman.” But Jann, you failed to specify exactly what those achievements are.

Achievements as a First Lady? Creating the blueprint for the Affordable Care Act? What achievement is it to increase American citizens health insurance premiums to go up by as much as 55%? What an achievement! What else did she accomplish as a First Lady? Protecting the sullied legacy of a misogynist President? How noble!

What did she accomplish as a Senator except increase the size of government for the state of New York? What major foreign policy initiative did she accomplish as Secretary of State? The Russian reset button? The selling of one fifth of all the uranium rights in America to Russia? Was it the destabilization of North Africa and the Middle East thru the arming of our enemies?

The same destabilization created the creature in the petri dish that became ISIS. In fact on June 15, 2015 one of the key suspects in the Benghazi attack, Ali Awni al-Harzi, was droned by US forces. He was working as an ISIS battlefield commander at the time.

When women in Tehran, Iran were being killed in the streets in December 2009 seeking freedom where were Hillary Clinton and President Obama? Missing in action. Where is her vaunted protection of women’s rights when it really counts? How has she moved society forward thru her actions? Unless you happen to equate the act of speaking to being the equal of action.

Minimal to none is the true public legacy of Hillary Rodham Clinton. You are demonstrating a level of naivete that is alarming and blatantly uninformed. Research the amount of cash flow that was received by the Clinton’s with their various deals as disguised by the Clinton Global Initiative.

I was also angered by your premature statement ”This is the lingering haze of coordinated GOP smear campaigns against the Clintons-and President Obama-all of which have come up empty, including the Benghazi/e-mail whirlwind.” That statement was premature. First of all the stones in the passway of the Benghazi investigation were created by the Obama administration itself with it’s stubborn refusal to turn over subpoenaed documents. Criminals usually hide the facts behind their crimes.

You also must remember that it was the investigation by the House Select Committee on Benghazi that lead to the discovery that Mrs. Clinton was using a private e-mail server to conduct State Department business. A violation of federal law.

Mrs. Clinton, via her carelessness in sharing information, actually drew a target on the Benghazi victims backs when she revealed the itinerary, actual location and the coordinates of where Ambassador Stevens was going to be on September 11, 2012 thru her use of a private server. You may not think that it is important to protect classified and top secret information Jann. But it usually means protecting the safety and security of our personnel. Sometimes this form of arrogant carelessness can cost someone their life.

You say zilch has been found regarding these investigations Mr. Wenner? Let me edify your mind, the Justice Department normally does not give someone immunity unless a Grand Jury is following close behind. Hillary Clinton’s reign as a Washington shill may soon be over. To be fair, referring again to Benghazi, both political parties share the blame for creating the atmosphere that lead to the attack that killed my nephew, Ambassador Stevens, Glen Doherty, and Tyrone Woods. But it was the Clinton State Department policy, or lack there of, that armed the enemy and lead to the destabilization of North Africa and the Middle East.

In closing, it is not too late to reconsider your endorsement of Hillary Clinton as President. Wisdom can be achieved by research and experience. I urge you to practice some objective journalism and do your homework. Hillary Clinton is not qualified to be President of these yet to be United States.

How Religion is in the Crosshairs