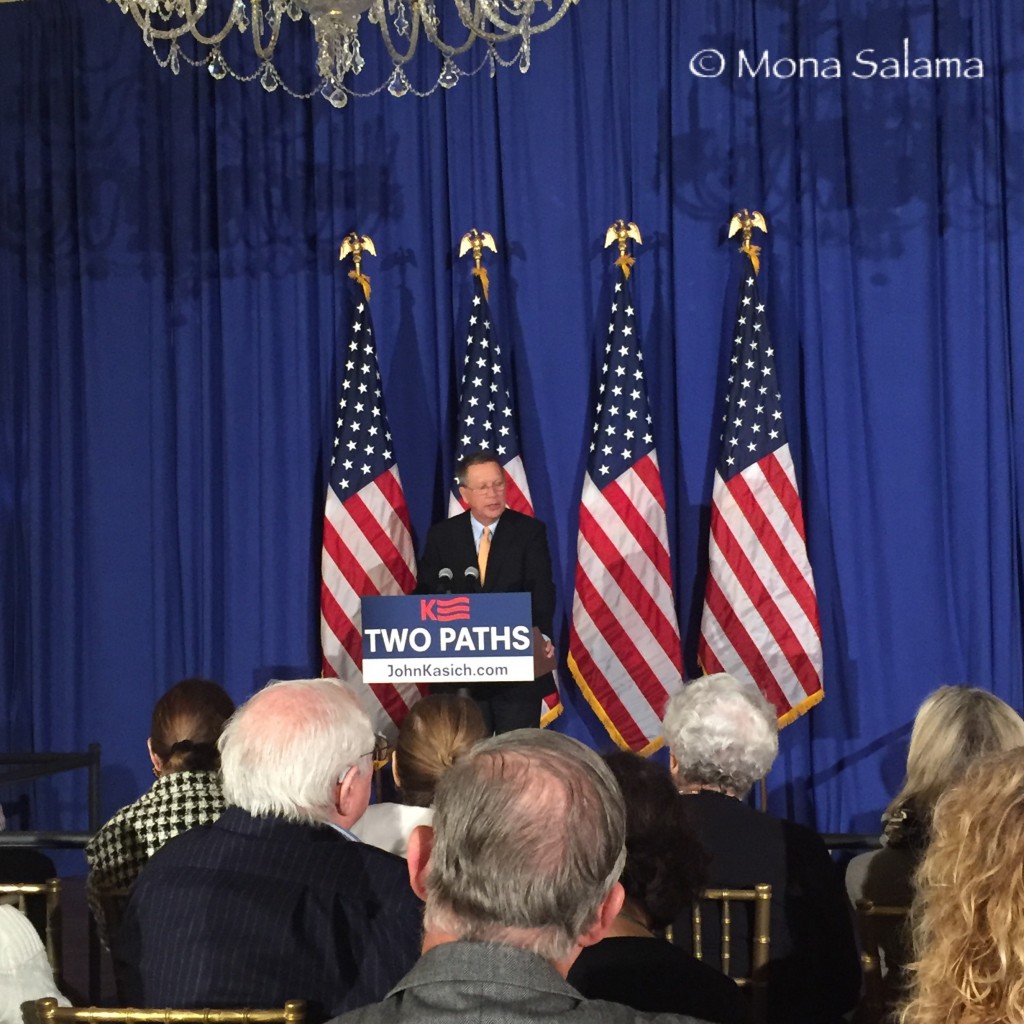 “Two paths,” Kasich said, in a prepared speech from the women’s National Republican Club in New York City. “One choice, The path that exploits anger and encourages resentments that turns fear into hatred and divides people.  This path solves nothing, demeans our history, weakens our country and cheapens each of us. It has but one beneficiary and that is to the politician who speaks of it.”

“The other path is the one America has been down before. It is well trod, it is at times steep, but it is solid,” Kasich continues. “It is from this higher path that we are offered the greater view where fear turns to hope because we remember to take strength from each other. Uncertainty turns to peace because we reclaim our faith in the American ideals that have carried us upward before and America supposed decline becomes its finest hour.”

It was a speech designed to take aim at both Trump and Cruz, a first for Kasich who unveiled his strategy to voters: a selection between “Two Paths.” Although Kasich never mentioned his rivals by name, but listed off certain campaign themes and policy proposals from both Donald Trump and Ted Cruz as well as the name-calling attacks amongst both to distinguish himself as the viable alternative if the convention goes contested in his home state this July. Such proposals he used as examples in his speech included targeting Muslim neighborhoods for surveillance, dropping out of NATO, and cuts in “fraud, waste and abuse.”

“We have heard proposals to create a religious test for immigration, to target neighborhoods for surveillance, deport 11 million people, impose draconian tariffs, which would crush trade and destroy American jobs.” Kasich said. “We have heard proposals to drop out of NATO, abandon Europe to Russia, possibly use nuclear weapons in Europe, end our defense partnerships in Asia, and tell our Middle East allies that they have to go it alone.”

He added, “I have stood on a stage and watched with amazement as candidates wallowed in the mud, viciously attacked one another, called each other liars and disparaged each other’s character. Those who continuously push that type of behavior are not worthy of the office they are seeking.”

“Some who feed off of the fears and anger that is felt by some of us and exploit it, feed their own insatiable desire for fame or attention,” Kasich said. “That could drive America down into a ditch, not make us great again.”

Speaking to a room full of supporters, Kasich offered a path highlighting a “better, higher path,” that offers solutions “rooted in American ideals” based off past work he has done in Washington and as Governor in Ohio . He also outlined his agenda for the first 100 days that includes a plan to balance the budget, fix social security and to return power back to the states in regards to welfare, Medicaid, education and highway infrastructure.

“When we do these things, we will unleash economic growth, which means more jobs, higher wages, and the restoration of the American Dream that our children will inherit a better America than we received from our parents,” Kasich said.

With just one week before New Yorkers head to the polls, the pressure is intensifying with candidates soliciting for votes in various of forums in the Empire State instead of the usual request of campaign funds. Kasich, who is lagging far behind Trump and Cruz in delegates, but has been polling in second place in New York, a chance he can pull some delegates away from the front-runner if Trump fails to garish 50% of the votes statewide in the proportional allocation primary.

The small event was seen to garnish headlines for the day but became a shadow when House Speaker Paul Ryan announced he would be holding a press conference to announce once again that he will not be the GOP alternative nominee under any circumstance during the July RNC convention.

Speaker Paul Ryan on Presidential Nomination: "Count Me Out"