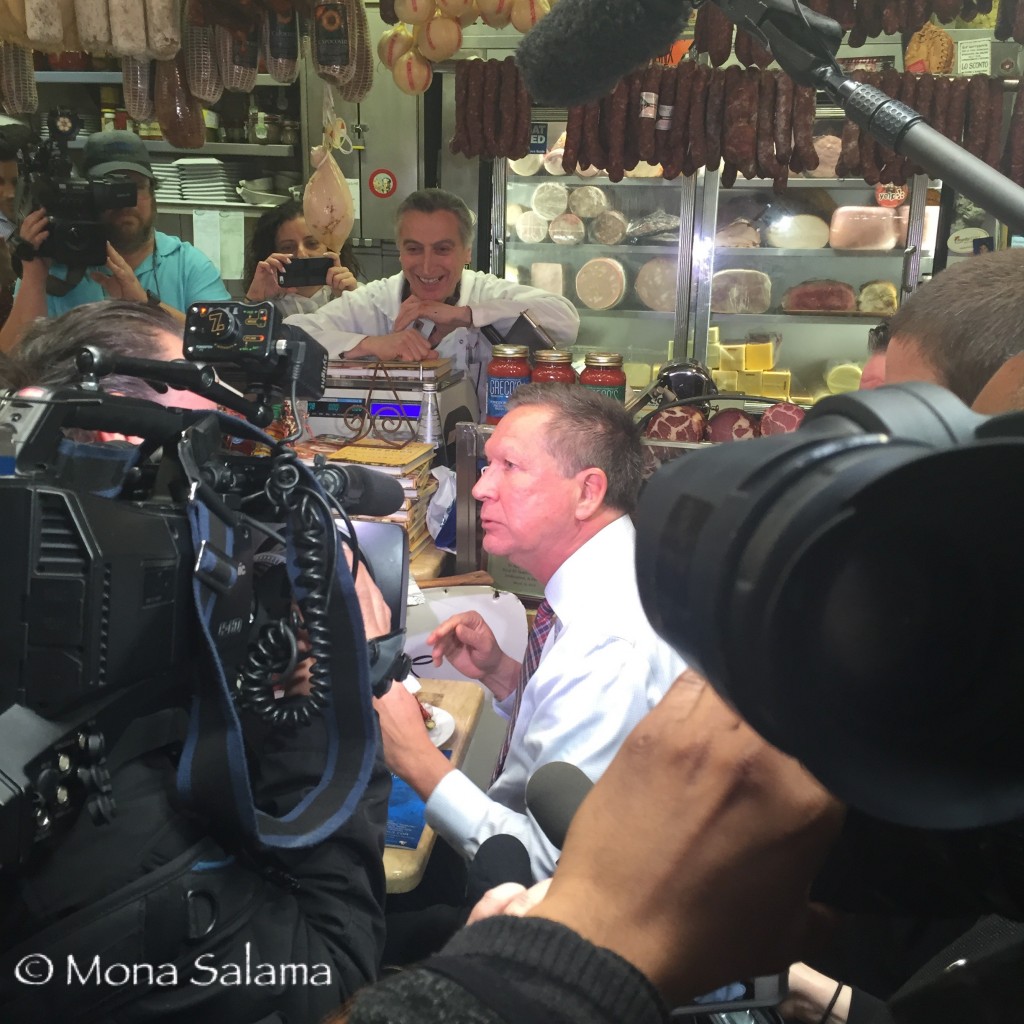 Republican presidential candidate John Kasich made his pitch to prospective voters in two boroughs of New York City — Bronx and Brooklyn on Thursday that the “strongest days are ahead” in his long-shot campaign against his GOP rivals Donald Trump and Ted Cruz.

In his afternoon appearance at the Arthur Avenue section in the Bronx, Kasich got a taste of the best the Bronx borough (in which I am lucky to have been raised in this area of New York) has to offer in food. Mike’s Deli, inside the Arthur Avenue Retail Market, a neighborhood institution that is famous for its Italian delicacies such as imported Culatello and red sauce, the Ohio Governor got a taste of what many locals get to experience on a daily basis.

“This is like being so alive, being in New York,” Kasich said to reporters as he was chowing down the food the owner David Greco had laid out for him. “If I lived here, I would be here every day.”

Coined as a meet and greet on his campaign schedule, Kasich was greeted warmly by the few hundred locals, mostly Fordham University students who showed up to greet the Ohio Governor. After feasting on a sandwich special the owner named after him and two plates of pasta fagioli, Kasich answered a few questions thrown to him by reporters who watched him savor every bite of his food.

“I think our strongest days are ahead of us,” Kasich said. “I think our greatest challenges were in the past. Now we are just going to keep moving.”

When asked by a local New York reporter what he does he think of what “New York values” mean to him, Kasich didn’t hit on Cruz like his new ad he launched, instead took a positive road to explain what he thinks those values are.

Kasich, on Thursday released his first TV campaign ad ahead of New York’s April 19 primary to be aired only in New York City and Long Island. In the 15-second commercial ad, Kasich plans to remind New Yorkers that Cruz is no fan of New York by using the Texas Senator’s own words against him.

In the new ad, Kasich uses Cruz’s remarks that he said at a January debate in Iowa in which he said Trump, “embodies New York values” a term that is now hurting Cruz as both rivals are using it against him.

“In Iowa, Ted Cruz sneered at our New York values,” the narrator says in the Kasich ad video. From there the ad shows Cruz remarks he said in the January debate about what “New York values are.” It then returns to the narrator and continues to say- “Ted Cruz divides to get a vote. John Kasich united to get things done.”

The most recent public poll of New York voters, from Monmouth University, has Trump at 52%, Kasich at 25% and Cruz at 17%.

Kasich acknowledged that he won’t win in Trump’s home territory, but hopes to pick up some delegates to add to his long-shot bid. “Here in New York we are running in second now,” Kasich said. “In Maryland we are now running in second and in Pennsylvania, I haven’t seen anything lately, but the last thing I saw had us in a virtual tie for first place.” 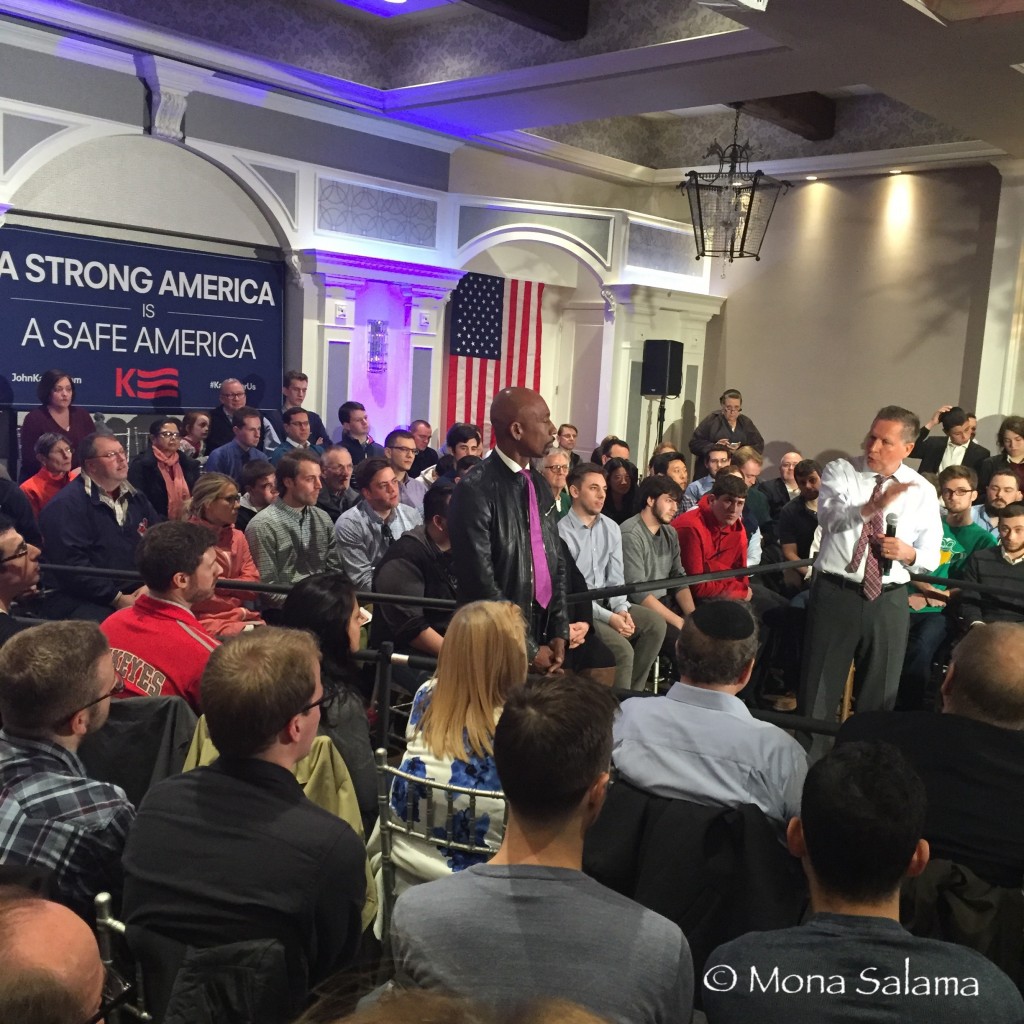 Later in the day, Kasich headed south to the Bay Ridge section of Brooklyn to host a Veterans Town Hall with TV talk show host Montel Williams as his special guest. Williams introduced the governor as the only GOP candidate who could “bring America back together again.”

Williams also angrily blasted Trump for mocking Arizona Senator John McCain who was captured during the Vietnam War while he received deferments. “One in particular made sure he got a deferment,” Williams said. “And then he writes a book talking about how he spent time with models, but turns around and say the people that spent time in Hanoi prison aren’t heroes. How dare you?”

Once he finished his speech, Williams introduced Kasich and the Ohio Governor applauded Williams for his support and joked baout him running for mayor and making him his vice president. “How about Montel Williams for mayor of New York City?” Kasich said. “I might even make Montel my VP pick, what do you say Montel.”

During his hour long event in which most of the time was spent taking questions from the audience, Kasich spoke about the Department of Veterans’ Affairs and his plans to fix the problems of our wounded veterans in terms of service and wait time. “When we know a veteran is coming home, we need to know that the Pentagon is working with the States to get the veterans the help they need and the service they need,” Kasich said as he outlined his plans to fix the VA. “There needs to be accountability in the VA and if they are not doing their job, they should be fired. A veteran shouldn’t have to put on hold for a two day waiting period just to connect to the suicide hotline.”

For the most part, Kasich refrained from attacking the GOP front-runner but took one slight jab against Trump when he said he would have a steep learning curve as president because of his inexperience in politics.

“People think, ‘well, we will pick Trump because he is not a politician,'” Kasich said. “Well he will have to spend the first hundred days trying to figure out where the bathrooms are.”