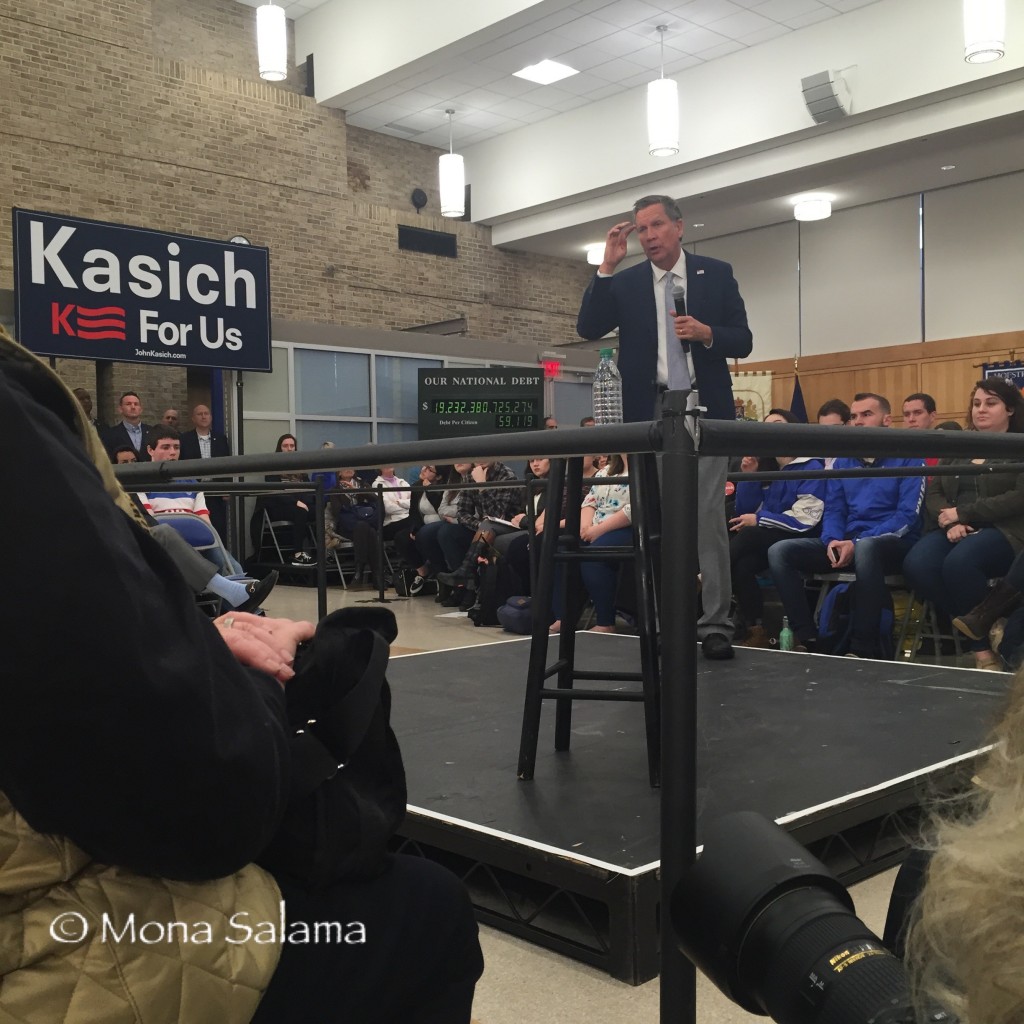 Long Island, N.Y. — Looking ahead to the New York presidential primary, Ohio Governor John Kasich is wasting no time campaigning in the state that will play a pivotal role in deciding who will get the nomination come July.

Campaigning in two stops on Long Island, a island with a majority of Republican voters, Kasich is taking part in two town hall meetings, one in the morning at Hofstra University in Hempstead and one in the evening at The Paramount in Huntington. With the Wisconsin primary a day away, Kasich has decided to turn his attention to New York, where 95 delegates are up for grabs.
During his AM event held at Hofstra University in Hempstead, Long Island, Kasich focused his positive speech on his experience being in Congress for 18 years and his time being an Ohio Governor. He described himself as a fiscal conservative where he states as president he would work to balance a budget like he did during his time as congress by shrinking the federal government but preserving benefits such as Social Security.
“You know it’s not that it’s hard to fix that, it isn’t. I have done that throughout my whole career,” Kasich said, as the debt clock he brought ticked away as he spoke. “You can’t ring up all this debt. I believe in balancing the budget, tax cuts, and I believe in transferring power out of Washington to states and where we live.”
After giving a 20 minute speech, Kasich took questions from the crowd about media bias, his rivals forcing him to exit the race, and Planned Parenthood.
Becoming the first GOP candidate to launch a NY campaign ahead of the state’s April 19 primary, Kasich pointed out how he is the only candidate in the field that shows he is poised to beat Hilary Clinton come time to the general election in Wisconsin even though he is not favored to win in the state’s Republican primary. “We never thought we would win in Wisconsin,” Kasich points out. “But there is a poll that came out today that shows me beating Hillary Clinton by 14 points in Wisconsin but I am going to lose Wisconsin tomorrow. This is unbelievable on how the process is going, isn’t it.”
Both Donald Trump and Ted Cruz have called on Kasich to drop out of the race with Cruz stating he “doesn’t have a straight path to securing the nomination” while Trump adds he is stealing votes. “I’m not getting out,” Kasich said to an audience member who begged the Ohio Governor to stay in the race. “I’m dropping in, I”m not dropping out.”
“Why would I get out?,” Kasich told reporters after the town hall. “Particularly when Trump’s worried I’m going to get his votes and Senator Ted, the smear artist, is smearing me, spending a million dollars. For a guy that is not doing very well, they sure are worried and spending a lot of money trying to knock me out. But they are not gonna be successful.”
He went on to add how his rivals political experience would play a factor in helping him win at the convention. “We have one guy with no experience and the other guy who experience amounts to shutting down the government and calling the majority leader a liar,” Kasich said, referring to both Trump and Cruz respectively. “How do we go to a convention and we pick somebody that can’t beat Hillary? I’m not gonna be a pincushion and I’m not gonna be a marshmallow.”
Kasich stated there are only two main reasons a candidate should drop out of the presidential race. “The reason you drop out is when you think, first of all, if you run out of money, which we are not not,” Kasich said. “And secondly, though is when you are certainly been thinking, ‘Well, my mission’s been fulfilled.”
Vowing to stay in the race, Kasich told the 350 supporters who gathered at Hofstra University, that the race within the GOP field has become “disgraceful.”
“Im not going in there operating in the gutter with smears and attacks and all this nonsense we see in this campaign,” Kasich said. “Its disgraceful.” 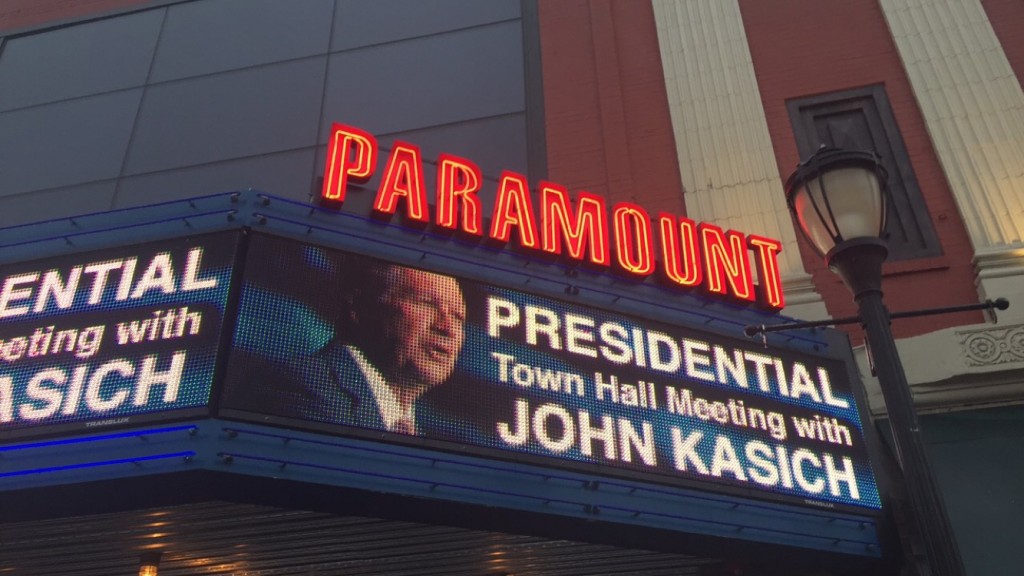 One young woman wearing a pro-Planned Parenthood shirt took the opportunity to challenge Kasich on his approach, hoping that the Ohio Governor who recently defunded the women’s health organization in his home state would stumble when answering the question. “I think the organization has discredited itself,” Kasich answered, explaining his Medicaid expansion helps woman get the health care they need instead of only going to Planned Parenthood. “There are over 300,000 women in the state of Ohio that get health care that they hadn’t been getting before. I don’t believe anybody in the country should go without health insurance.”
On the media bias where Trump is receiving over $2 billion in free advertisement while Kasich is receiving only $38 million, the Ohio Governor believes the reason for this is due to certain stories that will get eyeballs. “In the case for me, I am not saying wacky things out there. I’m saying things that will fix the country and those are boring,” Kasich said. “I choose to live in the boring lane because I believe that’s the constructive way to fix the country because the other things are not going to fix it.”
Kasich added his endorsements from newspapers don’t matter because they haven’t helped. “I have been endorsed by more newspapers- more than 30- I love them, but have they moved the needle- No,” he said. “But I love getting them because it’s an affirmation. I got endorsed by the New York Times and people are like that’s really bad. I got endorsed by the New York Post.”
“I may have been ignored for about six months of my campaign because I spent my time taking the high road to the highest office, not the low road,” Kasich added.
During a press avail held in Theodore Roosevelt home in Oyster Bay, Kasich responded to a different question asked by PolitiChicks in regards to the Republican candidates having a debate in New York, a question that has yet been asked to the Ohio Governor as the press continues to press on about a contested convention. Currently the Democrats are fighting amongst each other in regards to a New York debate in which Senator Bernie Sanders is pressing the Democratic front-runner Hillary Clinton to have one in Brooklyn before the primary. Clinton’s campaign stated they will have a debate if only Sanders would “change his tone.” Sanders’ campaign state that Hillary is “seeking to avoid a debate in New York” as she proposed dates during times Sanders has locked in a park permit for a rally and during the NCAA finals. As of yesterday both sides have agreed on April 14 as the date for the debate, the same date the three GOP candidates are scheduled to attend the NYGOP annual gala.
“I think the debates are a little bit crazy, but if they all want to do it and debate then fine,” Kasich responded. “But I do prefer the town halls because it gives me a chance to answer the questions in depth. Maybe both wouldn’t prefer a town hall because both have to answer questions in a town hall and not only just give sound bites.” 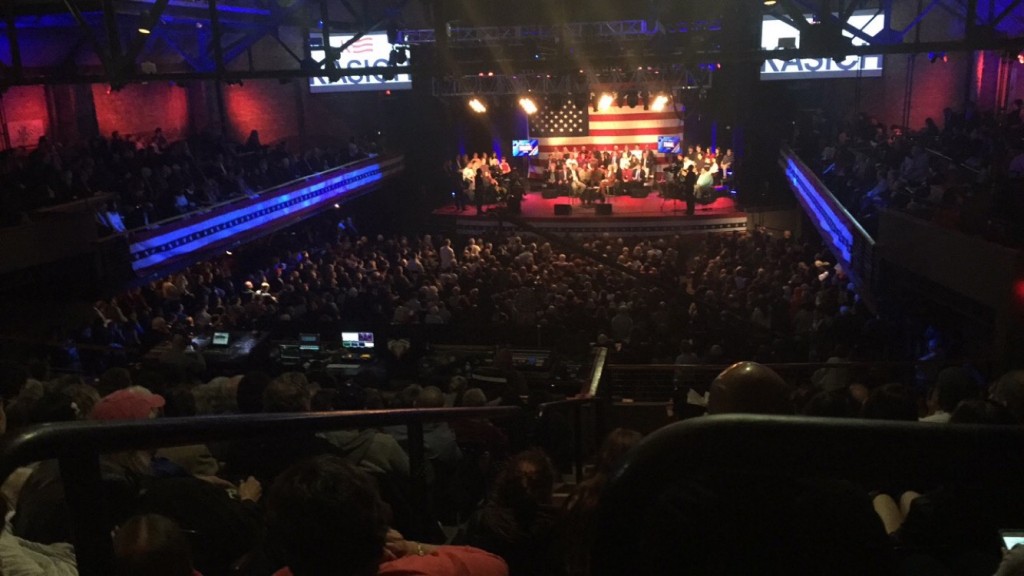 In his second event held in The Paramount theater in Huntington, Kasich stood before a crowd of about 3,000 continued to detail his plan to win the nomination at a contested convention. “I do understand the fear that Trump voters have and I think, maybe some of these evangelicals who largely support Cruz can come toward me,” Kasich said, answering a question from an audience member on winning the nomination. “I just think I need to get better known and it’s happening now.”
Noting that Cruz isn’t mathematically capable of also gaining the 1,237 delegates needed to win the nomination, Kasich described the scenario to the crowd of what could occur in Cleveland. “So here is what is going to happen,” Kasich said. “Nobody is going to have enough delegates to go to the convention and win on the first ballot.”
“Once you become a delegate to the convention, all of a sudden the weight is on your shoulders where one is going have to decide on who is going to win in the fall and the one who has got the experience, the record and a vision to run the country,” Kasich added.
On winning New York, Kasich joked about overcoming the “pizza gate,” where he was caught eating a pizza with a fork during his visit to New York last week for a televised MSNBC town hall. “I think I’m going to do well here because I’m going to overcome that picture of me eating pizza with a fork,” Kasich said to laughter from the audience.
Currently in the delegate count, Trump has 736 while Cruz has 463 and Kasich has 143.
Share
Facebook Twitter Pinterest Reddit Share via Email Print