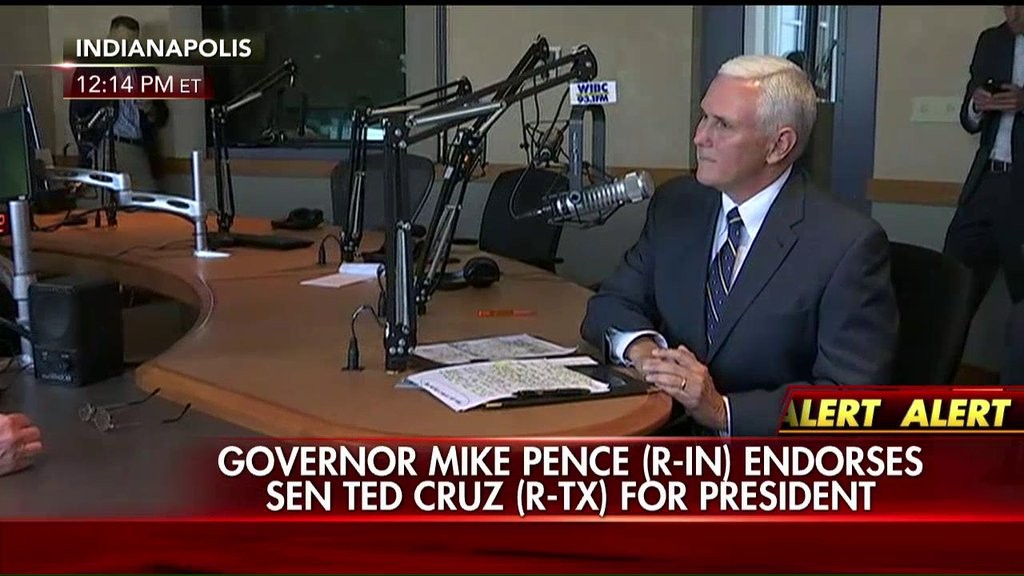 “I’m not against anybody but I will be voting for Ted Cruz in the upcoming Republican primary,” Pence said during a conservative radio appearance on s Greg Garrison show in Indianapolis. “I see Ted Cruz as a principled conservative who has dedicated his career to advocating the Reagan agenda and I’m pleased to support him.”

However, before announcing his support, Pence commended Trump for giving a voice to millions of Americans frustrated with Washington and his stance for companies such as Carrier Corp for moving to Mexico. “I particularly want to commend Donald Trump, who I think has given voice to the frustration of millions of working Americans with a lack of progress in Washington, D.C.,” Pence said. “I’m also particularly grateful that Donald Trump has taken a strong stand for Hoosier jobs when we saw jobs in the Carrier Company abruptly announce leaving Indiana not for another state but for Mexico. I’m grateful for his voice in the national debate.”

The endorsement from Pence might gives Cruz the boost he needs in a must win situation to stop Trump’s momentum and to prevent him from securing enough delegates to meet the 1,237 threshold. A recent poll released on Friday morning shows Trump is continuing to lead over Cruz; 37%-35%. As Cruz campaigns aggressively, repeating his strategies that saw success in Iowa and Wisconsin, he has failed to attract the much needed support from the state’s leading Republicans, unlike Trump who received an endorsement from influential supporter, legendary former Indiana University basketball coach Bobby Knight.

At his Indianapolis campaign stop earlier Friday morning, Cruz praised Pence before the endorsement, providing a teaser, but stop short to state he didn’t know the Governor would be endorsing his campaign per say. “I didn’t see the tweet Greg Garrison sent out of a major announcement coming on the show, at 12:06 p.m. I know I’m going to be listening. I would encourage other folks to listen as well,” Cruz said. “I have tremendous respect for Gov. Mike Pence. He has been an incredible leader for the state of Indiana.”

During the interview, Pence repeatedly praised Cruz and Trump, as well as John Kasich and told Indiana voters to make up their own minds. “I have met with all three of the candidates and I want to say, I like and respect all three of the Republican candidates in the field,” Pence said. “I just encourage every Hoosier as I have, listen carefully to all of their positions, make their decision, exercise their right to vote this coming Tuesday, if not before.”

He added, “But after voters make all of their choices between now and June the 7th and our party settles on a nominee, on a team, on a ticket, I promise you I’m going to work my heart out for that team and make sure we deliver a great victory.”

After the interview, Cruz’s campaign release a statement of Pence’s endorsement:

“I am honored to have Mike’s endorsement,” said Cruz. “Mike has been an important voice for conservatives during his time as Governor. The success of Indiana shows that conservative ideas work. I look forward to working together to continue to coalesce Republicans around this campaign.”

Sunny Lohmann: Should I Invite Men Into My Bathroom?