Last night on the “Tonight Show Starring Jimmy Fallon,” Texas Senator Ted Cruz stopped by to talk about the 2016 GOP presidential race, front-runner Donald Trump, and his family. Earlier in the show, Cruz did a sketch with “Donald Trump,” played by Fallon of a phone conversation between him and Trump.

In the sketch, Cruz gets a phone call from “Trump”, who told his opponent he has been on the “‘Tonight Show’ many times” and to give him pointers before his appearance. Cruz said that it “was a very generous offer, and appreciate him for being a bigger man,” in which Fallon mimicked the hand attack once used against Trump by a former rival Marco Rubio. “Oh, I am the bigger man with the bigger hands,” Fallon said. “You can’t see me, but I am pointing at my Trump Tower.”

After Fallon began asking Cruz questions that the ‘Tonight Show’ host would ask him during the appearance. One question was asked in regards to how Cruz would win in Trump’s home state given that New Yorkers “are still mad at his quote of New Yorkers having “New York values” and what did he mean by that.” 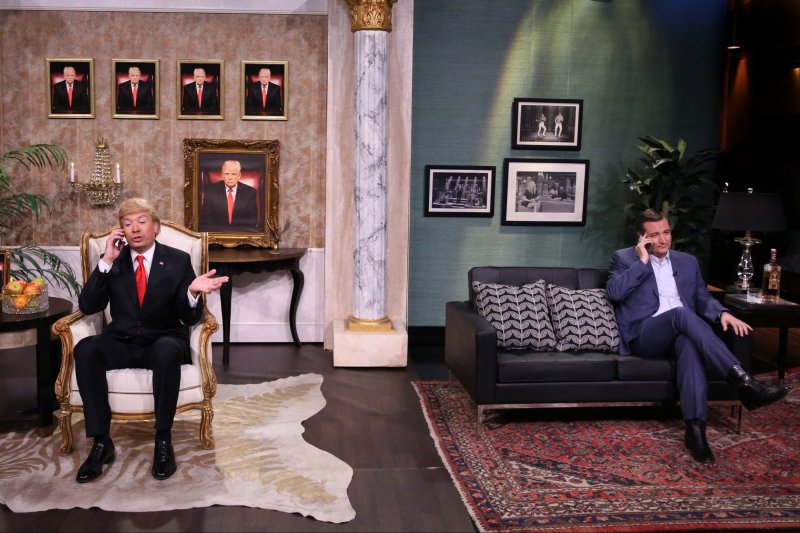 “Look, Donald,” Cruz said. “I’m not going to pander to New Yorkers. I love New York City. It’s the greatest city in the world, with the best-looking audiences in the entire world. So when I said ‘New York values,’ I was merely trying to say ‘I value New York,’ except saying it backwards, like Yoda.”

Fallon continued to offer Cruz advice and asked Cruz to get a pen and paper to jot down what was being said. Cruz said, “Hold on, let me get my pen,” and instead poured a glass of whiskey. After, Fallon asked Cruz the last question on “why he should be the GOP nominee?”

In regards to lip-sync battle, Fallon told Cruz he has a perfect song for him to sing, as Rihanna’s “Work” song began to play.

Friday April 15th is National Day of Silence. But Why?