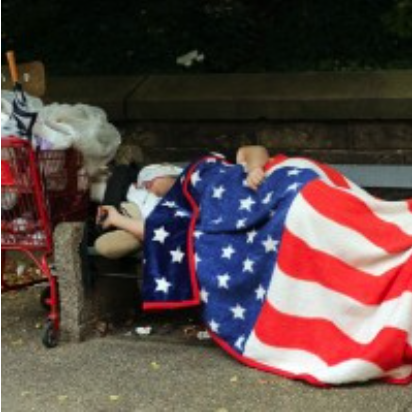 About 2,000 years ago, a very wise man said that we would always have the poor among us. For twenty centuries, now, his words have proven

prophetic everywhere, and unfortunately, the United States of America is no exception. Even in the richest nation on Earth, many people struggle with poverty, and with homelessness. This is not always their fault; many of these people are simply down on their luck, having lost a job and running into trouble finding another, or suffering an unexpected medical crisis that drains their resources. But however they get there, the result is all too often the same: Descending into hopelessness and despair, and in some cases, resorting to deplorable, self-destructive acts in a desperate attempt to stay alive. This isn’t a life for anyone, least of all a US citizen.

Unfortunately, the way we treat these people isn’t much better. Many people are uncomfortable around the homeless, shunning their company (behavior of which that wise man from 2,000 years ago wouldn’t much approve). For reasons that may have nothing at all to do with them, the homeless become outcasts, right within their own communities. The homeless themselves often come to adopt this mindset, as it is foisted upon them by so many others.

The benefits they reap simply by having their own place are immense. Not only does it give a person the sense of community and belonging with their neighbors that they lack on the street, but it can lead to a profound change in character as well. Many homeless people come to see themselves as no good because of their circumstances, and so do not care about committing crimes or doing other horrible things because they do not care about themselves. Having a place to live can change all that, unlocking the basic goodness and morality that is inside them by causing them to value themselves. It gives them stability, and stability is key.

I heard this statement on an old television show and it reminded me of what are they really asking – and what are we hearing “I give you some wood and I ask you for a place for a TV. You build me a cathedral. I don’t want a cathedral. I like where I live. I just want a place to put my TV.”

It is not that we can’t help them. We have everything that we need to do it – empty buildings in which they could live, farms, even undeveloped plots of land that could be a home to someone. The problem is that we all struggle under a bloated, inefficient political government that can’t seem to effectively perform its function: Serving the people.

That doesn’t mean giving handouts. It is important to be there for people when they need the most help, but government entitlements can easily turn into poverty traps. Think about that for a moment. If you were getting $1000 per month for free from the government for being unemployed and poor, would you take an $800 a month starter job that would make the monthly government checks stop? Some people would, but it is hard to expect anyone to make that decision (especially if they have a family to care for), and it’s understandable why they might not. That’s why we have to be careful about simply giving things away. Give someone a fish every day, and he may never bother to learn how to fish for himself.

What the government can do is help these people get back on their feet. It’s “a hand up, not a handout”, as the saying goes. We can assist them in finding jobs, we can encourage the growth of businesses in order to create jobs, and we can reduce tax burdens on everyone who is just trying to make it. Major corporations in the private sector make efficient, effective plans for projects that will not come to fruition for twenty or thirty years, sometimes more; why can’t the government help its own people now? Maybe because the politicians in charge of it aren’t as good at planning as they’d like us to believe.

But let’s not start thinking government alone is the answer. That’s almost never true. When you think about the problem of preventing homelessness, you realize that we can do it because we have done it before. Why didn’t we have so many homeless people a hundred years ago? It’s because we built solid local communities with strong traditional values based on neighbors helping neighbors. Men and women worked good, well paying jobs that strengthened the economy, by paying it forward to their local communities for the benefit of the community and allowed them to provide for their families, women and men watched the local children (not just their own) – and those children, when they were old enough to be out of diapers, did household chores that taught them responsibility and reduced the workload on the adults. Everyone pitched in, so no one was alone. Everyone was satisfied because the community felt it was never a handout and the “homeless” were never really homeless. We didn’t let our own fail.

And that’s the real solution here, far more so than any government intervention. We need to go back to the unbreakable local communities that kept us strong and made us look out for each other. If we give people hope, they can never fall into hopelessness. Let’s prioritize the homeless and help them, not shun them. We may always have the poor, but if we ignore them and refuse to show compassion for people who are our neighbors, then it is we who are bankrupt – in spirit.

U.S. Troops Still Taking Their Lives while Protecting Ours