New York, NY. — With five days to go to the New York primary, all three GOP hopefuls were under one roof to speak at the New York GOP state annual gala in Midtown Thursday night.

Meanwhile, outside where the gala was being held, hundreds of protesters took to the streets protesting the function and in particular the front-runner. According to the NYPD, 31 people were arrested outside the hotel function and as well as inside. A smaller group of protestors were able to sneak inside the hotel and found a way to make a scene in front of reporters waiting to enter the gala. The small group were able to exit an elevator bank and began chanting in both English and Spanish: “We ready, we coming!” while holding a banner until they were escorted and ultimately arrested by the police. 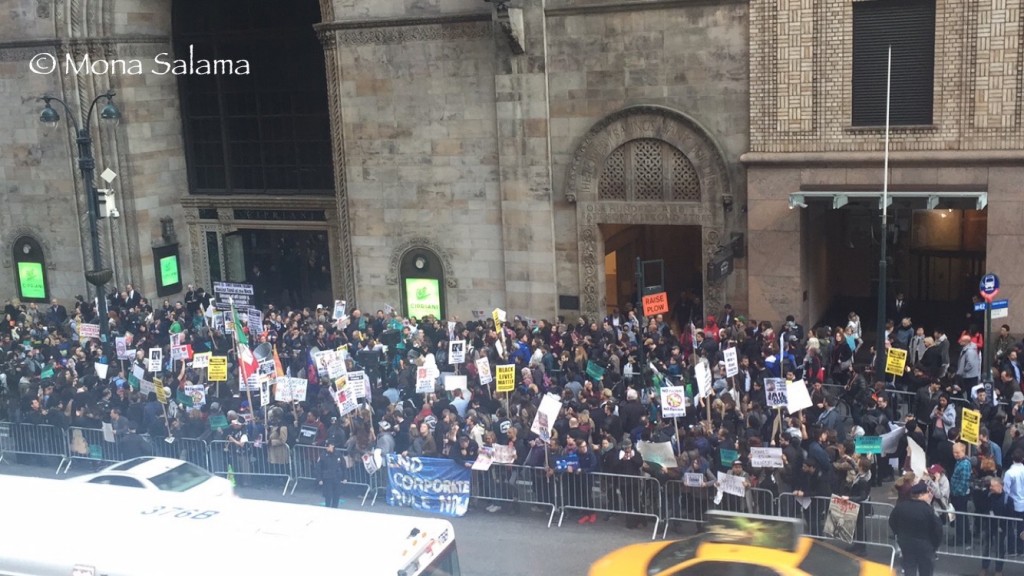 Outside, protestors focused on protesting Trump candidacy as they filled the pens outside the hotel as hundreds of cops helped maintain the order and to prevent the radicals from trying to enter the venue. Many different types of protestors from anarchist to Occupy Wall Street and Black Lives Matter group broke off and began marching around the facility of Grand Central Terminal and the Met Life Building as means to enter the hotel from the different entrance provided. However, the protestors failed to enter inside.

Over 800 New York Republicans from across the state gathered at the New York GOP state annual gala to listen to all three GOP candidates make their pitch for support for the upcoming primary on Tuesday. The first to speak was front-runner Donald Trump, who delivered an impassioned speech defending his home state, a jab to his leading rival Ted Cruz for his remarks of “New York values.” 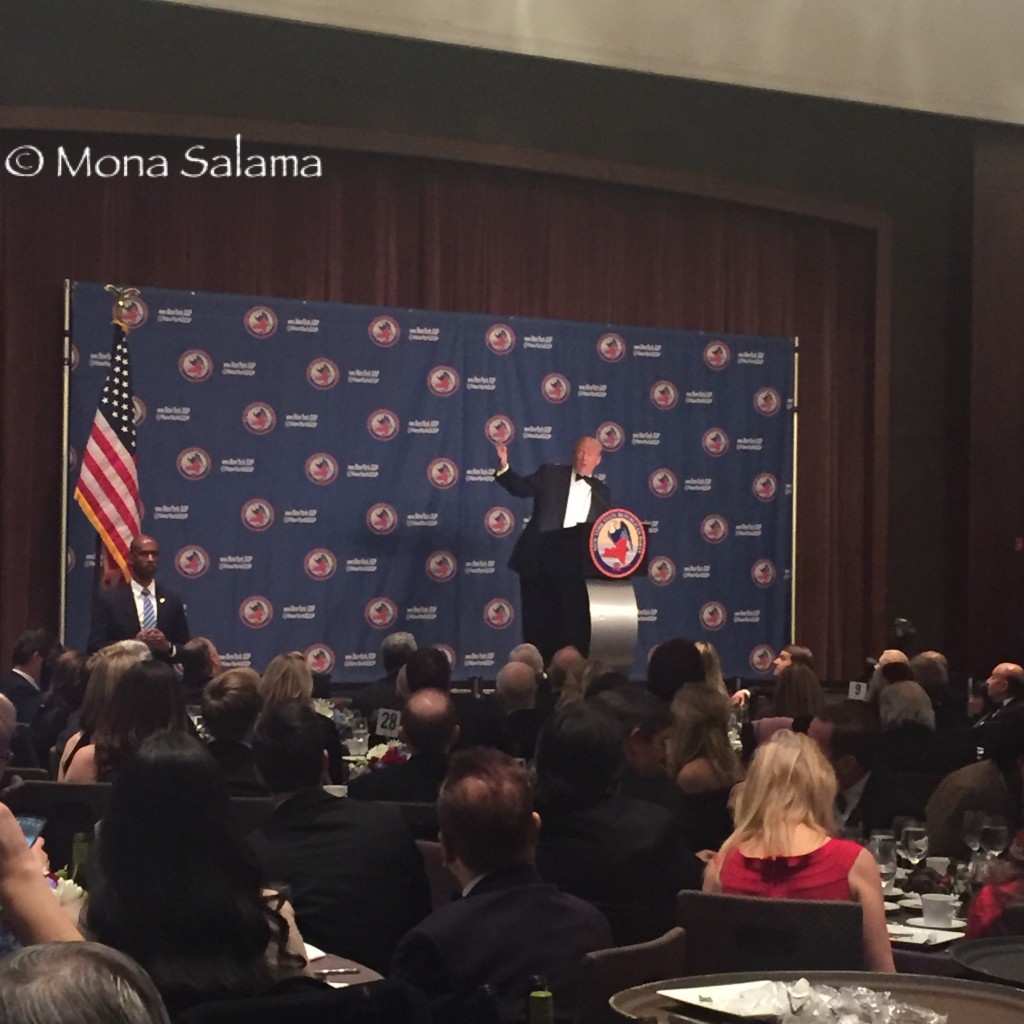 “What are New York values? Because, you know, people are disputing,” Trump said. “No. 1, honesty and straight talk. You better believe it. It’s a work ethic. New York is about family; it’s the energy to get things done. Big energy, we are builders. We make things happen and it’s the courage and community service. We have some really, really incredible New York values.”

Trump continued, “In our darkest moments, as a city we showed the world the very, very best in terms of bravery, heart and soul of America. These are the values we need to make America great again.”

During his lengthy remarks, Trump opted out of talking politics, knowing the crowd didn’t want to hear a campaign speech during dinner and drinks. “Who the hell wants to talk about politics all the time?” Trump asked the room. “Because politics can get a little boring.”

Instead the hometown front-runner reminded the black-tie crowd his strongest suit, his business venture. He recounted a story of transforming the site of the gala, the Grand Hyatt in Grand Central from an aging rotten Commodore Hotel. “I built, you know, many other buildings across the city. I’m just listing some of them,” Trump said. “This was my first. This was my first- the Grand Hyatt hotel.” 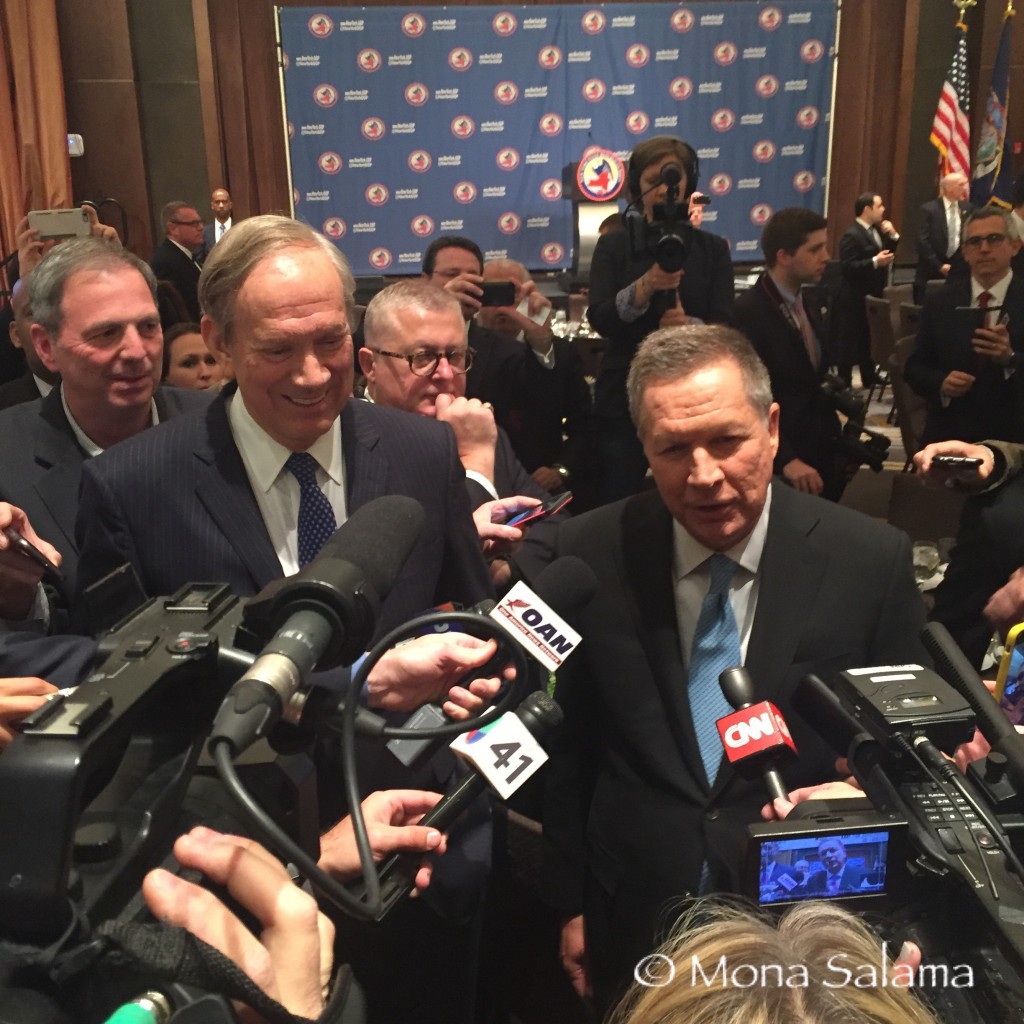 Ohio Governor John Kasich spoke after Trump and touted his endorsement from former New York Governor George Pataki. Before the gala began, Kasich and Pataki entered the press pit to inform the media of the endorsement.

Pataki, the former governor of New York for three terms, endorsed Marco Rubio after dropping out of the race in late December. Making no mention of Cruz, Pataki however, ripped on Trump extensively during the presser. “I don’t think Donald Trump should be president of the United States. I don’t think he is going to be president of the United States,” Pataki said. “If he is our nominee, I fear he is going to drive the Republican Party off a cliff.”

Kasich, who is running second in New York polls, is looking to build more support and gain delegates in the Empire State where 95 delegates are proportional awarded to the winner of each of the 27 congressional districts. Only winning his home state of Ohio, Kasich has nonetheless remained in the race and has been the most active GOP hopeful campaigning intensely in New York. 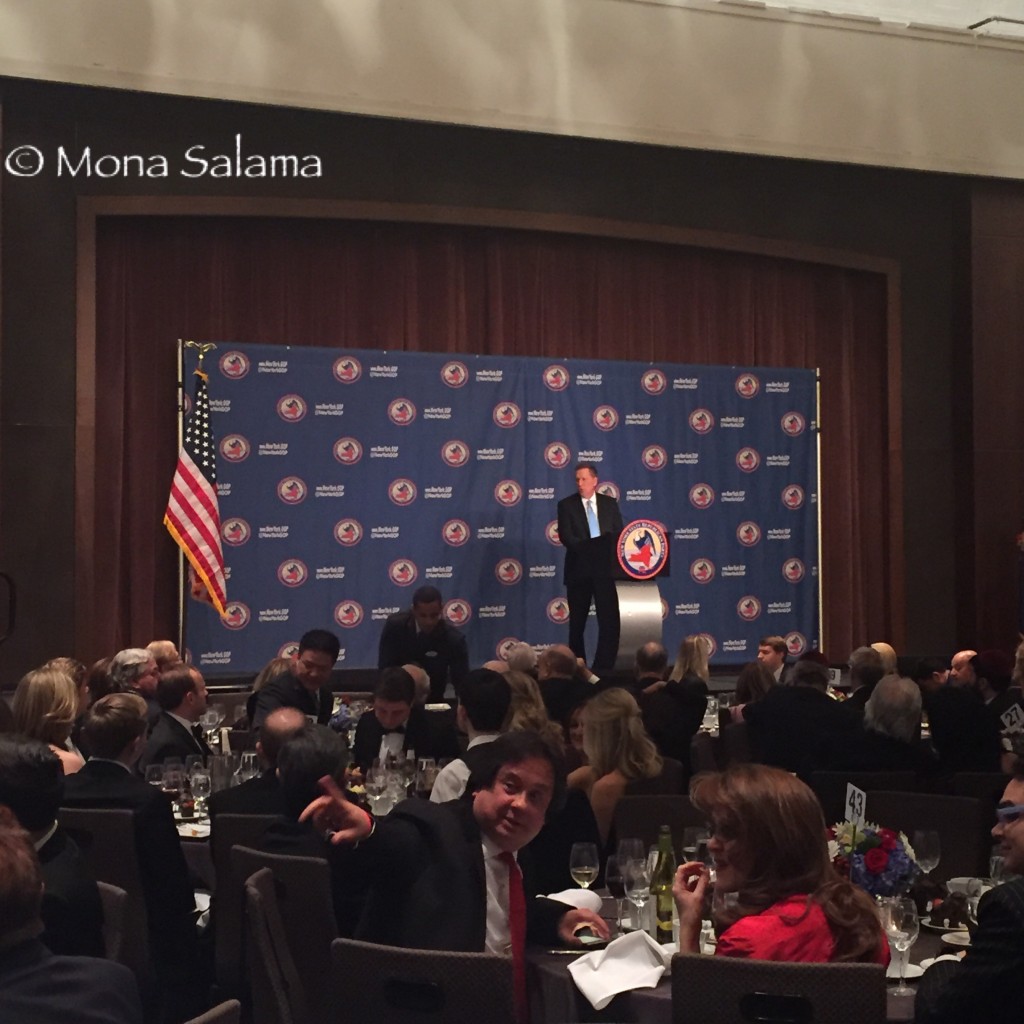 “I really do believe that the folks of New York will forgive me for that big mistake I made when I had that scalding piece of pizza and actually took a fork and touched the pizza pie with it,” Kasich joked, in reference to his stop in Queens where he was caught using a fork to eat a pizza.

The biggest problem Kasich faces are gaining more delegates before July. He presented the crowd with his strongest defense on how he will win the party’s presidential nominee by reminding everyone how he is the only candidate that can beat Hillary come November. “I’m going to leave Cleveland as the nominee,” Kasich said. “Whether you believe it or not, it’s going to happen.”

After Kasich short speech, Texas Senator Ted Cruz took to the stage and tried to begin his remarks with a subtle joke in relations to Trump. “I will admit to you, I haven’t built any buildings in New York City,” Cruz said, as no one laughed at the joke. “But I have spent a lifetime fighting for constitutional liberties.”

As dinner was being served during the time Cruz spoke, the din of dishes and silverware punctuated audio problems to the cameras, making it difficult for viewers at home to hear Cruz’s remarks. However, inside the venue, Cruz received a cold shoulder from the crowd as many seemed tuned off of as he gave his usual campaign stump speech that focused on his commitment to Israel, killing terrorists and abolishing the IRS. He also boasted his recent victories in Colorado and Wisconsin over Trump, a comment that received polite light applause with a few stepping out of the room.

Cruz reminded the audience that Republicans are uniting behind his campaign. “We are seeing the party come together, and the choice we face is simple,” Cruz said. “We either unify or we die. If we remain divided, we will lose.” 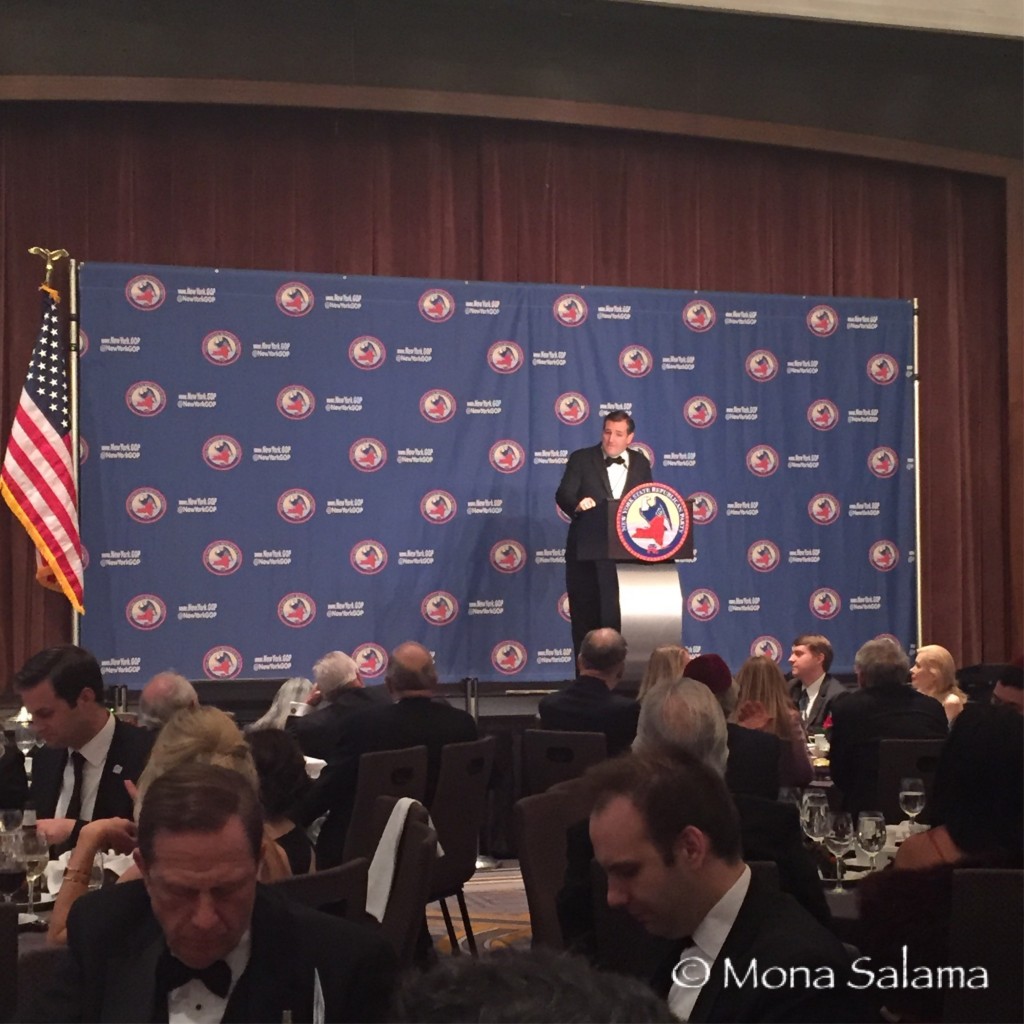 He did not mention the New York values that he had previously derided on the campaign trail. “New York City is hallowed ground. It is the site of the worst terrorist attack on United States soil,” Cruz said. “And yet, in the 15 years since 9/11, many in Washington have forgotten that.”

After Cruz ended his remarks, some of the audience clapped politely while most didn’t. The GOP financial chair took to the stage after and thanked “Ted Bush” for his remarks, a comment that went unnoticed.

Once the dinner event ended around 11pm so did the protestors who were long gone by then. One NYPD officer said they left around 9pm or so when they realized that they weren’t gaining any attention from the media or on looking commuters.

Trump enters Tuesday’s primary vote in New York with 742 pledged delegates, leading Cruz, who has 529, and Kasich, with 143.

For Cruz, A Grassroots Strategy Is Paying Off