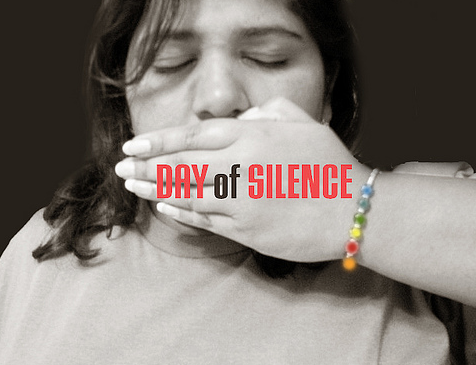 April 15th is this Friday.  Are you ready for the National Day of Silence?  What is it, you ask?  Some sort of Tea Party anti-tax sit in?  Nope.

Friday, April 15th is a day for middle and high school students to protest “harassment, discrimination, and hate.”  Yup, it’s yet another Astroturfed liberal activism scheme to “raise awareness” to the sad plight of all those alphabet-soup sexually self-identified groups, the LGBTQXYZ crowd, or as I have termed them militant homoculturalists, who are apparently terrorized daily by straight student bullies in American middle and high school across this great nation.

The purported purpose of the Day of Silence is to “make anti-LGBT bullying, harassment and name-calling unacceptable in U.S. schools.”   But isn’t bullying, harassment and name-calling of any student already unacceptable?  Of course it is.  So why do we need another program, another protest day?  Because the struggle is never ever over for liberals hell-bent on destroying a cultural norm like marriage and moral constraints on sexuality.

Despite the myriad of laws on the books protecting homoculturalists from job discrimination, from discrimination in adoption and housing, despite the radical redefinition of marriage and even transgender bathrooms, twenty years and many, many anti-harassment programs later, the Day of Silence is apparently still very necessary.   These homoculturalists demand the indoctrination of the next generation using taxpayer dollars in the public schools — that was the true battle ground for California’s Proposition 8.

The Day of Silence was started by a handful of twenty-something college students twenty years ago flowing out of a class assignment on non-violent protests.  It has burrowed its way into the massive National Child Traumatic Stress Network originally set up by Congress to serve traumatized children.

The Day of Silence is a student effort to protest harassment, discrimination, and hate. Participating students, led by GLSEN, will hand out cards that read the following:

“Please understand my reasons for not speaking today. I am participating in the Day of Silence, a national youth movement protesting the silence faced by lesbian, gay, bisexual and transgender people and their allies in schools. My deliberate silence echoes that silence, which is caused by harassment, prejudice, and discrimination. I believe that ending the silence is the first step toward fighting these injustices. Think about the voices you are not hearing today. What are you going to do to end the silence?”

But just like so many other militant LGBTQ political tactics, the Day of Silence is meant to drive a political agenda  using young, captive, public school tweens and what should be private issues of sexuality.

Now if these homoculturalists would be quiet the other 364 days of the year perhaps we could enjoy the return of privacy to sexual choices and with privacy a return to civility and, dare I say, tolerance of personal difference.