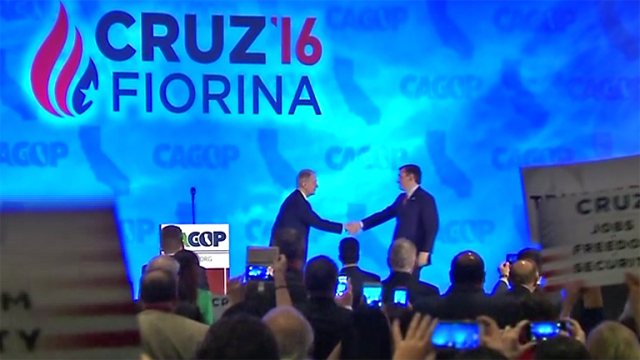 “Never has the California Republican primary election been so critical to the future of our nation,” Wilson said, before introducing Cruz at the California’s Republican Party convention in Burlingame. “America today is in desperate need of a strong, winning Republican leader. And my friends, thankfully, that strong Republican leader has stepped forward in our moment of extreme need and that person is Ted Cruz.”

The endorsement by the former governor, who is considered as a moderate, can help Cruz within the party establishment in the state. On Friday, Cruz picked up the support from Indiana Gov. Mike Pence, who described Cruz as “a principled conservative.” Indiana holds its primary on Tuesday.

Using his remarks to warn the delegates gather that the nomination of GOP front-runner Donald Trump could lead the party into a “down-ticket decimation” when it comes to the House and Senate seat come November.

“We can’t afford a Republican nominee that brings down-ticket decimation of our 2014 hard-won gains,” Wilson said. “We can’t afford a wild card when it comes to a president who will be making critically important Supreme Court appointments. Heaven knows what justices Donald Trump would pick.”

Taking the stage after Wilson introduction endorsement, Cruz told the audience how the state of California is going to see a fierce battle in the upcoming weeks leading to the June 7 primary. “California is going to decide this Republican primary,” Cruz said. “We’re going to be competing for all 172 delegates in California, in all 53 congressional districts. It will be a battle on the ground.”

Portraying himself as the only true conservative in this race, Cruz gave his usual campaign stump speech, arguing this election is critical in deciding the future Supreme Court pick as well as jobs, freedom and national security. This next election will determine the course of the Supreme Court for a generation and I give you my word that every justice I will appoint will be a principled Constitutionalist,” Cruz said. “And I will not compromise away your religious liberty, and I will not compromise away your Second Amendment right to keep and bear arms.“

Cruz also mentioned his rival, reminding them of Trump’s campaign contribution to California’s top Democrats. “You all are experiencing first hand the consequence of those misguided liberal policies,” Cruz said. “Governor Jerry Brown, Lt. Governor Gavin Newsom, Attorney General Kamala Harris: All of them backed policies detrimental to the state, and Trump gave them a combined $12,000.”

This year California will finally determine after many years, the presidential nomination in this epic Republican contest. With 172 delegates in a winner-take-most primary, the largest prize and one of the very last state voting, Californians will decide how the delegates will be divided based on the winner of each of its 53 congressional districts.

Congrats Leftists: With One Rule Protecting 0.3% of Population, the Very Real War on Women Has Begun.