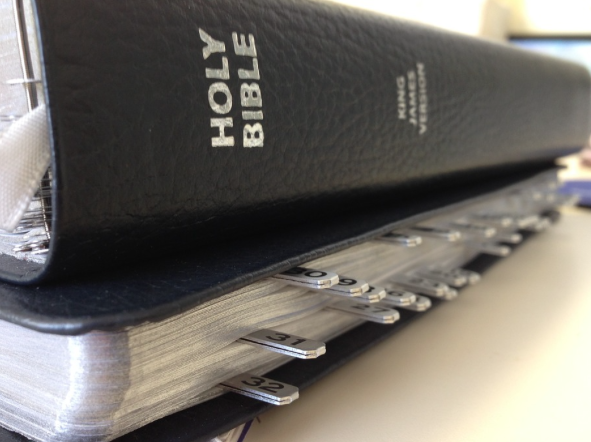 The American Library Association’s (ALA) Office for Intellectual Freedom (OIF) collects reports from libraries, schools, and the media on efforts to ban books in communities across the country. They compile lists of challenged books to inform the public about censorship attempts that affect public libraries and schools.

Calibrated amidst the other nine that were categorized primarily for their sexual theme, lack of age appropriateness for content, offensive language, the Bible hit the request list for banning based on its “religious viewpoint.”

James LaRue, director of the Office for Intellectual Freedom for the American Library Association, says, “You have people who feel that if a school library buys a copy of the Bible, it’s a violation of church and state.”

“The Bible has been targeted nationwide, at times for the sex and violence it contains, but mostly for the legal issues it raises with regard to ‘separation of church and state,’ an advocate for intellectual freedom told the Associated Press.”

The Office for Intellectual Freedom guidelines notes that the Bible “does not violate the separation of church and state as long as the library does not endorse or promote the views included in the Bible.” The ALA also encourages a wide range of religious materials, from the Quran to the Bhagavad Gita to the Book of Mormon. LaRue added that the association does hear of complaints about the Quran, but fewer than for the Bible.

The Top 10 for 2015 is based on 275 challenges recorded by the American Library Association’s Office for Intellectual Freedom last year. The list includes a short description of the reasons individuals gave in requesting libraries to remove the books.

The one chosen as an example for the Bible ban challenge was given by a reviewer of the Kindle version of The Church of Jesus Christ of Latter-day Saints (Author) on Amazon,

“The case for reading it: ‘A few slow sections where the author insists on discussing genealogies and laws at great length, but the overarching plot details a father’s epic quest to create the perfect, worship-able child, only to watch in agony as his child is brutally murdered, after which the father insists that the very world which took his son away learn to accept the ideas his perfect son stood for or suffer a fate worse than death,’ writes Ashley Ann.

(Note: Because the survey does not identify which version of the Bible individuals objected to, we chose a version that appeared as one of the top search results for “The Holy Bible” on Amazon. Also, many reviews focus on the physical qualities of the book — the size and color of the printing, the weight of the paper. For simplicity, we chose the first we found that dealt with its substance.)”

Ashley Ann, who identifies herself as a writer, is also a blogger who laments that she has no following for orphaned poems. She reviewed this book as a novel, missing, or intentionally ignoring the intent, context, scope, audience, religious relevance and significance.

A knowledgeable and credible book reviewer evaluates a book’s contribution to a genre, discipline or field. Ashley Ann seems to have finally garnered some attention for her writing efforts, albeit by evaluating a book considered Holy by over 2.8 billion people in the world in a shallow and amateurish manner.

Regardless, those of us who value the written Word of God can take solace in LaRue’s statement that sometimes the effort to ban the Bible is “a retaliatory action where a religious group has objected to a book and a parent might respond by objecting to the Bible.” He stressed that it is not the library association who opposes having Bibles in public schools.

It would be prudent for the Christian community to become more aware and proactive in countering the escalating culture shift away from the formerly respected Judeo-Christian philosophy that founded the most powerful, successful and richest nation in less than 200 years.

Leo Hohman for WND summed it up best, “Gallup lays the blame for the current anti-Christian state of U.S. schools largely with the last several generations of ‘weak pulpits,’ which inevitably lead to ‘timid pews,’ and the corruption of the halls of government, schools and subsequent generations of American minds.”

Planned Parenthood to Men: Sit Down and Shut Up

For Cruz, A Grassroots Strategy Is Paying Off